Do You Put Up Emotional Walls, Based on Your Personality Type 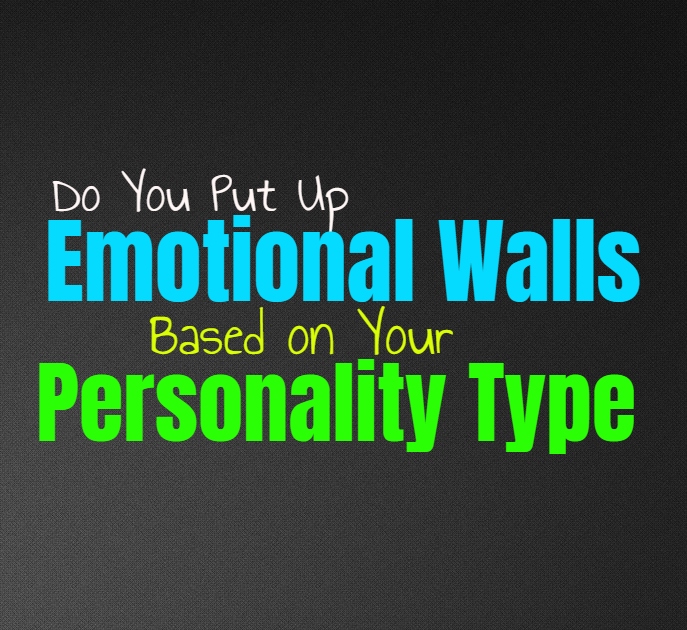 Do You Put Up Emotional Walls, Based on Your Personality Type

Some people are naturally open and enjoy connecting with others, and find it easy to be vulnerable with others. This isn’t something everyone experiences, and for some people it is more comfortable to put up emotional walls. Here is how likely you are to put up walls, based on your personality type.

INFJs do sometimes put up emotional walls, even though people might not fully realize this. They have so many layers and it often takes a long time for people to really see behind these many layers. INFJs don’t do this because they don’t want to make connections, it’s actually quite the opposite. INFJs crave finding someone they can open up to, but they are often afraid of really opening up and being vulnerable. INFJs don’t like experiencing rejection when they open up, and so they definitely build up walls in order to prevent this from happening.

ENFJs do their best to seem like open people but when they think they might get hurt they definitely put up walls. ENFJs do this to protect themselves and avoid getting their heartbroken by someone. ENFJs care deeply about others and this is exactly what causes them to build walls. They might appear strong on the outside but they do have sensitive hearts, and so they want to avoid being too vulnerable in some situations. ENFJs often appear more open than they are, simply because they don’t want people thinking they are closed off.

INFPs try to be more open with their feelings and don’t like building up too many walls. For the INFP it is best to be themselves and to share their feelings whenever it feels right. They follow what they personally believe in and have strong inner morals. For the INFP putting up walls can close them off from opportunities and from living the way they want to. Most of the time they are open people, who can’t really shut themselves off from their feelings.

ENFPs don’t like building up too many walls since it closes them off from new experiences. They don’t want to let themselves become alienated from others and simply want to be able to connect. ENFPs are often open people who wear their hearts on their sleeves. They find it difficult to hold back their feelings and are more naturally capable of opening up. ENFPs might be capable of putting up walls if they have been hurt a lot in their younger years. Sometimes this heartbreak can leave them feeling fearful of completely being themselves.

INTJs definitely put up emotional walls, this is almost something which happens naturally. They just aren’t open with their feelings, even to themselves. For the INTJ being emotionally vulnerable is an extremely challenging experience, and not really something they even know how to make steps towards. For them it is more comfortable to put up these walls and just live their lives focusing on facts and logic. At the same time INTJs do care about their loved ones, and they aren’t incapable of bringing down these walls just a bit.

ENTJs definitely put up emotionally walls, even with the people they love. The ENTJ often wants to appear strong and in control, and so they don’t like exposing their feelings too much. They put up these walls to avoid getting themselves hurt, or to avoid losing control of the situation. ENTJs would rather focus on ways to be efficient and get things done in a more practical sense, rather than dwelling on emotions. For the ENTJ it is more rewarding to feel like they have made their loved ones proud by their accomplishments, rather than having to expose their inner emotions.

INTps definitely put up emotional walls, sometimes so many that they aren’t even sure how to take them down. They build up these walls mostly because they are so much inside of their own minds anyways. INTPs have a hard time really understanding their own emotions and often neglect them for the sake of logic and reason. INTPs can often be fearful of being too vulnerable around others, since they are skeptical people. They might doubt that people can be trusted and so they put up walls to protect themselves from being hurt or taken advantage of.

ENTPs might appear like open people because they are outgoing and strong-willed. They often express themselves in a seemingly open way, but in truth they have plenty of emotional walls built up. ENTPs often use their sense of humor to deflect away from their real emotions, for fearing of exposing themselves too much. ENTPs don’t often know how to handle emotions, and can become uncomfortable with conversations about feelings. For them it is easier to express themselves through sarcasm and humor, instead of just breaking down those walls.

ISTJs definitely put up emotional walls, since they are much more comfortable with practicality and proven methods. For them too many feelings can lead to making major mistakes, and cause them to fail at important things in their lives. ISTJs care deeply about their loved ones, but they show this by taking care of their practical needs. While ISTJs might hold someone close to their heart, it doesn’t make it easier for them to express their emotions and open up about these things.

ESTJs certainly put up emotional walls, even when it comes to the people they love. It can be challenging for them to really open up and show their feelings, for fear of being too vulnerable. They prefer to focus on practical means of getting things done and believe in working towards their goals. While ESTJs care about their loved ones, it is more natural for them ot show this caring in practical ways. They work hard to take care of their needs and show them support, they just aren’t good at doing this in an emotional capacity.

ISFJs are often compassionate and giving people, who do their best to connect with their loved ones. ISFJs want to be open with the people they love and try hard to show their hearts to those people. At the same time ISFJs are capable of throwing up walls when they feel it is necessary. If they can see that someone is just using them and continuing to hurt them, the ISFJ will be able to build up emotional walls in order to shut this person out of their lives and move forward. For them this is about self-preservation, and also about focusing on the people who actually appreciate their kindness.

ESFJs do their best to connect with their loved ones, but they are capable of putting up emotional walls as well. They are very giving and compassionate people who crave making connections with those around them. They do their best to give to the ones they love and be as supportive as possible. When the ESFJ recognizes that someone is just going to keep hurting them, this is when they start building up those emotional walls. The ESFJ does this to protect themselves and to find a way to move on from this connection which is only harming them.

ISTPs do put up emotional walls, but only because they aren’t that comfortable dealing with their inner emotions. ISTPs find it more natural to focus on facts and tangible evidence, and so their emotions can get a bit confusing at times. For them it can be stressful to open up emotionally, and so they often avoid doing this entirely. ISTPs put up walls in order to avoid these uncomfortable situations, and do have more freedom in their lives. It doesn’t mean they are incapable of it though, and certainly can open up if they feel comfortable and safe around someone.

ESTPs do put up emotional walls sometimes, especially if someone is hurting them continuously. ESTPs are often more open than people realize though, especially when they care deeply about someone. They appear more closed off around strangers, and try to seem strong-willed. Deep down ESTPs do care about their loved ones deeply, and so they often let down these walls without even realizing they are doing so.

ISFPs don’t like building up emotional walls, since they want to be open with their loved ones. ISFPs believe in connecting with others and actually have a hard time keeping their feelings hidden. When they are close to someone they often wear their heart on their sleeve, and express themselves freely. ISFPs struggle to really build up walls easily, and instead are naturally open and connected people.

ESFPs are extremely open people and putting up walls is actually very difficult for them. They might try to build up walls when someone hurts them, but they struggle to sincerely do this. ESFPs are just open people who believe in connecting with others and being their truest selves. They have big hearts and believe in connecting with others whenever they can. While they might get hurt sometimes because of this, it is just who they are.