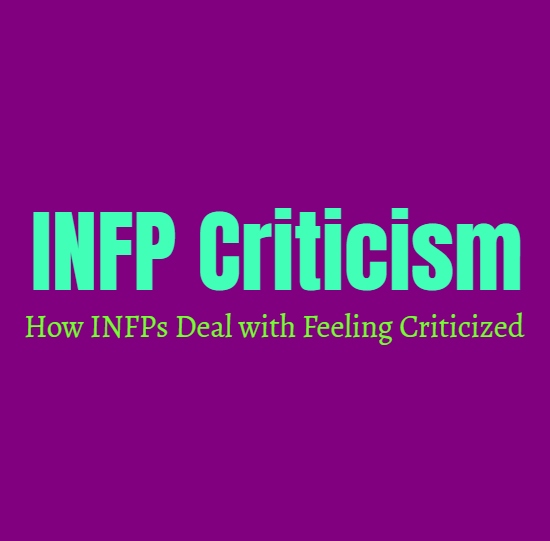 INFPs are certainly sensitive to criticism, even when the intentions behind it are good or helpful. They can have a hard time processing what is being said as a means of wanting the INFP to improve, instead it just feels hurtful. They can logically see that the person is intending to hurt them, but that does not change how they feel inside. There are many reasons why this can be so challenging for the INFP, and it doesn’t mean they should magically just “get over it” or pretend that everything is fine for them. Of course it is important to grow and learn how to improve ourselves, but that doesn’t mean there is anything wrong with being a bit more sensitive to the world around them.

INFPs can respond somewhat defensively to criticism, especially if it is about something which means a lot to them. They find it difficult to really process hearing anything negative about themselves or their accomplishments, and are likely to go silent or become somewhat defensive. When the INFP goes quiet it is because they are withdrawing, and finding it difficult to process their feelings without showing exactly how hurt they are. They don’t necessarily want people to realize they are upset, and so they find themselves attempting to go inside of their own thoughts without allowing people to see what they are feeling. Other times the INFP can become a bit defensive, expressing that they are upset or that they don’t appreciate what the other person has said about them. They might even try to explain their side, and express why the criticism was not necessary or accurate. This can also cause the INFP to avoid being too vulnerable around certain people, and try their best to stay away from anything which could lead to them being criticized.

A reason why INFPs can be so sensitive to criticism is because so much of what they do is deeply rooted in their inner feelings and beliefs. When they try to accomplish something- especially something creative- the INFP puts their heart and soul into this project. When they show this to someone they are often nervous about it, feeling completely bare and vulnerable with what they have done. When another person criticizes or critiques their accomplishment, it feels as if that person is throwing digs at the core of the INFP and who they are. This is an extension of them in so many ways, and so it is difficult for them to distance their feelings from this piece. Hearing someone else say anything negative about what they have done, can feel as if that person is directly attacking the INFPs spirit. The more connected they are to it, the harder it becomes for them to simply see it as someone being helpful. It feels as if they have exposed themselves and someone is now judging them for it. INFPs have strong inner morals and beliefs, and this is a big reason why being criticised can be so hard for them.

Another struggle for the INFP is the fact that they are already their own worst critic. No one criticizes the INFP quite like the INFP, and so they already have negative things lined up for themselves when they do something. They can see the flaws in what they do often more clearly than anyone else can, and so it makes it hard for them to truly share their accomplishments. When the INFP is criticized they have a hard time not taking it personally, since that person has likely said something they already considered or felt about themselves. This is why handling this type of response is truly challenging for the INFP, and can make it hard for them to want to open up and be vulnerable again.

The important thing for the INFP attempting to become stronger against criticism, is to learn to love themselves first. They can struggle to see the good in themselves sometimes, always being their own worst critic. The fact that the INFP is already hard on themselves, makes it so difficult for them to hear these things from anyone else. The first step towards growing that so-called “thicker skin” against criticism, is to learn to accept themselves and their flaws without judgment. For the INFP it definitely starts from within, and so spending more time appreciating themselves and complimenting themselves can actually be incredibly helpful for the INFP. It can feel strange at first, but they need to take time to appreciate their own accomplishments and talents, instead of always seeing where they could improve or be better. In order to withstand outside criticism, they need to learn how to better handle it from themselves and see their own abilities for what they are.

It is also important for the INFP to learn how to recognize the difference between constructive criticism and someone simply being hurtful. If a person is respectfully giving them advice or critiquing something they have done, that is certainly not the same as someone intentionally trying to be harmful. They don’t need to accept this type of behavior from others, and of course that should not be tolerated in the same way as someone who is sincerely just being helpful with the best of intentions.