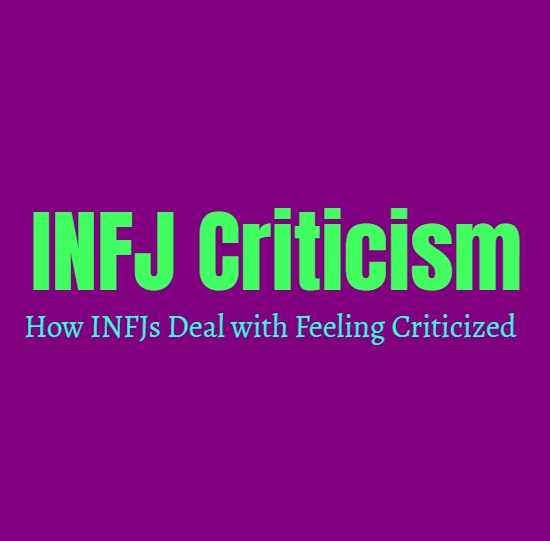 INFJs can definitely struggle when it comes to dealing with criticism, especially from someone they care about. They might be good at masking those feelings, but they can take certain comments rather harshly. INFJs care about how their loved ones view them, and so the smallest things can set them off. They want to be seen a certain way by those special people, making it hard for them to handle anything being imperfect. INFJs can be hard on themselves as well, already setting themselves up to feel a sense of disappointment because of this. They are often their own worst critic, and can see the flaws and mistakes they make rather glaringly. They might see things that aren’t there as well, picking apart every detail so that they feel insecure before even sharing something with others.

Criticism can certainly be a challenge for the INFJ, and they are likely to internalize these emotions as a result. They might not be defensive at first, instead they try to bury those feelings and behave as if they are fine. INFJs don’t like being a burden to others and instead often put on a hard shell which makes them seem rather stoic. Instead of acting hurt or expressing those feelings, the INFJ is likely to repress them and this can fester and cause them to become upset later on. Accepting when someone they love has given them criticism can be difficult, and instead of really dealing with it outwardly they might try and do their best to avoid being a burden with their feelings. INFJs do often want to appear strong on the outside, not allowing people to see their weaknesses. This can make it difficult for them to fully process their own emotions, especially if they feel like they are being selfish by doing so. This is why they can spend a lot of time focused on the needs of others, rather than taking time for themselves and their own desires.

INFJs are sensitive to criticism often because they put a lot of weight on how their loved ones view them. They can be perfectionists and don’t like feeling as if their actions have let anyone else down, and this ties into most things in their lives. INFJs can develop a thicker skin when it comes to strangers, especially as they draw close to certain people they deem special and important. When they are close to someone and let that person in, it becomes truly difficult for the INFJ to process any criticism from them. They might act as if they are not hurt, but in reality they can hold onto these feelings for a long time. When the INFJ truly gives themselves to someone, they become sensitive to how that person sees and treats them. If someone they love gives them criticism in hopes of being helpful, the INFJ might try to process this without getting too upset but it likely still stings a bit. They can be logical people who are capable of understanding where that person is coming from, but it can still be hard to take at times.They might not blame their loved one for what they have said, but it can be discouraging for the INFJ in the end. They might start to feel as if they are not good enough and cannot live up to the expectations of others and themselves.

INFJs are harder on themselves than anyone else could possibly be, which is another reason why criticism can be difficult for them. They can see all of their own flaws and mistakes, and spend a lot of time picking these things apart. This is why it can be hard for them to handle outside criticism, since the INFJ is already judging their own mistakes. They might start to feel as if they cannot be good enough for themselves or others and struggle to really live up to those expectations. This makes them feel distant from others at times, not really knowing if they should open up or share their accomplishments or things they want people to be proud of.

For the INFJ it is truly important to look within and take some time to really consider why this criticism hurts so deeply. In order to be strong in their own beliefs and accomplishments, they need to start loving themselves and work on how to be less judgmental internally. INFJs search for ways to be perfect, which is not possible even for the most hardworking person. They struggle with imperfections and might fear abandonment because of it, and so it is vital that they take time to appreciate themselves better. They can feel a sense of guilt for focusing on themselves, and working through this is also truly important for the INFJ. If they want to work on how to better cope with criticism, then the process begins with learning to accept themselves even if no one else will. The only way to truly feel at peace with constructive criticism, is to see the good in what they have done and understand that improvement isn’t a bad thing.