INFP Romance: Just How Hopeless Romantic the INFP Can Be 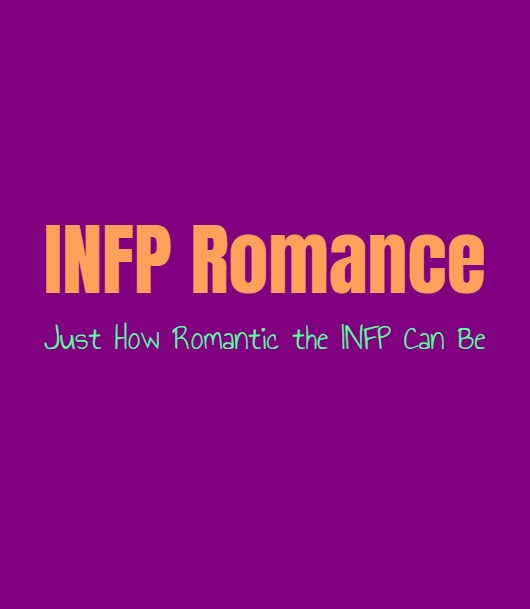 INFP Romance: Just How Hopeless Romantic the INFP Can Be

INFPs are often viewed as the hopeless romantic types, and this isn’t entirely untrue. They do care about and value romance in their lives, but not on a shallow level. For the INFP it is about so much more than what people perceive romance to be, which can cause these romantic desires to be misunderstood. For the INFP romance is often something they hold as important and meaningful, even though there are times where they can feel cynical and out of touch with this part of themselves. Even when the INFP appears more cynical, that doesn’t mean the hopeless romantic part of them will even completely disappear.

INFPs are often naturally romantically inclined people, as they have big and sincere hearts. When the INFP feels something they don’t like bottling these emotions up, instead they want to be upfront about them. It doesn’t feel natural for them to hide from these feelings, instead they feel a deep need to understand them. INFPs follow their hearts and the things in life which make them feel excited and passionate. They don’t want to live only doing what seems pragmatic, as this wouldn’t be true to who they are and what they need. Because the INFP believe in follow their hearts and the desires inside of them, they are often drawn to romance and the feeling of being in love. For them it is about diving into those feelings and allowing them to make their lives feel a little bit brighter. Where other people might be fearful and have their doubts about romance and those complex emotions, INFPs don’t believe in being afraid. This is part of what makes the INFP so brave, because they are open and not afraid to be vulnerable in pursuit of what matters most to them.

To the INFP romance can be so many things, and does not just include grand gestures and clips from romantic comedies. For the INFP it is often more about the emotion behind it, and where the person is coming from when they seek to express themselves to someone else. They can see romance in the slightest of touches, to the biggest of gestures. INFPs believe in romance as being completely upfront about those emotions, even the ones which can be a bit scary at times. They want to be able to woo the person they are interested in, but they also want to feel this in return. Some INFPs can enjoy so many different types of romance, from old-fashioned expressions of love to something more unique and creative. They don’t necessarily become hung up on the act itself, but rather the emotions and intentions behind it. If someone is being insincere and cheesy in hopes of gaining points, the INFP will sense this right away. These grand gestures won’t mean much to them unless they are completely sincere. Someone who expresses their affections openly and tries to show this with a bit of romance, will go a long way with the INFP, even if it isn’t what others might expect as the most romantic thing.

Vulnerability is truly important for the INFP, and this is what they want from their romantic connections. They want someone who is willing to show themselves to the INFP, even if it feels a bit scary at first. They want someone who can step outside of their comfort zones and be able to share who they are with the INFP. They want to give this in return as well, and want their partner to be understanding and patient when they express their own inner feelings and desires. For the INFP romance should be about connecting and about wanting to express how they feel to someone truly special. Sometimes for the INFP just the presence of the person they love is enough, just sitting with them in silence knowing that person cares for them and wants to be by their side. Romance can mean so many things both great and small to the INFP, but all of these faces of romance mean the world to them.

INFPs want to feel consumed by love, and want to allow themselves to completely dive into it. They want the rush of falling and the descent into complete comfort and understanding. For the INFP the entire experience of falling in love and being romantic with someone is a beautiful thing that they want to cherish. While others might see the INFPs romantic notions as silly and impractical, this is because they don’t understand the honesty and bravery that comes with it. INFPs might be hurt by love and by being open about their emotions, but they aren’t afraid to go after the things they want in life. They might go through times of being a bit jaded like anyone does, but the INFP will almost always come back to who they truly are. They need to feel a connection and believe in being open to romance and the things which make them feel truly passionate and alive.