INTP Romance: Just How Hopeless Romantic the INTP Can Be 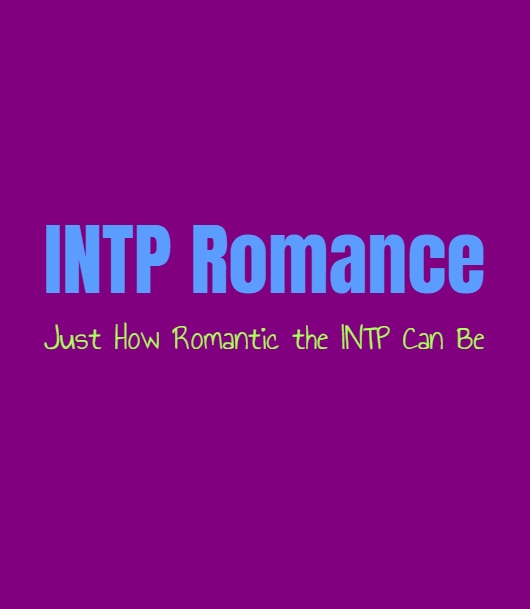 INTP Romance: Just How Hopeless Romantic the INTP Can Be

INTPs are not usually viewed as romantic people, especially since they are more focused on logic. They don’t really feel comfortable expressing their emotions or relying on these feelings in their daily lives. INTPs often push their feelings inside and might even neglect them in hopes of being more focused on accuracy and facts. While they might not appear all that romantic on the surface, that doesn’t mean INTPs are incapable of romantic gestures or being someone who can connect with others. They do often possess a more complex inner mind and array of emotions which most people don’t get to see. INTPs are not just want they appear to be on the surface, and so they might be more capable of romance than is expected based on their logical and sometimes cold appearance.

INTPs are very focused on information and on being accurate about their choices. INTPs don’t like to feel like they are being too vulnerable around others, and this is something which does not come naturally for them. They are much more interested in being more direct and want to follow what they feel is logical, rather than emotional. INTPs know they can trust in facts and information, and for them this comes more naturally. When it comes to relying on romance and their inner feelings it leaves them confused and often uneasy about the situation. They want to be able to be confident in their choices, and if they are going with feelings instead of logic and intuition then the INTP often doubts themselves. This doesn’t mean they are incapable of feeling things very deeply for their loved ones, nor does it make them incapable of romance. This just makes the process a little more challenging for the INTP, since openly expressing things is not easy for them.

Some INTPs even have the heart of a romantic buried underneath their sometimes cold exterior. INTPs do often dream of finding someone who understands them and who they can feel truly connected to. Because of this inner desire to find someone special, the INTP might have more of a dreamer inside of them than people realize. They have creative and rich inner minds, with so many complex thoughts and feelings. INTPs just don’t know how to fully express these inner feelings to others, and so they tend to keep them bottled up. They struggle to find the right words and means of really opening up, especially since they are often fearful of how people will respond or misunderstand them. This causes the romantic side of the INTP to be pushed aside, even though it is often part of them. INTPs can often be hopeless romantics deep down inside of them, wanting to be able to connect with someone and share their souls with that person. When they do find themselves opening up, they can often be drawn to more poetic means of expressing their feelings. The INTP might crave romance in truly creative and special ways, but they don’t always know how to admit this or express it outwardly. For them it is often shown by the way they care for someone’s needs, or do their best to give this person their time and attention. Being able to listen to their partners problems and just be there for them, is often the INTPs way of showing how much they care and are truly interested in who they are. While this is often the way they express their feelings, that doesn’t mean they don’t often wish they could show it in more romantic ways.

The INTP might shy away from outward romance, but that is often more of a defensive reaction. The INTPs heart and their head is often at war, and in most situations they allow their mind to come out victorious. Just because they side with logic, does not mean they don’t possess a passionate and sometimes romantic heart. INTPs want to be able to feel a sense of passion and excitement towards life and towards the people closest to them. When they allow their creative side to show they can often come up with truly romantic and generous ways of expressing their feelings. INTPs might do this in ways that seem a bit corny at times, but they need their partner to realize how sincere this actually is. This is often why they fear being romantic, since they personally feel like it comes out as corny, even when they don’t want it to. For the INTP being more internalized about things and just focusing on what is logical, is what comes naturally. And so when they do try to be romantic with someone, they need that person to appreciate this effort and not shun it away. It takes a lot for them to do this and do feel this type of vulnerability, and they really need someone who understands and appreciates this in the right ways. INTPs might even act like they don’t enjoy when their partner expresses themselves romantically, but in truth they often appreciate it immensely, they just don’t always know how to best respond.