INFJ Romance: Just How Romantic the INFJ Can Be 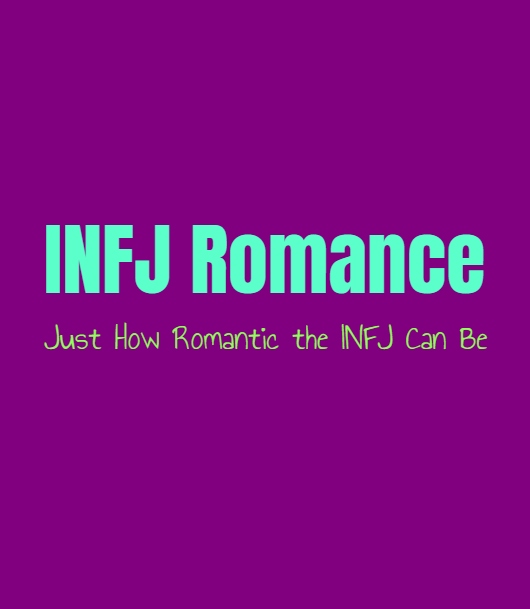 INFJ Romance: Just How Hopeless Romantic the INFJ Can Be

INFJs are not necessarily viewed as outwardly romantic people, since they often keep things to themselves. They are much more private people who don’t really feel comfortable expressing all of their feelings or romantic ideals to those around them. They can often build up walls which makes it difficult for people to truly see what they are feeling or thinking. While INFJs might not appear romantic to people around them, that doesn’t mean they don’t possess the heart of a true romantic. For the INFJ these feelings are just so personal, and at times they try to ignore them in focus of more a cynical mindset. INFJs are contradictory and complex people, which is why they are so often confusing to people who aren’t willing to look beneath what they can see.

While INFJs might have a cynical side which makes them appear more practical than romantic, it isn’t necessarily all that they are. Most INFJs are closet romantics, with big hearts and passionate spirits. They want to be able to experience love in all of its forms, especially the romantic kind. INFJs just don’t find it easy to express these desires to those around them, since most of their innermost feelings they have a tendency to keep buried. They build up walls for fear of getting hurt or of having people misunderstand them. INFJs don’t want to be judged for all of these complex inner thoughts and feelings, and so they keep them behind the many layers they possess. For the INFJ being open about their romantic feelings can be a frightening thought, and so they often appear much more practical and even cynical on the outside.

While some INFJs who have been jilted a few times in their lives, might actually have a more cynical outlook, it often isn’t who they are deep down. INFJs are passionate people who truly want to experience all of the things life and love have to offer. INFJs often dream of a love which is romantic and beyond anything they have experienced, something truly worth their time and heart. They have such rich inner minds and so much of their desires and thoughts are wrapped up inside their imagination. The INFJ likely spends a lot of time daydreaming about romance and of finding a true soulmate. They might even envision what it would be like to find someone who can romance them in return, someone who might live up to their sometimes high standards. The INFJ can have many different ideas about romance and what is truly romantic, but it almost always comes from the heart. For the INFJ the best kind of romance is creative and unique to the person they are falling in love with. They want someone who is special and truly unique, and not just following some Hollywood notion of what romance should be. The INFJ is more likely to be wooed by someone who is willing to take risks and show their own sense of romance, without looking to others for what appears right.

INFJs are often old souls, and so they might even be drawn to an old fashioned idea of romance. This doesn’t mean they are closed-minded or interested in something boring, it just means they enjoy the idea of not being afraid to be a bit corny. INFJs don’t mind the idea that the romance isn’t necessarily express in a “cool” or perfected manner, and might enjoy someone who fumbles a bit in their attempts. They just want to feel special, and to them romance is only meant to be an expression of those innermost feelings and desires towards someone. They enjoy a grand gesture once in a while, but they have their own idea of what this means and what will make them feel truly inspired. Once the INFJ is comfortable with someone and feels safe opening up, then they are eager to expose this romantic side to them. INFJs might even be likely to go all out in the way they express themselves, with things like poetic words and lavish dates. They enjoy making the most out of these feelings, and want to allow themselves to be wrapped up completely in love. For the INFJ the struggle is getting to this point and reaching that moment when they feel safe enough to fall. They often fight against it, and take a long time before they really trust someone enough to catch them. Once the INFJ finally reaches that point where their walls come down, they often have a truly romantic and passionate spirit. They enjoy making their love interest feel special and truly adored. They will go out of their way for this person, and for the INFJ being able to feel consumed by love is something they often dream of, and also fear at the same time.