The Likelihood That You Will Be Superstitious, According on Your Personality Type 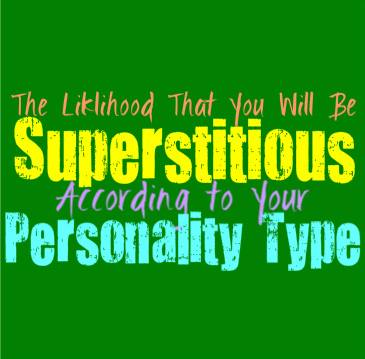 The Likelihood That You Will Be Superstitious, According on Your Personality Type

Some people have a tendency to be a bit superstitious, even people who can be extremely logical. They find themselves exploring different possibilities to a point where they can start believing things that aren’t quite solid and tangible. While superstition doesn’t always mean a fear of black cats and ladders, it can also be someone who becomes concerned about little things like what type of energy they are putting out into the world. Here is how superstitious you can be, based on your personality type.

INFJs are complex people, and so it can be challenging to peg whether or not they will dive down certain rabbit holes. Some INFJs will find themselves much more spiritual than superstitious, although they might become curious sometimes. The INFJ who is a bit interested in things that are unusual or hard to understand, might find themselves dabbling in more superstitious behaviors. They are very sensitive people, and so they respond to what they see and connect with from the world around them. While INFJs can be very logical people, they can also possess a side to them which travels down less solid paths.

ENFJs are very susceptible to the world around them, and will connect strongly to the emotions they sense from others. Sometimes their sense of empathy combined with their intuition, can cause them to possess superstitious beliefs. ENFJs are very level-headed in some aspects, but can be somewhat open in other ways which leads them to considering options that they normally would not. The ENFJ who doesn’t quite grasp where their intuition is coming from, might find themselves being a little bit superstitious from time to time.

INFPs base their choices and beliefs on their emotions and their strong inner morals. While they are drawn to their feelings and whatever they are connected to most, that doesn’t mean they are more likely to be superstitious. For the INFP it is about following their own path and their own hearts, and so sometimes the idea of being superstitious can feel foolish to them. Some INFPs might wander down this path though, and if they do their superstitious tendencies might just be because they want to experience something a little bit whimsical and even unusual.

ENFPs might base things on emotions but that doesn’t mean they are susceptible to being more superstitious. They often enjoy considering different ideas and options though, and might have moments where they dive down this path just to explore it. For ENFPs their tendency to be superstitious is more of a curiosity than an actually belief. They simply enjoy being able to consider different possibilities, often for the fun of the experience and not truly because they believe in it.

INTJs aren’t usually superstitious people, since they are much more focused on things that can be proven. While they have strong intuitive abilities, this is based on information they collect subconsciously not on some superstitious beliefs. INTJs often struggle to really follow anything that they cannot see or prove using their inner minds and logic. For them being superstitious can seem a bit foolish and even a bit useless at times.

ENTJs are often very factual and logical people, and so being superstitious can seem a bit odd to them. Some ENTJs might be curious about different beliefs, but this is often because they want to be knowledgeable and not because they actually follow these notions. ENTJs might actually find some people to be a bit foolish if they believe in more superstitious ideas. While they do enjoy focusing on things that might seem a bit odd to others, most of the time ENTJs are drawn to superstition.

While INTPs are very logical people, they also enjoy exploring different ideas and options. While they might not believe in something deep down, they still enjoy considering it and juggling the thought for a while. INTPs might find themselves curious about superstitious ideas, and so in order to really learn they need to adapt it in a more believable manner. They want to really dive into things and learn as much as they possibly can, without walking in with some preconceived notion.

ENTPs aren’t usually drawn to superstition, but that doesn’t mean they won’t consider it. ENTPs are more naturally logical people who believe in things that they can prove and which actually makes sense. While they do make their final decisions based on facts and proof, ENTPs are naturally very curious people. They enjoy exploring different options, even the ones that feel a tad bit foolish at first. For the ENTP it is important to really dive into things, and sometimes this means adapting beliefs that they don’t end up keeping.

ISTJs are rarely superstitious people and will usually find this to be a bit foolish. They are more interested in things that they can see proven in front of them. ISTJs base their beliefs on facts and logic and rarely do they find themselves interested in things which are more emotional. For the ISTJ it is important to focus on the things that are tangible and so they are rarely superstitious people. If they have grown up in this type of environment it can be challenging for them, but even then they often find it to be foolish.

ESTJs are very practical and factual people, and so they are rarely superstitious. They often believe in things that are tangible and can be proven, instead of the things that are more emotional. ESTJs care about their family and work hard to provide for them, and so they don’t like allowing things to stand in the way. ESTJs really don’t trust things that they cannot see proven, and so superstitious beliefs are rarely something they are drawn to.

ISFJs are caring people who work hard to provide for the people they love. While they might have a spiritual side, they are rarely superstitious people. Most of the time they focus on things that are more practical and easy to understand, rather than ideas that are a bit unusual. For ISFJs being superstitious often feels wrong, and even a bit foolish. They care about their loved ones and can sometimes adapt ideas because of them, but most of the time being superstitious just isn’t a good fit for them.

ESFJs are rarely superstitious people, in most situations they can find these beliefs to be a bit foolish. They want to take care of their loved ones and will do whatever they can to make them happy, which sometimes means considering some beliefs they normally wouldn’t. For the ESFJ this can be difficult though, since they are more interested in practical beliefs. If they grew up in a superstitious environment it might be easier for them to follow it, but for most this can feel a bit wrong.

ISTPs are not often superstitious people, since they are more focused on things that are tangible. It can be hard for them to believe in things they cannot see, and are more focused on proof. For the ISTP being superstitious usually seems a bit foolish and isn’t something they are often drawn to. While they try to give people space to be themselves, that doesn’t mean they will entertain ideas that can sometimes make them feel a bit embarrassed for people.

ESTPs are rarely superstitious people and will usually find things like this a bit foolish. While there is a side of the ESTP that is focused on facts and logic, they can possess a more emotional and explorative side. They are curious people who enjoy considering different angles, and so they might be drawn to ideas that aren’t really expected. Most ESTPs won’t end up being superstitious or even spiritual, since they are usually more interested in things they can see proven.

ISFPs are driven by their inner emotions and sense of morals, which can sometimes take them down unusual paths. ISFPs might sometimes be drawn to superstitious ideas, but sometimes they are more spiritual instead. Some ISFPs do find themselves curious about things that are superstitious, since they have a truly curious nature. They enjoy diving into new things and follow whatever feels right in their hearts.

ESFPs can be spiritual people, but sometimes they are drawn to more superstitious ideas. They are susceptible to things that play into their emotions, and so they consider different ideas and options. ESFPs enjoy exploring things and want to be able to follow their hearts where they might lead. They are adventurous individuals who want to seek out things that inspire them and make them feel more alive and present in the world around them.