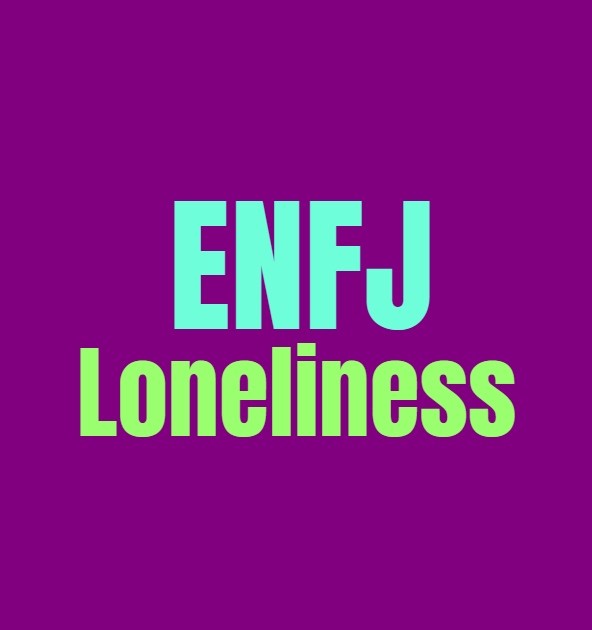 It can surprise people to think of the ENFJ as being lonely, since they are often surrounded by people. They make connections easily and often have plenty of close friendships, but that does not make them free of loneliness. They can be lonely even when they are surrounded by people, and don’t necessarily feel a bond which is deeper. ENFJs might have plenty of people close to them, but they still struggle to feel truly understood. They might be extroverts but they still experience similar paradoxical qualities as the INFJ personality type. This can make it hard for the ENFJ to ever feel like people get them, even though they understand those around them very well.

ENFJs spend so much time trying to take care of everyone else, and this can cause them to forget to tend to themselves. Not caring for their own needs makes it difficult for the ENFJ to sincerely connect with people the way they want to. ENFJs sometimes distance themselves from those around them, but they don’t do this intentionally. They strive to be perfect so that they can be sure they are always taking care of the people in their lives. They don’t want to show weakness, and instead want to show that they are capable of caring for everyone else and that they are strong. This strength is something which can actually alienate the ENFJ, since they rarely open up and express their feelings to people. They don’t want to burden anyone, and this is often what causes them to feel so lonely. While they might have loved ones around them, it isn’t easy to open up and express when they are hurting. The fact that they keep these walls up to seem strong, causes the ENFJ to never truly feel understood. They keep people from seeing their weaknesses and so they keep them from seeing their true selves. The ENFJ ends up feeling lonely because they don’t know how to express when they are hurting and so they feel like they don’t have people to turn to. This doesn’t mean the ENFJ has to be lonely, but they do put themselves in this position. In order to actually feel a connection which goes beyond their image, the ENFJ needs to let down those walls.

Being someone who cares for everyone else can certainly be challenging for the ENFJ. While they might want to feel connected and close to people, it isn’t and easy process for them to expose their insides to someone. They might want to feel close but they don’t want to guilt others with their own needs and feelings. It is important for them to find the balance and learn how to make these deeper connections, or else they can still feel this loneliness even when they are around people they love and care for.

The ENFJ is often viewed as the best friend of so many people, but it can be hard for them to feel truly close to anyone. They might be extroverts who are good at making friends, but that doesn’t mean they actually feel a deeper connection with these people. ENFJs might struggle to find people who they feel truly understood by, and who they feel this sort of lasting bond with. When the ENFJ is truly close to someone they feel something beyond their friendship, which makes them feel valued and appreciated. ENFJs have complex inner minds and they rarely feel like the people around them understand who they are inside. They might have many friends who consider the ENFJ to be their best friend, but it is hard for them to feel this way about anyone else. This doesn’t mean they don’t love and care for these people around them, it just means they are missing something which makes them feel a connection which really sparks their soul.

One of the biggest things the ENFJ needs in order to deal with those feelings of loneliness, is to feel safer with imperfection. They struggle to let go of this image and they want those around them to see them as strong and capable. ENFJs don’t like showing their cracks and this is something which can make it hard for them to ever truly connect. They might want to express when they are struggling, but this is easier said than done for them. In order to feel the type of connection they want the ENFJ needs to work towards showing their imperfections and accepting that people who truly care for them with love them for who they are. They need to drop their walls or else they won’t be able to lean on the people around them in the way they truly need to. Only in sharing who they are inside and trusting that they can find someone who will love them for what they see, will the ENFJ be able to deal with the loneliness they feel.

A big part of dealing with loneliness is also in learning about themselves and what they want. The ENFJ needs to dive into their own feelings more, rather than try to bury them in hopes of being strong. When they learn to understand themselves and trust in their intuition, they can become much more comfortable being on their own. ENFJs will always want to find people to connect with, but this is certainly a step towards dealing with those lonely times.