How Do You Respond to Having an Audience, Based on Your Personality Type 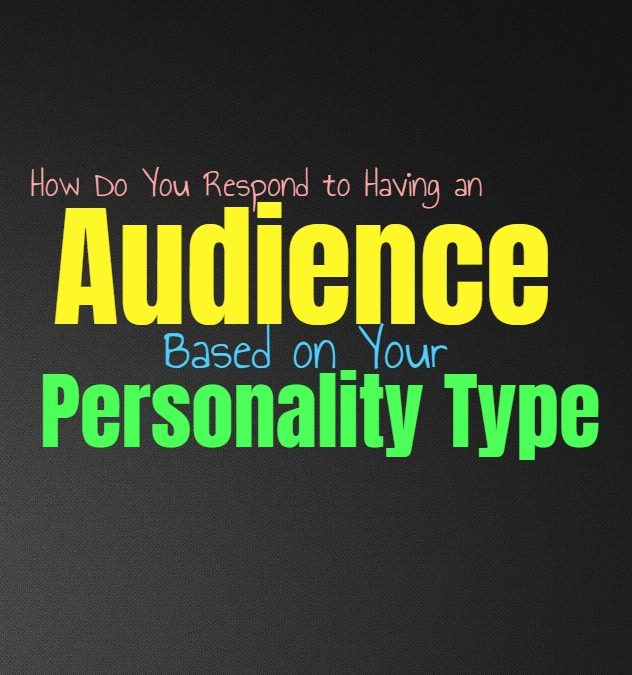 How Do You Respond to Having an Audience, Based on Your Personality Type

INFJs don’t always feel comfortable with having a big audience, and the idea of being watched can add a lot of pressure for them. They don’t like feeling this type of weight on their shoulders to perform a certain way, especially if loved ones are watching. When INFJs feel as if their actions are being observed and judged, it can sometimes make them feel uneasy. For other INFJs it can do the opposite and cause them to rebel against this, especially the much younger INFJ.

ENFJs don’t mind having an audience most of the time, since they already put a lot of pressure on themselves. They want to be perfect for their loved ones and work hard to accomplish their goals efficiently. ENFJs already put so much pressure on themselves constantly, and so it easily feels like they have an audience even when they don’t. This is because the ENFJ considers how people will feel about their actions and they want to be sure they are doing the right things.

INFPs can sometimes handle having an audience fairly well, especially in a performance setting. They are often creative people who can put themselves into another mindset in order to perform something in the way they want to. For them it depends on the situation, since they can certainly handle having an audience for a short time. Some INFPs even thrive on this when they are feeling social, since they can be outgoing and amusing people. They simply cannot handle this on a constant basis and need time to recharge afterwards.

ENFPs often respond to having an audience by performing even more for the people who are observing them. They are outgoing and charming people and oftentimes they use this as a means of playing into their audience. ENFPs can often handle being watched fairly well, and know how to grab the attention of others with ease. They use their sense of charisma as a means of making people like them, and finding ways to really perform to their audience.

INTJs can handle having an audience in the right circumstances, especially since it can give them a platform. INTJs want to be able to spread the truth and they are good at uncovering information. For them it is important to share this knowledge and so sometimes having an audience can be useful in this way. For them it is rewarding to be able to remove ignorance from the world, but at the same time they don’t want a constant audience because they need time on their own.

ENTJs don’t mind having an audience, especially if they have a lot they want to share. ENTJs enjoy spreading the truth and are highly efficient people. They also don’t mind feeling as if people are watching them in general, since they are naturally outgoing and don’t feel added pressure in a negative manner. If the ENTJ feels as if they are being watched it is simply an incentive to push themselves even harder to succeed. When they have an audience they see this as a challenge to perform better and push themselves even further.

INTPs don’t usually enjoy feeling as if they are being watched, since they don’t like being judged either. For the INTP it can sometimes push them to perform better if they have an audience, but it often depends on the specific audience and situation. Most of the time they don’t appreciate the added pressure or the feeling like people are pushing them to do something a certain way. INTPs enjoy their space and independence, and so unless the audience is there to watch them perform in a creative manner, INTPs really won’t appreciate it much.

ENTP
ENTPs often respond to having an audience by performing even better and more intensely. They enjoy taking on the challenge and want to find a way of using their own strengths in these situations. ENTPs are often outgoing people who can charm others and find means of entertaining them. They don’t mind this challenge of having to perform a certain way for an audience, and might even enjoy it sometimes.

ISTJs don’t often enjoy having an audience, but they will do their best to take on this challenge. If they know someone is watching their performance they will simply do whatever it takes to improve and be perfect. ISTJs don’t like failure and so knowing that people are watching them means they need to really up their game in order to impress everyone around them.

When ESTJs have an audience they often take this as a challenge and a reason to perform even better. They don’t like making mistakes and for them failure really isn’t a viable option. When the ESTJ is being watched or has some kind of an audience they will do whatever it takes to be impressive and efficient in their tasks.

ISFJs can sometimes be uncomfortable with the idea of having an audience, since it adds even more pressure on them to perform. For the ISFJ it is important to be someone who can impress those around them, especially their loved ones. When they have an audience it simply means they can’t make mistakes and fix them later, they want to be able to do everything smoothly and gracefully.

ESFJs can sometimes become uneasy when they have an audience, especially if they were not prepared for it. If the ESFJ has time to prepare for some kind of performance then for them having an audience is simply a new challenge to push them. They don’t like the pressure of an unexpected audience though, since it leaves them feeling stressed and needing to prevent even the smallest mistakes from occurring.

ISTPs actually don’t mind having a bit of an audience, especially if they don’t have to interact with them as much. They don’t care if people are observing them, they are still likely to do things on their own terms. ISTPs just don’t want to feel controlled or obligated to live their lives under the rule of others. They don’t mind if they have an audience and can often enjoy performing in front of others in some ways.

ESTPs sometimes enjoy having an audience and even thrive on it. They are outgoing people who are often good at using their charm to entertain others. ESTPs do sometimes feel added pressure when they have an audience though, and don’t like this when they are feeling judged or like people are going to blame them for any mistakes they make.

ISFPs can often be good performers and so in these settings they enjoy having an audience. For the ISFP it depends on why they are being observed, since if it is about their work and ability to perform efficiently, this can actually cause them stress. They don’t like feeling judged or like they need to be perfect for those around them, since this leaves them feel stifled.

ESFPs are often more than happy to have an audience, and prefer this over being lonely. ESFPs are outgoing people who often bring in an audience naturally with their behavior and charming personalities. ESFPs do like having this attention and often thrive on it, finding new ways to entertain the people around them.