Can You Handle Rudeness, Based on Your Personality Type 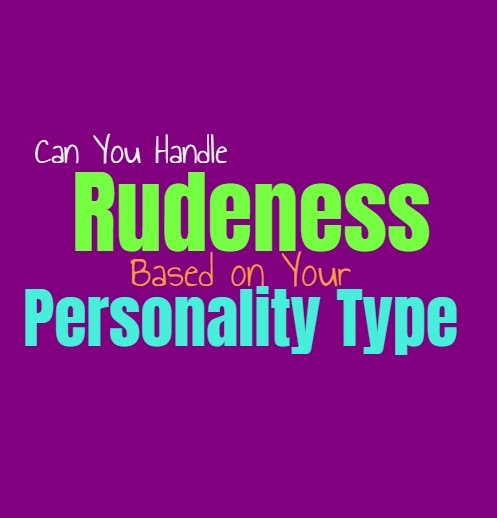 Can You Handle Rudeness, Based on Your Personality Type

No one particularly enjoys experiencing rudeness, but some are better at handling it than others. For some people it is simply about know how to respond or operate with someone who is rude, for others it is best to just avoid them completely. Here is how you handle rudeness, based on your personality type.

INFJs really don’t appreciate rudeness and can have a hard time really dealing with it. At first they might attempt to keep their cool in order to avoid confrontation, but they can only hold onto this for so long. Eventually the INFJ will find themselves becoming frustrated and might even snap on the person who is continuously rude. They especially won’t stand for this if it affects someone they care for, and they don’t like seeing them be attacked by this rude person. INFJs do often try to avoid this type of altercation, but they won’t be afraid of standing up for themselves and others if it feels necessary.

ENFJs don’t like rude people but they often try their best to diffuse these situations at first. They are good at approaching people and finding ways to make the situation more comfortable for everyone. If someone starts off being rude the ENFJ might attempt to change their mood in hopes of making the situation better. They are good at putting people at ease and so sometimes this words rather effectively. If it does not work and this person continues to be rude to everyone, ENFJs aren’t afraid of confrontation when it feels necessary.

INFPs really don’t like confrontation, but they also strongly dislike rude people. They become annoyed with people who cannot seem to be kind to those round them and are simply rude for no reason at all. INFPs understand having a bad day, but they don’t appreciate someone who is consistently rude to those around them. They often try to avoid getting into drama with this rude person and will try their best to avoid them at all costs. If this cannot be done then they are likely to reach a breaking point where they unload their feelings and frustrations onto this rude person.

ENFPs are outgoing people who do their best to be friendly and just get along with everyone. They want to be happy and don’t like allowing negativity to cloud their lives and bring them down. They want to be able to get along with people and so when someone is rude the ENFP will try to change this at first. They will do their best to be friendly and make this person feel a bit happier, even by being playful towards them. If this person continues to be rude then the ENFP isn’t afraid of standing up for themselves and shutting this person down.

While INTJs don’t appreciate rudeness, they do their best to ignore it most of the time. They don’t get caught up on the emotions or behavior of others, unless it is persistent and meant as a slight against them. Most of the time INTJs are capable of dealing with someone who appears a little bit short tempered or rude, as long as it isn’t directed at them. If the person is intentionally rude towards the INTJ then they are not afraid to set their boundaries and make it clear they are not accepting this type of behavior.

ENTJs don’t really accept people who are rude to them, and will make their boundaries clear. If they are around someone who is constantly rude then the ENTJ is not afraid of standing up for themselves. While they don’t consider it rude if someone is simply striving for perfection and wanting to be efficient, they do believe in common courtesy and politeness. If someone is being clearly rude then the ENTJ will feel a need to express how they feel about this, without fear of how that person will respond.

INTPs really don’t appreciate rudeness but most of the time they just try to stay away from these types of people. Instead of stirring things up, they would rather avoid someone who is rude and obnoxious. They often feel like it is a waste of their time and energy to call someone out, especially if this rudeness only happens once. If someone is consistently rude then the INTP likely wants to stay away from this person, and might even start tossing passive aggressive comments in their direction.

ENTPs don’t mind a little drama in their lives when things get stagnant, and so they aren’t afraid to call someone out for being rude. They might do this in a way which makes this person’s rudeness obvious to others as well, since they don’t want to waste their time getting into an argument without some sort of evidence. ENTPs don’t like when people are rude, especially not if they do this in a sneaky or passive aggressive manner. They will likely try to call people out on this in hopes of making it known to everyone.

ISTJs can usually ignore when someone is rude, since they like to keep to themselves most of the time anyways. If a person seems rude or obnoxious to the ISTJ they simply try to avoid them as much as they can. They would rather not waste their time or energy on someone who is only going to bring them down. For the ISTJ it is better to be around people who are going to help them move forward, and rudeness is not something they appreciate. They are definitely capable of calling someone out if their rudeness persists, and are not afraid of setting boundaries.

ESTJs can often respond to rudeness, with their own sense of rudeness. They don’t have much respect for people who cannot follow rules or be polite when they are around others. They don’t expect people to be outwardly friendly, but they do expect basic courtesy. When someone is rude the ESTJ is not afraid of saying this, or of making their feelings about this individual very clear. They will make their boundaries known and show that they are not okay with this type behavior.

ISFJs are not great at dealing with rudeness, and often want to avoid these types of people. ISFJs care about maintaining a sense of harmony and so at first they might try to calm this person down or pass of their rudeness as misunderstanding. They try to be friendly and kind to others and want to do their best to keep the peace in their environment. If someone continues to disrupt this peace, then  the ISFJ will try to remove them completely in hopes that things will no longer be so tense.

ESFJs become truly frustrated with rude people and can often snap back at them. They believe in being courteous and kind to those around them and want to maintain a sense of harmony. For the ESFJ rude people can really leave them feeling on edge and annoyed. They might try to respond by being friendly and will do their best to change this person’s negative mood. If this does not work then the ESFJ won’t be afraid to express how this behavior is not acceptable to them.

ISTPs often deal with rudeness by trying to avoid the rude person completely. They don’t want negativity to drag them down and so they would often rather avoid it entirely. If someone continues to be rude then the ISTP is not afraid of calling them out, or even of embarrassing them in front of others. Sometimes the best way to shut someone down who is being rude, is to make them feel bad about it.

ESTPs try their best to ignore rudeness, and will just try and be friendly themselves. They don’t like focusing on this type of negative behavior and really just want to do their own thing. ESTPs try to avoid people who are rude and might even ignore them completely. If the rudeness persists it can often cause the ESTP to snap when they are feeling on edge, and be rather rude in response to this behavior.

ISFPs really don’t appreciate rude people and often want to avoid them entirely. For them it is better to avoid the drama and discord, and just stay away from people who are going to be rude in this way. They don’t want negativity in their lives and so the ISFP would rather be around people who inspire them and make them happy. Rude people are something to avoid, not something to have to confront or deal with for the ISFP.

ESFPs often try to be positive and don’t like allowing others to bring them down. At first they try to be friendly to the rude person in hopes that they can change their mood. If their behavior persists then the ESFP is not afraid of standing up for themselves or even of calling this person out in an obvious manner. They will like ask them why they are in such a bad mood, and tell them they are being rude with complete transparency.