Can You Handle Being Around Slow People, Based on Your Personality Type 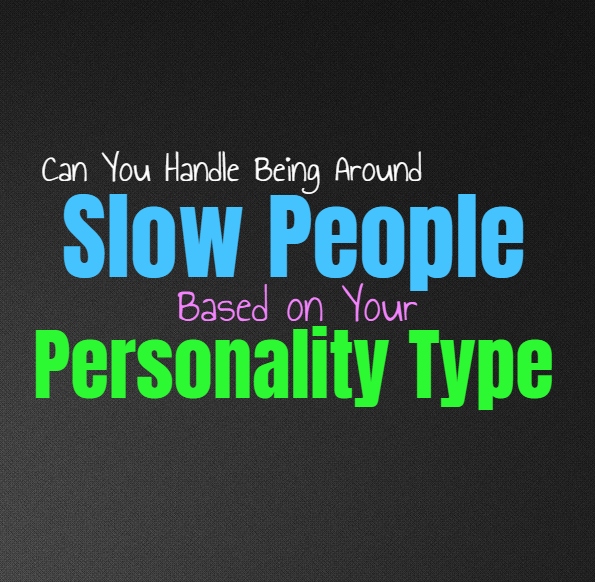 Can You Handle Being Around Slow People, Based on Your Personality Type

INFJs don’t mind people who like to take their time with some things, especially something that they are being particular about. For the INFJ a fast pace isn’t always necessary, especially when they want to focus on something which is important to them. They sometimes prefer taking their time on things and just allowing themselves to absorb everything they are experiencing. For the INFJ being rushed can be stressful and they rarely do well around people who like to push others and are constantly moving too fast.

ENFJs can sometimes be fast-paced people when they are focused on getting something done, so they can become frustrated with those who get in their way. ENFJs try their best to be patient and don’t want to upset anyone, so they try their best to take things slow when they have to. ENFJs will become a little bit anxious when people are moving too slow, especially when there is something they truly need to get taken care of. They often have so many things they are juggling at once, and so they want to be able to get things finished properly.

INFPs really don’t like being rushed through things, and most of the time prefer to take life a little it slower. INFPs really aren’t likely to become upset if someone is moving a bit too slow, instead they might enjoy having the extra time to think things through themselves. INFPs don’t like becoming impatient about these types of things, since they enjoy having space and time to really process everything. INFPs have a lot inside of their rich inner minds, and so for them it is upsetting when people seek to rush them.

ENFPs don’t often mind things going a little bit slow, since they enjoy taking their time with certain things. For the ENFP it is rewarding to be able to observe things and really pay attention, and so rushing isn’t always what they are looking for. It often depends on the situation for ENFPs, since there are circumstances where they are hoping for something different. There are some times when they prefer to move a little bit faster, since they want to feel challenged and inspired by what is going on.

INTJs can become a little bit frustrated with people who take things too slow, especially when they are trying to get something done. They aren’t always great at being patient when someone is standing in their way, and instead would prefer to handle most things themselves. They are driven people who believe in maintaining focus on their goals, and when someone is just taking their time it can seem like laziness to the INTJ. They want to push forward with things when they can, but that doesn’t mean they are capable of making sure things are perfect before they move forward.

ENTJs are very driven people and sometimes this causes them to be a bit fast-paced. When they are focused on getting something done it can cause them to become annoyed with people who move a bit too slow. When someone is taking their time the ENTJ sometimes sees this as inefficiency and even laziness, and so they can become a bit impatient with this behavior. ENTJs believe it is important to always work hard and push themselves to get things done quickly and efficiently.

INTPs don’t usually mind when someone takes their time on something, and don’t become as upset with slow moving people. For the INTP it does often depend on the situation, since certain circumstances call for a quicker pace. When the INTP is focusing on something they want to finish quickly or move through at a move chaotic speed, then they often prefer to do this on their own. When it comes people who simply move slower because they are trying to process everything, the INTP really tries not to let this bother them.

ENTPs can sometimes become impatient with slow moving people, but it depends entirely on the circumstances. When they are trying to keep moving and don’t want someone holding them back, then they do lose patience with slow paced people. When the ENTP notices that someone is simply taking their time and trying to process everything, then the ENTP will do their best to let this happen without losing their patience.

ISTJs can become rather impatient with people who move at a slow pace. They are often focused on getting things done and don’t like when anyone stands in their way. With all of the things the ISTJ has to do, they sometimes find themselves losing their patience with people who move slow and make it difficult for them to finish their own tasks in a timely fashion. For the ISTJ people who move slowly with their tasks sometimes seem lazy, especially if they are more than capable of getting things done quickly.

ESTJs definitely find themselves struggling to be around people who get things done at a slower pace. They prefer to push themselves to get their work finished efficiently, as well as quickly. To them people who simply move at a snail’s pace are often lazy, and don’t put enough pride and effort into what they do. ESTJs often have so many things on their mind and so much they need to get done, and so taking it slow can be stressful for them.

ISFJs do sometimes struggle to hold onto their patience when they are trying to juggle many tasks. ISFJs understand that there is time to take things slow, but when there are things that need to be finished they don’t like being held back. ISFJs often have many things to take care of, since they are always taking on new chores for their loved ones. People who hold them up or make this difficult, can be rather annoying for the ISFJ. When it comes to certain things they don’t mind taking it slow, as long as it doesn’t prevent them from doing something important.

ESFJs can become impatient with people who move too slowly, especially when they are working on something important. ESFJs believe in working hard and getting things done, and often have many tasks that they need to focus on. They often care for their loved ones and will take on their chores as well, making it so they need to really push themselves in order to get everything done. For the ESFJ it is important to know when to take their time, but they also believe in being efficient when the task calls for this.

ISTPs can be somewhat fast-paced when it comes to certain activities, and don’t like feeling stagnant. For the ISTP moving too slow can bore them and leave them feeling like they don’t have much inspiration around them. They don’t mind slowing things down from time to time though, and enjoy the occasional relaxing atmosphere. It depends on the situation and the mood the ISTP is currently experiencing.

ESTPs can be fast-moving people who like things that are active and entertaining. When they are around slow people it can become frustrating, especially if it holds them back. ESTPs believe in getting their tasks done quickly, and don’t like feeling restrained or bored. When the ESTP is around very slow people, it leaves them feeling more anxious and a bit like they are trapped. They crave excitement and want to feel like they can pick up and do something new without a moment’s notice.

ISFPs don’t mind taking their time with some things, and become more annoyed with people who try to rush through everything. When it comes to really soaking up the moment and enjoying themselves, ISFPs don’t want to feel like someone is pushing them. There are times when they also don’t want to feel stagnant, but this all depends on the ISFP and their current mood. They follow their hearts, and so sometimes this does mean soaking up the moment.