Here’s How Each Personality Type Handles Public Displays of Affection 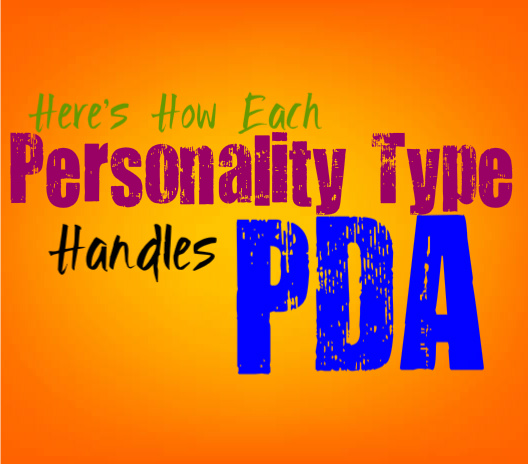 Here’s How Each Personality Type Handles Public Displays of Affection

While some people love physical and public displays of affection, other people find them a bit appalling. Here is how each personality type handles PDA.

INFJs are often very reserved people in public, even though on the inside there is much more going on. They simply don’t want to feel exposed in front of others, which can make them a bit shy to express themselves. When INFJs truly love someone, they can often surprise others by their ability to show this openly. They are unique people though, with complex inner minds and unusual ways. While some INFJs might shy away from physical affection entirely, there are some who would be open to PDA with the right person. For those INFJs it is almost like they are in a special bubble where only those two live.

ENFJs are very outgoing and enthusiastic people, who don’t mind expressing their affection towards someone. When the ENFJ truly loves a person they will not be afraid to show this in public. They often want to flaunt their feelings, so that everyone knows how truly happy they are. The ENFJ will not be afraid to participate in a little PDA, especially when they truly care for someone. ENFJs don’t mind letting the world know how they feel when they are in love, but they won’t want to be immodest about it.

INFPs are somewhat internal and reserved people, which can cause them to avoid certain public displays. They don’t want the attention drawn towards them, so they won’t do anything that is overly dramatic. INFPs will however express their feelings if the mood strikes them, and don’t want to make their partner feel shunned. The INFP will be capable of a little PDA, as long as it is tasteful and not going to upset anyone around them.

ENFPs aren’t afraid of being expressive in front of others, and will not let shame control them. If they are in love with someone they certainly aren’t going to be shy about how they feel. ENFPs are not afraid of public displays of affection, since they want to let the world know how they truly feel about their partner. ENFPs don’t get embarrassed easily, and they certainly won’t be ashamed of their love for their partner. They do however, dislike when they are with someone who fawns all over them in an overbearing manner.

INTJs are certainly not openly affectionate people, and will often become uneasy with public displays of this. They prefer to keep their romantic lives to themselves, and rarely want it to be viewed by complete strangers. INTJs aren’t usually the most romantic people, and prefer to express their affections in much different ways. They rarely want to take part in PDA, and might find it to be a bit obnoxious when they witness other people doing so. INTJs are not the type of people who want to vie for attention of others, which makes them prefer to keep their romantic lives to themselves and their partner.

ENTJs are not the most openly affectionate people, and might dislike being overly romantic in public. They don’t want to be obnoxious people, and might find it annoying when they see others being too grossly affectionate in public. ENTJs don’t mind a small amount of PDA though, and do enjoy letting their loved ones know that they care. They aren’t ashamed of their love for their partner, they simply don’t feel happy being overly expressive in public places.

INTPs definitely don’t mind a little bit of PDA with someone they care deeply for, but it might make them slightly anxious. They don’t enjoy becoming center of attention, and dislike expressing themselves too much. They might dislike anyone seeing them publicly display their feelings for someone, and might feel like it exposes them too much. INTPs do prefer to keep their relationships to themselves, and dislike when too many people witness their true feelings.

ENTPs often do not mind a little PDA, and simply enjoy doing what makes them happiest. If they feel like expressing their affection for someone, they won’t be afraid of what others might think. ENTPs sometimes enjoy doing things simply because it pushes the boundaries and maybe even pushes a few people’s buttons. If the ENTP cares for someone deeply, they won’t be held back by what other people will think. If they want to show their affection in public, they won’t hesitate to do this.

ISTJs are somewhat prudent and reserved people, who dislike openly expressing their feelings. They don’t want to display their affections towards someone publicly, especially not in a physical way. They don’t mind small things, like holding hands or hugging, but they don’t want to be too overt about it. ISTJs don’t believe that complete strangers should witness their affection towards their partner, at least not in such an awkward way.

ESTJs often do not mind public displays of affection, and will often hug and kiss their loved ones. They don’t really care if people feel uncomfortable by it, since they are doing what makes them happy. ESTJs are often proud of their romantic interests, and want other people to know this. They don’t want their partner to think they are ashamed of them, so they will be more than comfortable with a little PDA>

ISFJs are affectionate and warm people, who don’t mind letting people know when they are in love. They don’t want to be immodest about their displays of affection though, and dislike having people witness anything that makes them uncomfortable. They do enjoy letting their loved ones know that they are proud of them, and don’t mind a modest amount of PDA. ISFJs simply don’t want to do anything that will be shameful or over the top, and like to keep their behavior polite and acceptable.

ESFJs certainly don’t mind PDA, especially with someone they care deeply for. They enjoy being able to show the world how they feel and might like to make it clear that they are not ashamed of their feelings. ESFJs want their loved ones to feel appreciated and truly cared for, which includes displaying this in a public setting. The ESFJ often enjoys being physically affectionate towards their favorite people, especially when it comes to romantic partners.

ISTPs are not the most open people, and aren’t always fans of PDA. They can become a little bit uneasy with these sort of displays, especially if they witness other people participating in it. Ultimately though, ISTPs prefer to do what makes them happy and what feels right in the present moment. They won’t let fears hold them back in life, and enjoy taking on new and exciting challenges that are presented to them.

ESTPs certainly don’t mind public displays of affection, and might even enjoy laying claim over their romantic partners. They want other people to know how they feel, and who they are connected to. ESTPs don’t mind people witnessing their displays of affection, and often just enjoy doing what they like in the present moment. They are very in the moment people, who enjoy doing whatever feels right for them. If they care deeply for someone the ESTP won’t be ashamed to let other people witness this.

ISFPs are affectionate and warm people, especially towards their loved ones. They don’t mind displaying their affection in public, and often become swept up in the moment. They are very present and enjoy being a part of the physical world around them. ISFPs want to follow their heart and do whatever makes them happiest, which is why they often don’t mind a little PDA. If they want to express their affection in that moment, they won’t let their heads get in the way.

ESFPs certainly don’t mind a little PDA, and often enjoy feeling free to express whatever they please. If they are swept up in the moment the ESFP will be expressive and affectionate towards someone they care deeply for. ESFPs simply enjoy living in the present moment, and do not want to be held back by fear or hesitation. They want to be happy and have fun in their lives, whatever that might entail. If they care for someone the ESFP will be more than comfortable displaying this in front of others.