Here’s How Good You are At Looking on the Bright Side, Based on Your Personality Type 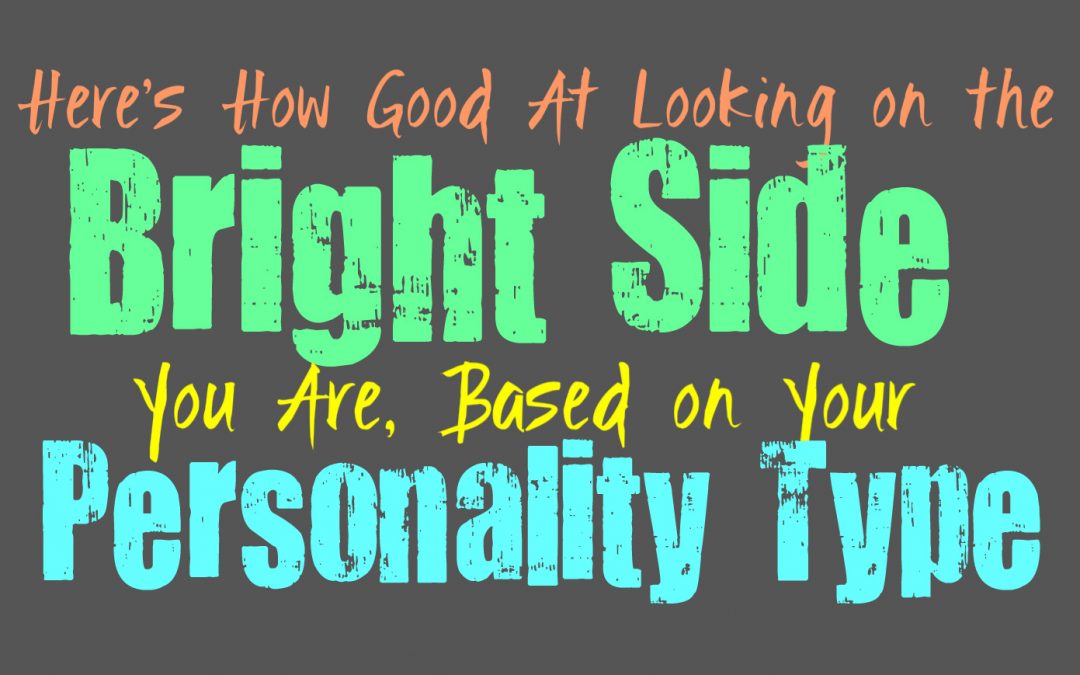 Here’s How Good You are At Looking on the Bright Side, Based on Your Personality Type

While some people seem to be more capable of seeing the negative in things, others almost always put a positive spin on it. Here is how good you are at looking on the bright side, based on your personality type.

INFJs often see things as much more complex than just the bright or dark side, they often see both. INFJs don’t need to put a positive spin on everything and would rather face what is truly happening. They aren’t the type to constantly try to turn things into something light, especially if there are important aspects that need to be faced. INFJs can certainly look on the bright side when it comes to their loved ones though, and will try to make things happier for them.

ENFJs are definitely capable of looking on the bright side of things, especially for their loved ones. They will try to put a positive spin in order to bring up the mood and make sure their loved ones are okay with the situation. They definitely can recognize when things are a bit bleak, they simply believe in doing their best to improve things rather than to help bring them further down. ENFJs care about others and their main goals is to provide for and take care of them.

INFPs aren’t really the type to simply look on the bright side, and would rather face up to whatever the truth is. They see things in their own way, and aren’t often afraid of seeing the darker side of things. INFPs don’t like pretending that everything is positive and fine, instead they would rather focus on what is sincere and meaningful. For the INFP simply looking on the bright side is almost like lying, since it means denying and running from the truth.

ENFPs are actually good at looking on the bright side of things, since they often enjoy being positive. They can become weighed down by too much constant negativity, and believe in doing their best to focus on the best possible outcome. ENFPs become upset when everyone around them feels the need to focus on negative things, instead they would rather be around those who are capable of seeing the bright side.

INTJs aren’t really fans of just looking on the bright side, instead they want to face the truth. INTJs pay more attention to facts and what is clearly laid out in front of them. They often find people who deny the truth in favor of being positive, to be a bit foolish. They would rather face things and accept what is wrong rather than bury everything. INTJs are imply more interested in focusing on the truth, and making choices that are based on facts.

ENTJs aren’t really fans of looking on the bright side, instead they would rather focus on what is true. ENTJs try to observe the evidence in front of them in order to be sure about what is actually going on. They are driven by logic and reason, and simply putting a positive spin on things often feels like a lie to the ENTJ. They are loyal people though, and will do their best to inspire their loved ones to move forward and make things better.

INTPs aren’t really fans of looking on the bright side, instead they would rather look at facts and statistics. They rarely just try to put a positive spin on things, since this is based on emotions and feelings. Instead INTPs want to pay attention to the facts and try to figure out what the truth really is. People who prefer to just look on the bright side are often neglecting to pay attention to the things that are right in front of them.

ENTPs do like to remain strong and positive about the future, but that doesn’t mean they ignore the negatives. Instead ENTPs would rather pay attention to the facts and simply find ways to make the best of these situations. Even a negative situation is something they are capable of overcoming, but that doesn’t mean they are denying the truth. ENTPs know that observing the facts and the truth is the best way to find a solution to their problems.

ISTJs aren’t really fans of looking on the bright side of things, instead they would rather look at the facts. They focus on what is true and right, and prefer to find ways to solve their problems. ISTJs often become frustrated with people who need to always put a positive spin on things, instead they value those who are honest about what is truly going on.

While ESTJs try to remain positive and focus on fixing their problems, that doesn’t mean they feel the need to constantly look on the bright side. Instead ESTJs would rather focus on the facts and work to find ways to overcome their struggles in life. They don’t like burying their head in the sand and simply pretending that things are positive when they aren’t.

ISFJs are definitely the type to look on the bright side, mostly for the sake of keeping harmony in their environment. They don’t like to dwell on negative things and would simply rather try to make the problem go away. ISFJs care about their loved ones and want to do whatever they can to make them happy. They strive to look on the bright side in order to make sure that everything goes smoothly and they can comfort the people they love.

ESFJs are often capable of looking on the bright side for the sake of the people they love. Their main focus is taking care of others, and ESFJs sometimes need to be positive in order to do this. They will try to see the bright side of things and will work towards finding a solution to help those around them. ESFJs like being able to keep the peace, and they believe in doing whatever they can to comfort the people they love most.

ESTPs can sometimes look on the bright side of things, but mostly because they like to focus on living in the present. They want to be positive and try to overcome the challenges laid out in front of them. ESTPs don’t like dwelling on negative things, instead they want to try and solve the problems in an efficient manner. They do believe in focusing on facts though, and want to find reasonable ways to make things work.

ESFPs definitely try to look on the bright side of things, and believe in always being positive. They dislike allowing negative emotions to drag them down and hate being overwhelmed in this way. ESFPs enjoy being able to see the silver lining in everything situation and enjoy being the one to lighten up the mood. ESFPs are caring people who want to make their loved ones happy and strive to be there for them when they can.