Here’s How Good You Are at Creating Hype, Based on Your Personality Type 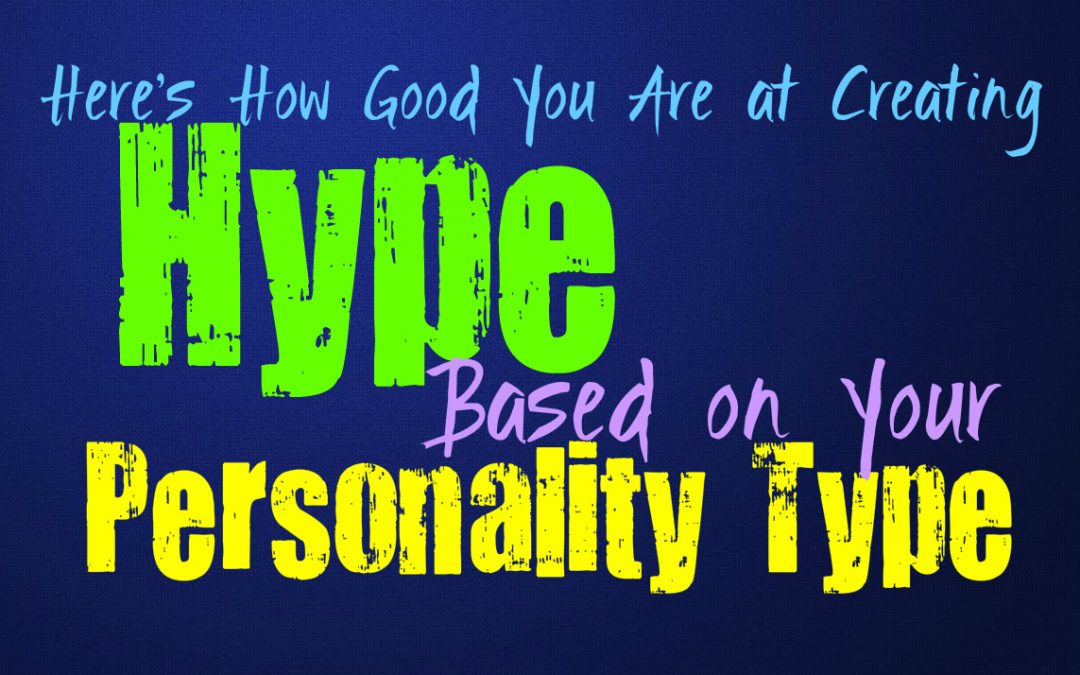 Here’s How Good You Are at Creating Hype, Based on Your Personality Type

Some people are naturally good at hyping people up and creating a sense of excitement about something. This often makes them good salespeople, or sometimes just great at getting the party started! Here is how good you are at creating hype or excitement, based on your personality type.

INFJs aren’t naturally enthusiastic or excitable people in most situations, but they do have a strong awareness of others. They can definitely become different people when they are around their loved ones, but most of the time they seem reserved around strangers. While INFJs might not appear like hype facilitators, they actually can be rather good at it in certain circumstances. If the INFJ feels comfortable adjusting the mood of the room, they are often very capable of doing so. They have a strong awareness of the emotions of others and this helps them figure out the best way to create some sort of hype.

ENFJs are definitely great at creating hype when they want to, especially since they are so strongly in touch with the emotions of others. ENFJs can often find ways to create a certain emotion in the room simply by coercing those around them. They are so connected to the feelings of other people that it often comes naturally for the ENFJ to be capable of creating a sense of excitement or hype when they want to. They understand what people need in order to get them feeling excited or enthusiastic about something.

INFPs can be rather different around their loved ones than they are around strangers. They often hold much of themselves inside and only share their quirkier qualities with the people they can truly trust and rely on. INFPs can definitely create hype when they are around the right people, and often know how to get them excited. When the INFP is passionate about something there is a natural energy that exudes from them, and this certainly causes others to become hyped about it as well.

ENFPs are enthusiastic people and this often makes it easy for them to create hype when they want to. They are passionate about many things in life, and this often exudes from the ENFP. When they want to get people together and create hype about something, the ENFP is more than capable of doing this. Their charm and ability to connect with people makes the ENFP truly hard to refuse. When they are trying to get people excited about something they often know the right words to say and the right energy to bring to the table.

INTJs often don’t feel the need to create hype over things, especially if they need to drum up false enthusiasm. They can definitely create excitement when they are around people who are eager to learn, since INTJs do like being able to inform others. This helps them become good teachers, especially when they are around the right audience who is open and capable of following what the INTJ is showing them. INTJs simply don’t have the energy to manifest some fake excitement in order to create hype for those around them.

ENTJs are good at creating hype when it comes to pushing people towards a specific goal. When the ENTJ has a group of people working on something together, they know how to unite them and get them excited about something. For the ENTJ it is more about accomplishing something meaningful with a certain level of efficiency, and to them that is worth creating hype with those around them. They do this in a more strategic and driven manner, while trying to motivate others towards a united goal.

INTPs aren’t really fans of having to create hype towards something, and sometimes struggle to find the motivation to do this. They often know which things are going to become popular but they aren’t good at drumming up false excitement. Even if the INTP is enthusiastic about something, they don’t find it easy to express this outwardly. Their lack of emotional expression can sometimes make it challenging for INTPs to create a sense of hype with others.

ENTPs are definitely good at creating hype when they want to, and are naturally charming people. They have larger than life personalities which help them draw others in. ENTPs often know how to get people excited about something, especially when they are already passionate about it. For ENTPs creating hype can be a fun way to challenge themselves and to push others in a certain direction. They might not want to do this all of the time, but sometimes it can be enjoyable to get others to join in with them.

ISTJs really aren’t fans of having to motivate or create hype with those around them. They are more interested in getting things done, and having to inspire others can become a bit exhausting. ISTJs rarely feel the need to create hype or excitement in their environment, and would prefer to let people feel however they do naturally. ISTJs also aren’t emotionally expressive people, so creating some sort of false enthusiasm isn’t something that would be easy for them.

ESTJs can create hype in some situations, especially when they are around the right people. Around the people who look up to and admire the ESTJ it can be easy for them to create hype and excitement. They are often capable of motivating people to get things done, especially with something they believe to be important. ESTJs value efficiency, and they will often do whatever it takes to ensure that things get done to their high standards. Sometimes this means getting people excited for something, in order to motivate them in the right direction.

ISFJs understand the emotions of others, and often work to create harmony in their environment. If they feel like their loved ones should be excited about something, then they will definitely try to create some sort of hype. They are often good at this, since they naturally understand the people around them and what their needs are. The ISFJ can use this understanding to motivate the people in their lives to become more excited and enthusiastic about something.

ESFJs are definitely good at creating hype, and this often comes from their ability to understand others. They have a strong awareness of the emotional state of other people, which helps them navigate these feelings. ESFJs can often create a mood in their environment simply by coercing others in the right direction. If the ESFJ wants to create hype they often know what to say and do in order to get people heading towards that emotion.

ISTPs aren’t really fans of creating hype, and would rather give people a chance to feel how they please. If the ISTP is excited about something they might want their loved ones to join them, but they don’t want to force them to become hyped about it. ISTPs just enjoy giving people space and would rather focus on doing their own thing. They aren’t really hype pushers, instead they give their loved ones space to be themselves without pressure.

ESTPs are fun and adventurous people which does help them create hype in certain situations. While they might not be good at affecting a larger group, they are great at coercing the people close to them. ESTPs know how to inspire others to take chances and to jump into something new with them. When the ESTP wants to create hype with their loved ones they often do this by showing them their own excitement, and this can become infectious.

ISFPs aren’t often fans of creating hype with a large group of people, but they can do this with their loved ones. When the ISFP is around someone they care for, they are often great at inspiring them and getting them excited about something. ISFPs do have infectious personalities, they simply don’t feel comfortable sharing this side of themselves with everyone. With the people they trust the ISFP can definitely create a feeling of hype and excitement towards something.

ESFPs are excellent at creating hype, since they are the natural party animals of the personality world. They enjoy making every moment fun and exciting, and often want to bring others along for the ride. The ESFP often knows how to get everyone excited about something, simply by putting off a certain energy. They become so enthusiastic and passionate that this becomes infectious and rather hard to avoid.