Do You Believe in Coincidences, Based on Your Personality Type 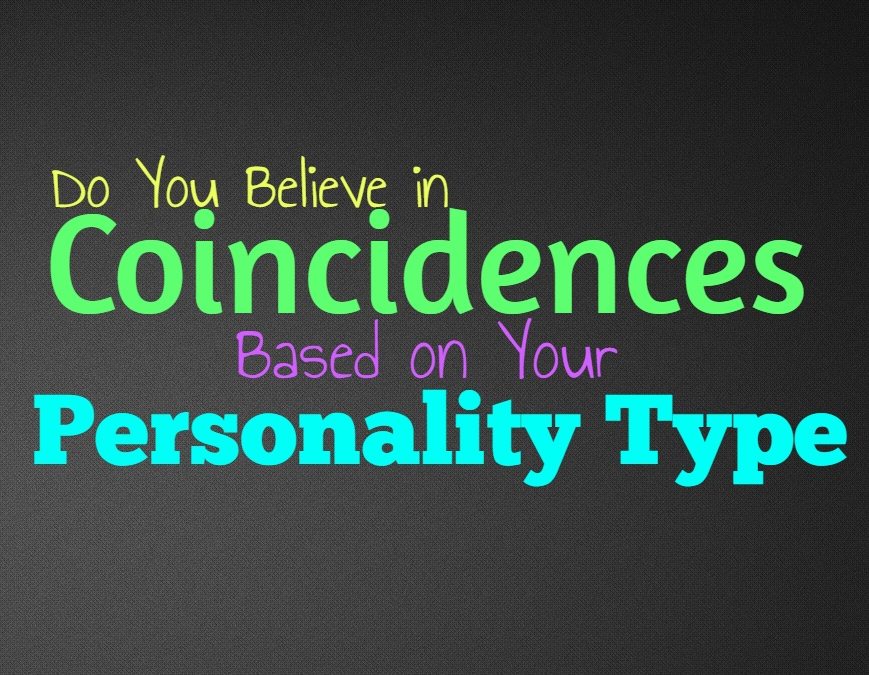 Do You Believe in Coincidences, Based on Your Personality Type

INFJs might believe in small coincidence, but they often feel that the larger things are meant to happen. They don’t often obsess that even the smallest of things happen with intent, since they try to be a bit more practical and logical with the way they approach things. They might have moments where they deny their instincts and act like they don’t believe in a sense of destiny, but deep down they do. INFJs don’t want to live their lives feelings like everything is just a coincidence, since this lacks a sense of meaning and that is deeply important for them.

ENFJs often believe that smaller things in life can be a simple coincidence, but when it comes to big picture they want things to possess more meaning than this. ENFJs seek out things that holder a stronger value to them, and so they often believe in the idea of destiny or a greater purpose. For ENFJs it can be upsetting to think that everything is just coincidence or luck, and can cause them to lose a sense of hope for the future. While the ENFJ who is feeling a bit disillusioned might pretend they only believe in coincidence, this often isn’t who they really are inside.

INFPs don’t usually believe in coincidence and want to find a deeper meaning in most things they see or experience. For them it is important to find the value and purpose in life, and not just subscribe to the belief that things happen based on luck or coincidence. INFPs often believe in destiny or fate, or in the very least that things in life do happen for a reason. They might not always know the apparent reason, but they want to seek it out and search for ways to connect with their choices and what happens to them.

ENFPs don’t often admit that they believe in destiny, sometimes wanting to keep this to themselves. The depth of the ENFP isn’t always something that expresses itself obviously to others, but they are complex and truly deep thinking people. They can appear to just believe in luck or coincidence, when they often have a strong interest in destiny. For ENFPs it is best to search for meaning in everything, especially the more important things that happen to them.

INTJs are very factual and practical people, and so they don’t often believe in things like destiny. While they believe in searching for a greater meaning in things, they approach this from a logical point of view. INTJs often feel that they make their own fate, and so they do believe that some things might occur as just a coincidence instead of some sort of deeper purpose. While they do believe in coincidence, INTJs don’t want to just leave things up to luck.

ENTJs are efficient people who believe in focusing on the facts of a situation. Because of this more logical mindset they rarely find themselves all that interesting in believing in things like destiny or fate. Their lack of belief in destiny often causes the ENTJ to believe that coincidences do happen, and often. At the same time they don’t like just leaving things up to coincidence or luck, and feel it is important to take matters into their own hands.

INTPs might believe that some things in life are based on coincidence, but they like to approach things from many different angles. For the INTP it is important to consider whether or not something might be part of a bigger picture, and maybe they happen with more intention. INTPs might be logical people but they do sometimes believe in things that cannot quite be proven, they just find themselves constantly battling back and forth with this.

ENTPs definitely believe that many things in life happen based on coincidence or luck. They try to approach information from many different angles and often consider whether or not something is a coincidence or happened with more intent. While ENTPs might consider the idea of destiny or a great purpose, they often find themselves more drawn to the explanation that things happen as a result of our actions, or simply because of coincidence.

ISTJs often believe that things happen based on the choices people make, or simple coincidence. They aren’t likely to believe in things like destiny and often feel like they make their own path in life. Because of this ISTJs do believe some things happen because of coincidence, but at the same time they dont like just leaving things up to luck. For the ISTJ it is important to take responsibility for their actions and work to make things happen the way they want.

ESTJs believe in making things happen themselves, and so they don’t believe in things like destiny. They do often believe that some things in life happen based on coincidence, but they don’t like just leaving things up to chance. They try hard to escape luck or coincidences, since they want everything in their lives to happen with their own purpose and goals in mind. They work hard to get things done their own way and can be a bit controlling because of this.

ISFJs do believe that some things in life happen simply based on coincidence, but they might holder a deeper belief in destiny. While ISFJs are practical people, there is often a part of them that holds out hope for something bigger than themselves. They might be focused on getting things done and accomplishing their goals, but they can sometimes possess a romantic spirit which drives them to believe more in fate than in coincidence.

ESFJs often battle with their belief that things are either a coincidence or actually destiny. ESFJs are practical people but they can sometimes possess a more romantic spirit. This makes it difficult for them to really decide if they believe in coincidences in life, or if they feel like things actually are part of some bigger plan or greater purpose. While they might not believe in large coincidences, they often do believe that smaller things happen just based on luck.

ISTPs do believe that some things happen just by sheer coincidence, and don’t often hold onto the belief that everything in life happens for a reason. They are often practical people and have a hard time believing in some sort of greater purpose. Most ISTPs feel like plenty of things just happen based on luck or coincidence and they are usually just find with that thought.

ESTPs do believe a lot of things happen based on coincidence, but there are times when they overthink things a bit. They might try to chalk things up to coincidence, but find themselves analyzing the situation and will search for something underneath the obvious. For ESTPs it is more natural to believe that things just happen and not to feel like things are based on fate or destiny.

ESFPs often battle with their belief in coincidence, since they are often more inclined to believe in something greater. They want to follow their hearts and go after whatever feels more inspiring for them. For ESFPs it isn’t rewarding to believe in coincidence, since destiny is something they often seek out. They want to feel like their actions have a meaning and that they are moving towards something truly rewarding in their future.