Here’s How Much of Party Animal You Can Be, Based on Your Personality Type 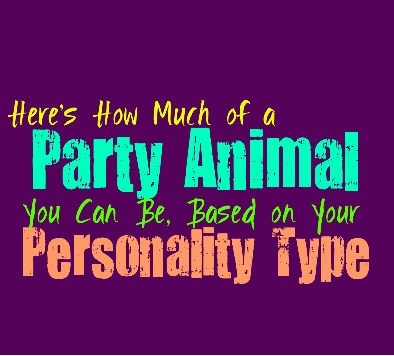 Here’s How Much of Party Animal You Can Be, Based on Your Personality Type

Some people are naturally good at being the life of the party, others are much more like wallflowers. For some it is thrilling to have a good time and be a bit over the top, and so they earn the title of party animal. Here is how much of a party animal you can be, based on your personality type.

INFJs aren’t usually big party animals, since they often become overwhelmed by too much social interaction. They can often become the wallflowers at big parties, especially once the socializing has started to take its toll. They do enjoy being around others and might push themselves to be outgoing in a party situation, especially when they are younger. As they get older though the INFJ will likely become more comfortable being who they are, and will feel less inclined to force themselves to be the party animal. This just usually isn’t their thing, they prefer to be in more personal social situations.

ENFJs are social people who can sometimes be seen as the party animal. This is often in a more responsible way, but they do enjoy letting loose and having fun with their friends. When the ENFJ is younger they might take on the partier role, especially since they want to be someone who others like. They are also amazing hosts and hostesses, who can throw excellent and well put together parties. While ENFJs might not like holding this party animal title, they prefer to be someone who others see as fun and outgoing.

INFPs aren’t usually party animals, and might be likely to be seen as the wallflowers. They really don’t like being forced into overwhelming social situations, and prefer to be on their own most of the time. They don’t usually like being the party animal since they become drained rather quickly when they are in super social situations. INFPs are fun people who enjoy being playful and sometimes goofy with their loved ones, but they often prefer this in smaller groups. INFPs often find one on one time to be much more ideal than a party situation.

ENFPs can go through a party animal stage when they are younger, since they are social and outgoing people. ENFPs enjoy being someone that others like, and so they can try to fit into the party animal persona when they are younger. As they get old the ENFP might grow tired of this setting, and want things that more personal and reasonable. They might prefer being in a smaller group when they are older, but that doesn’t mean they don’t like to have fun. ENFPs are great at being the life of the party since they have such sociable and outgoing personalities.

INTJs really aren’t party animals and they don’t often enjoy these types of overwhelming social situations. INTJs become drained by people rather quickly, and so large groups can be somewhat torturous for them. They prefer to be in one on one settings and don’t like being forced into socializing. While INTJs are good at keeping up with party settings, it just isn’t something they usually enjoy. They might attempt to fit into it for a while, but they will quickly realize just how exhausting it is for them.

ENTJs are outgoing people who can often fit into the party animal setting, but they become somewhat bored of it. They enjoy having fun but usually prefer to be with a group of people they know and like. ENTJs can be rather picky about who they let into their lives and so constantly encountering large parties can be a bit tiresome. They do enjoy having a good time and so they certainly will be capable of being a party animal when they are in the mood for this type of gathering.

INTPs are rarely party animals, even though they might attempt it for a short time. They do go through phases since they enjoy being able to experience new things and push themselves. The INTP might go through a time of partying and trying to be a social butterfly, but it certainly isn’t who they are. They will become drained and want to be by themselves more, since too much social interaction can definitely exhaust them. INTPs are happier with one on one interactions, and they certainly aren’t natural party animals.

ENTPs can be party animals sometimes, especially when they are going through a bit of a phase. They like having a good time and want to experience new things, and sometimes that means branching out socially. ENTPs are outgoing people who are good at getting attention and being the life of the party. They definitely enjoy being someone that others have fun with, and can be over the top sometimes. ENTPs might go from being the party animal to wanting to be by themselves the next moment, since they do need time to process things on their own.

ISTJs are rarely party animals, since they actually become drained by this type of social interaction. They prefer to be on their own most of the time, or connection one on one with someone. ISTJs can become impatient with people in party situations, and don’t like over the top and obnoxious behavior. They certainly know how to have a good time, parties just rarely seem like true fun for them. They might prefer smaller get together, things that are more thought out and actually allows for some relaxation.

ESTJs are capable of being party animals, especially when they are younger. When they are in a situation where they need to socialize and interact in order to be liked by others, they can certainly live up to this. ESTJs are social and outgoing people, who simply want to fit into their group. ESTJs know how to be the life of the party, even though they can become annoyed with this after a while. They do prefer to be in more tight knit situations, and enjoy one on one conversations.

ISFJs aren’t usually party animals and might be more likely to be the wallflowers. They are good at hosting parties and events for their loved ones, they simply become drained after too much social interaction. ISFJs do their best to provide for their loved ones and want to make them happy in any way they can. They work hard to be social and outgoing, but they do become exhausted after a while. They really aren’t party animals and often find people who are to be a bit over the top.

ESFJs aren’t usually drawn to the partying life, but they can be very social people. If they are close to friends and loved ones who enjoy partying, they might try to fit into this popular, party animal role. It is something ESFJs can often fit into, but they don’t usually hold onto this that long. They usually prefer to interact with people in a more personal sense, and don’t really like having to be a constant party animal. While ESFJs can fit into this role if they need to, it can be a bit boring to them after a while.

ISTPs can be party animals sometimes, especially since they enjoy having a good time. While they do like to have fun, ISTPs don’t like being social for long periods of the time. They are likely to step in and enjoy the party for a while, but will slip out when they become drained by others. ISTPs simply need a lot of time to themselves or else they become drained and overwhelmed. They are capable of being social people, it just isn’t something they like doing for long periods of time.

ESTPs can be party animals especially since they enjoy living in the moment. They want to have a good time and aren’t afraid of taking a few risks in the process. ESTPs are also very outgoing people and they enjoy being able to entertain others. When they are immersed in a social situation they can certainly become the center of attention without much concern. ESTPs often go through a party animal phase in their lives, especially when they are younger.

ISFPs aren’t usually part animals since they can be a bit shy around new people. While they do enjoy having a good time it can take a while for them to become comfortable. For the ISFP it is more about who they are around, since some people can bring out their fun and outgoing side. They enjoy being around people who can bring out their party animal, and make them feel more at ease around new people. They can be social people, especially when the setting makes them feel safe being themselves.

ESFPs can definitely be party animals, especially when they are younger. They enjoy being the center of attention and are often good at fitting into this role. ESFPs simply want to have a good time and don’t like being held back by expectations. They live in the moment and sometimes that means soaking up the attention and being a bit of a party animal. ESFPs do what feels right in the moment and that sometimes means jumping into the party and being a little bit wild if they want to.