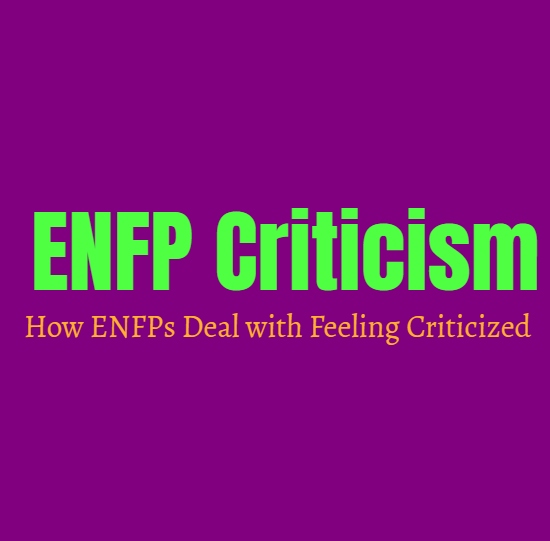 ENFPs can certainly be sensitive to certain types of criticism, often without meaning to. This is especially the case when they know someone is not being constructive and instead they are just poking at the ENFP to upset them. They might still struggle with the constructive type of criticism though, since ENFPs have a tendency to overthink things before they share it with others. Hearing someone else make comments about their work or accomplishments can be difficult, since the ENFP has likely already thought of those things beforehand. They have strong inner morals and strong sense of who they are, which can make them a bit stubborn when it comes to hearing what others have to say about something which they hold dear and personal.

ENFPs have rather strong inner beliefs, and so criticism can be taken harshly often times. This doesn’t mean the mature ENFP is incapable of handling constructive criticism, it just depends entirely on the situation and what that person is criticizing. Certain work accomplishments or things the ENFP knows they need help with are often fair game, but personal feelings and hobbies can be a bit different. They don’t like feeling as if people are constantly trying to change them or make them improve, when sometimes they just want to enjoy things for what they are. There are certainly scenarios where the ENFP can cope with and handle criticism, but the reality is that they don’t always want to receive it. They have their own way of viewing themselves and the world around them, and sometimes prefer to live inside of their imaginations. ENFPs rarely see things as so definitive as other people do, and this can make them less interested in criticism from others.

ENFPs often dislike criticism because they feel things very deeply and are already relatively hard on themselves internally. They have a tendency to analyze every detail of what they have accomplishments, especially if it is something creative they are wanting to share with others. The ENFP can see every little mistake or flaw in their own actions, and can be rather critical of themselves. This is not something most people can outwardly see about the ENFP, since they try to keep it to themselves and not show that they might be feeling nervous about their skills. They overthink things and scenarios, imagining how each thing could turn out or how people might perceive it. Often when someone criticizes them, it is something they have already thought about themselves beforehand. In some cases this is frustrating because the ENFP has considered the potential for this criticism, and decided that what they put forth is how they ultimately want to be perceived. If they have made the choice to move forward it means they want to share it with others, and might not be as receptive to their criticism, constructive or otherwise.

ENFPs also have rather strong inner beliefs and morals, and they believe in standing by them. When the ENFP has developed a deep connection to something, it becomes difficult to process criticism over this from others. This becomes part of them in a way which most people cannot understand or fully appreciate, and so the ENFP really doesn’t want to be knocked down by their doubts. When they are truly diving into something and want to immerse themselves in those feelings, they don’t want to feel like people are trying to pull them out of it. If the ENFP has developed a personal connection with a hobby or anything which sparks their soul, they can become somewhat defensive over this. When they receive criticism connected to this new found love, the ENFP can take this harshly and become defensive or even angry. Instead they would much rather have people give them the freedom to enjoy it without having to constantly criticize or have their own personal judgements on the matter. Their sense of independence can partly be what pulls them away from criticism and makes it feel unnecessary.

For the ENFP the best way to improve when it comes to processing criticism, is just allowing people to express themselves without trying to take this to heart. While it can be a challenge, ENFPs are good at recognizing when someone is simply sharing their thoughts and opinions with them. When they can learn to take this information and move on without needing to seek validation for themselves, it can become a bit easier on the ENFP. Criticism is rarely easy for them but the more confident they become in themselves and their beliefs, the easier it becomes to let go when someone is being critical in ways they don’t appreciate. It is still important to hear people out from time to time, especially if this comes from a place of sincerity and caring, rather than a person who is being judgmental. Taking the time to pay close attention and find out the difference, is something which is important for the ENFP to do.