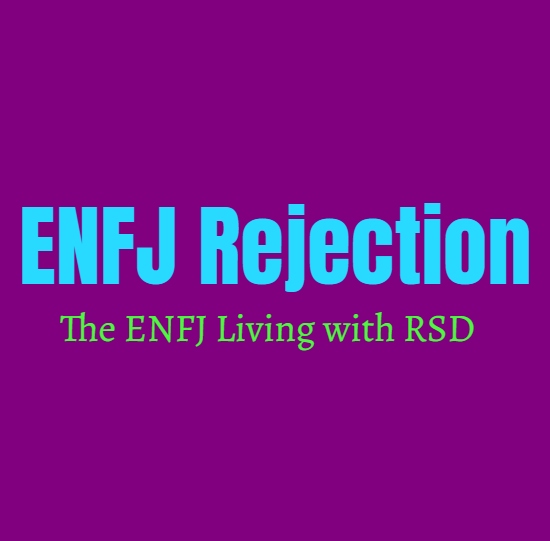 ENFJs definitely struggle with rejection and criticism, since they work hard to please everyone around them. They have a hard time feeling as if they have failed and can blame themselves if things don’t go perfectly. ENFJs put so much pressure on themselves to be everything to everyone around them, and so anything less can feel like some sort of failure. For the ENFJ this is why rejection can be so painful, and so suffering with RSD is something which is rather overwhelming for the ENFJ. Having that overwhelmed and painful response to perceived rejection and leave them feeling like they aren’t good enough in a way which makes it hard for them to cope or process this alone.

ENFJs don’t naturally deal well with rejection, since they work so hard to avoid this. They care about helping others and do everything they can to make their loved ones happy. ENFJs put so much focus on everyone else, that it can be hard when they feel a sense of rejection from these people. Being someone who is willing to go above and beyond to make others happy, can leave little room for the ENFJ to focus on themselves and their own needs. This is part of why criticism or rejection can be so draining and overwhelming for the ENFJ. Since they already expend a lot of energy and time on others, feeling like this is not appreciated can be really unbearable. ENFJs care about making their loved ones happy and can put a lot of pressure on themselves to be perfect. They don’t really manage criticism well, since this can feel like some sort of failure to them. If they haven’t achieved some level of perfection then the ENFJ can actually feel as if they aren’t good enough. It feels like they should have been able to do better, and they can fear the rejection they will feel from the people they love most because of this. ENFJs can struggle with any kind of rejection, but this becomes especially difficult when it is from someone they love and trust. They put so much into these people and into making them happy, and really just want to feel like this is being appreciated.

RSD is something that people with ADHD or ADD can suffer with, and can be a rather debilitating thing to deal with. For these people it becomes beyond painful when they experience a sense of rejection, and causes them to continuously obsess over it. They can perceive a rejection which hasn’t really occurred, feeling as if someone has slighted them when it was not their intention at all. They can feel like they have been criticized by people they love rather easily, and this is really too much for them to handle in those moments. It is something which comes on in random situations, which makes it hard to really seek out ways of moving forward or avoiding these situations. For the ENFJ rejection is already hard enough, but dealing with RSD is something which can feel a bit crippling. They are most likely to respond to this by kicking their perfectionist nature into overdrive, and want to be sure that each action is done precisely and without any kind of flaw. The ENFJ can become obsessed with ensuring that everything they do is perceived correctly, and will work on constructing a carefully put together image. This can feel like the best way to protect themselves from rejection, and the overwhelming feelings which they get from it. If they can construct an image which is perfect and doesn’t make them feel truly vulnerable, they might feel a bit stronger and like they can cope with those feelings. For the ENFJ RSD really is something which can make them feel hopeless, as ENFJs already struggle with rejection as it is. Even the smallest rejection or criticism can cause them to feel like breaking down, and for the ENFJ this can feel like weakness. They want to appear strong for the people they love, and don’t like seeming as if they cannot overcome things. It can be hard for the ENFJ to realize that RSD is not their fault, and is something they cannot just control by trying to push it away.

For the ENFJ dealing with rejection is always a bit of a struggle, since they pour their heart and soul into the people they love and into making them happy. It is important for them to learn to process their own feelings and actually consider themselves a priority sometimes. ENFJs can spend so much time caring for others which causes them to forget about their own needs. For the ENFJ to really learn how to overcome rejection, they need to put more focus on themselves and becoming confident in who they are without other people around.