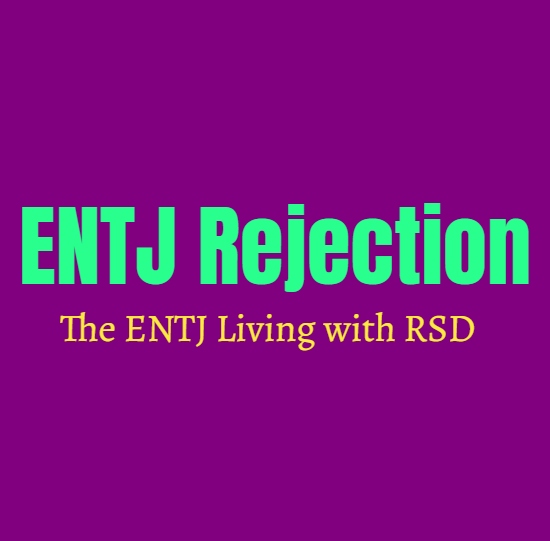 ENTJs can be rather confident and strong-willed people, but that doesn’t mean they are immune to the effects of rejection. They can still become rather hurt when someone they care about makes them feel rejected or overly criticized. For the ENTJ it is often easy to push these feelings aside with strangers, but when it comes to loved ones they might struggle. This is because they don’t trust easily or let people in, and once they do this person means a lot to them. When it comes to the ENTJ dealing with RSD this can definitely be a struggle for them, since they are used to being in control with their lives. They don’t like feeling as if anything is preventing them from doing what they want or need to do, and want to find ways to overcome any struggle or hurdle.

ENTJs don’t really appreciate dealing with rejection, but in many cases they take this as a challenge. Instead of simply accepting that rejection they find ways to improve and overcome it so that it doesn’t happen again. They don’t allow the rejection to let them feel overwhelmed or broken down, instead they want to do whatever they can to fix it. ENTJs believe in pushing themselves and constantly taking on challenges in order to become the best they can be at whatever they do. For the ENTJ it is important not to allow emotions to cloud their judgment or prevent them from becoming who they want to be. This is why certain rejection is something they take as a challenge and an opportunity to grow. When they feel rejected by their loved ones however, this can become a different situation. ENTJs don’t let people in easily and take some time before they truly consider someone part of their circle. When they care about someone deeply in this way, they can actually have a hard time processing rejection or criticism from them. ENTJs want to feel like the people they love are on their side, and not pushing them away or rejected them for who they are. While they can deal with constructive criticism from these people, it has to be expressed in a logical way. For the ENTJ it truly depends on the situations and the person they feel rejected by, since they have a hard time processing this from someone they trust and care for.

RSD is something that people with ADHD or ADD can suffer with, and can be a rather debilitating thing to deal with. For these people it becomes beyond painful when they experience a sense of rejection, and causes them to continuously obsess over it. They can perceive a rejection which hasn’t really occurred, feeling as if someone has slighted them when it was not their intention at all. They can feel like they have been criticised by people they love rather easily, and this is really too much for them to handle in those moments. It is something which comes on in random situations, which makes it hard to really seek out ways of moving forward or avoiding these situations. ENTJs dealing with RSD can really struggle to process those emotions, as they prefer to focus on facts and logic. Not being able to really filter these feelings and focus on what is practical and logical, can be truly draining for the ENTJ. They might blame themselves, struggling to understand why they feel overwhelmed by these emotions and don’t process rejection in the way they would want to. For the ENTJ not feeling in control is one of the hardest parts of living with RSD. They don’t like feeling as if they are not able to maintain a sense of control in their own lives, and can struggle to deal with this in healthy ways. They might continue to construct this perfect image, hoping to avoid any rejection by maintaining a sense of efficiency in perfection at all times. They also aren’t as likely to show people weaknesses or express things which would hurt to feel rejected over. This can make the ENTJ extremely guarded and appear as if they are cold to most people they encounter.

For the ENTJ dealing with rejection the best thing is to simply communicate openly with the people they love. Most ENTJs won’t struggle with rejection from strangers, and so the important thing is to be open with the people who they do feel hurt by. Talking more openly to their loved ones about why this rejection hurts them, can help clear the air and they can move forward from the negative feelings. ENTJs do want to be able to share things with the people they love, they just might struggle with feeling vulnerable even with them. Opening up and being sincere about why it bothered them, can help their loved ones to understand them better and try to avoid rejecting them in this way again.