Here’s How You Handle Confrontation, Based on Your Personality Type 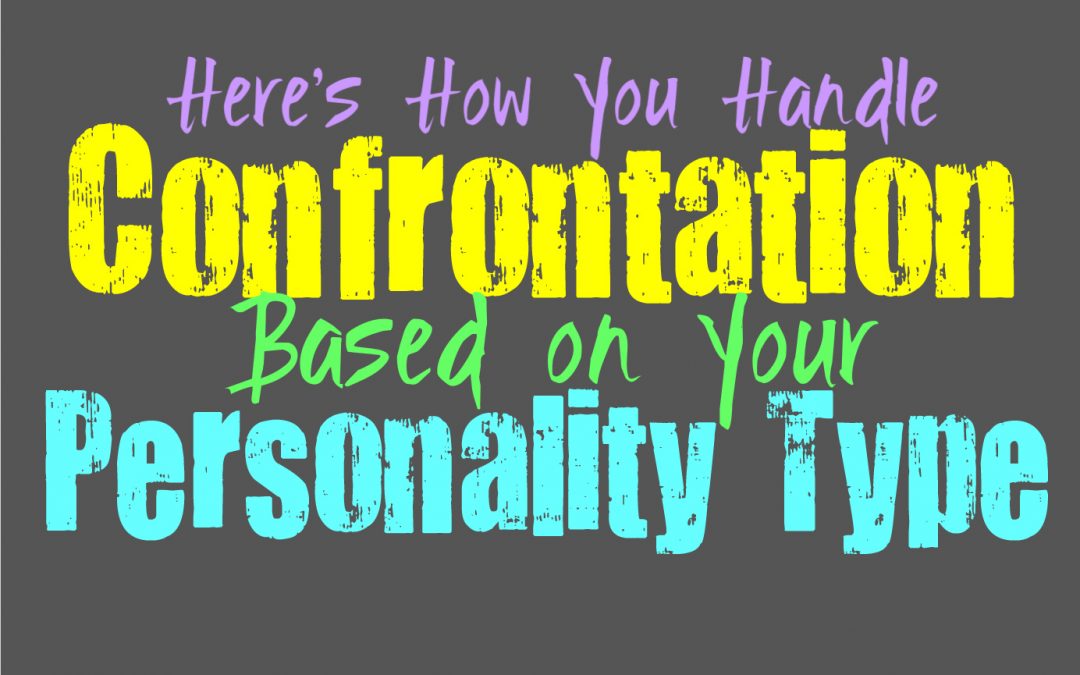 Here’s How You Handle Confrontation, Based on Your Personality Type

Some people find confrontation to be rather easy to handle, while others struggle with it. Here is how you respond to confrontation, based on your personality type.

INFJs really aren’t fans of confrontation, especially when it feels unnecessary. They don’t like having to confront people about negative things, especially when it comes to certain loved ones. INFJs just want things to be kept peaceful when they can, but they do have boundaries. When the INFJ feels just in confronting someone, they won’t be afraid to take that step. This often happens without them putting much more thought into, especially once they have reached this point. It becomes even more intense when the INFJ is confronting someone about one of their loved ones. In most cases though INFJs aren’t fans of confrontation and will try not to let things get this far.

ENFJs do tend to avoid confrontation when they can, but they aren’t afraid of it. They simply want to make sure their loved ones are happy and dislike disrupting this in any way. If the ENFJ has to confront someone, or handle being confronted, they can certainly hold their own. They are strong-willed people who don’t allow others to disrespect them. The only times ENFJs struggle with confrontation is when it is coming from someone they love deeply. This makes it challenging for them to handle the discord, and they often want to smooth things over however they can.

INFPs really don’t enjoy confrontation, and prefer to avoid it when they can. For the INFP it often seems pointless to turn things into disagreements, and they would much rather be around people who can handle being different than others. INFPs can become sensitive to aggressive individuals, which is often why they want to stay away from too much confrontation. If the INFP does feel truly bothered by someone’s behavior, they will take the initiative and confront them. They often feel the need to do this when that person is bullying others or being unfair without completely recognizing it.

ENFPs definitely dislike confrontation, especially when it comes to their loved ones. They can often handle a bit of discord with someone they don’t know well or don’t care for. ENFPs aren’t afraid of confrontation, they simply don’t enjoy encountering it. They want to enjoy the presence of their loved ones and can become anxious when things become tense between them. Instead of getting into an argument the ENFP can often turn things into a playful joke instead. They simply don’t want to cause problems in their relationships, and because of this they might avoid confrontation.

INTJs don’t mind a little confrontation, especially if it is necessary. They can handle confronting someone when they need to, especially if that person is being unreasonable. INTJs present facts when they are dealing with any type of confrontation, and dislike bringing emotions into the situation. Where INTJs become frustrated is when they dealing with an emotional based confrontation, where it seems nothing can really be resolved. They often feel exhausted by this, and try to avoid it as often as they possibly can. INTJs also aren’t fans of physical confrontations, since they prefer to handle most things with their minds.

INTPs don’t enjoy confrontation when it seems completely pointless or when it’s based on emotions. They can certainly handle confrontation when someone disagrees with them, since the INTP will approach this situation with plenty of facts and evidence. INTPs are not afraid of confrontation by any means, but they don’t always feel like dealing with it. They don’t have much patience for people who simply want to cause drama, and can certainly become annoyed when they are sucked into these types of disagreements.

ENTPs aren’t afraid of confrontations, and might even enjoy them from time to time. They like to shake things up a bit, and confrontations can often turn into debates. If they see that someone might be capable of being civil and open to their side, then the ENTP won’t hesitate to enter into a bit of a disagreement. They enjoy being able to present the facts that they know, and possibly learn a bit from someone else. ENTPs can however become uneasy with emotional confrontations, and will attempt to lighten the mood by using humor or playfulness.

ISTJs aren’t fans of confrontation but they certainly aren’t afraid of it. When it seems like something has to be dealt with then the ISTJ will not hesitate to do so. They will confront people who aren’t behaving appropriately, or who are overstepping the ISTJs boundaries. They don’t accept disrespect from others, especially since they make their boundaries perfectly clear. The ISTJ will be more than capable of standing up for themselves when the time comes, and they won’t hide from confrontation.

ESTJs are definitely not afraid of confrontation, and can handle it rather well. They are usually the first one to address the situation, and will confront the other individual/s who they are having trouble with. ESTJs stand up for themselves and often set very clear boundaries for what they will accept. The ESTJ doesn’t just allow things to slide by, especially if someone is disrespecting them. ESTJs also accept confrontation when they see that someone is not being efficient or handling their work properly.

ISFJs definitely dislike confrontation of any kind, and often try to avoid it. They will attempt to smooth things over when someone is upset or looking for some sort of fight. ISFJs work hard to create a sense of harmony in their environment, and can become very defensive when someone disrupts this. ISFJs want to avoid confrontation where they can, and will definitely attempt to make the problem go away without having to fight over it.

ESFJs truly dislike confrontation and often try to avoid it when they can. They especially dislike having to deal with confrontational situations between themselves and their loved ones. The ESFJ often tries to smooth things over any way they can, and works to create a sense of harmony in their environment. Confrontation disrupts the balance and peace around them, and the ESFJ has often worked hard to maintain this. They try to avoid confrontation where they can, but they will stand up for their loved ones when it comes from an outsider.

ISTPs aren’t afraid of confrontation, but they often avoid it when it comes from an emotional place. If someone is upset with them and isn’t approaching it with logic, the ISTP might try to avoid it entirely. They simply don’t handle feelings all that well, and often try to avoid them or smooth things over with their charm. ISTPs aren’t afraid of confrontation when it comes from a place of logic though, and will try to find a way to solve the problem at hand.

ESTPs can definitely be confrontational people, especially if someone is getting on their nerves. They aren’t afraid of speaking their mind, and will present with evidence and facts when they need to. ESTPs simply don’t like having people get in their way, and can become annoyed with those who can’t seem to get things right. At the same time ESTPs dislike confrontation with their loved ones, and will try hard to keep the peace. They often use their charming nature to avoid arguments where they can, instead of having to dive deep into emotions.

ISFPs often try to avoid confrontation when they can, and dislike having to deal with it at all. They want to enjoy being with the people they love, and are happiest when those people accept them unconditionally. ISFPs don’t want to deal with constant confrontation, and will try to find ways to avoid allowing it to affect their lives. For the ISFP it is more valuable to focus on the positive things around them, and enjoy soaking up the present moment without setbacks.

ESFPs definitely don’t enjoy confrontation, and will try to avoid it whenever they can. If something isn’t going their way the ESFP will often use their charm and fun-loving personalities to adjust the situation. They don’t enjoy confrontation since it often comes from such a negative place and ESFPs prefer to focus on positivity. They want to live their lives with a sense of fun and passion, without having constant disagreements getting in their way.