INFJ ADHD & ADD: What the INFJs Attention Span is Like 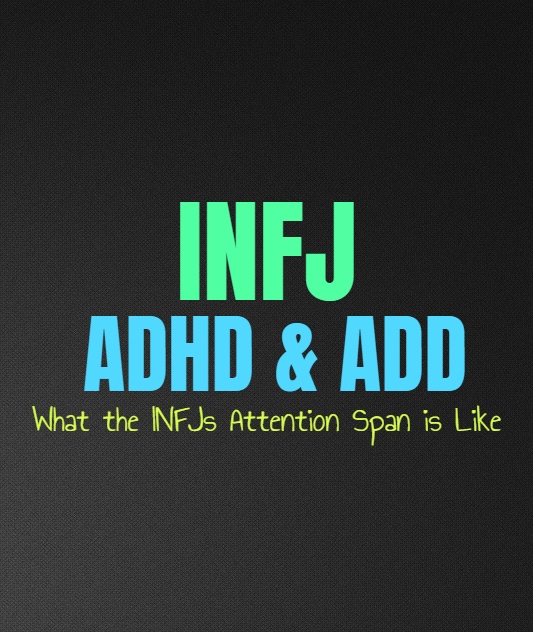 INFJ ADHD & ADD: What the INFJs Attention Span is Like

The struggle with personality types and correlating them to things like ADD or ADHD, is the fact that sometimes it is simply part of their personality. Which types are more likely to have these disorders really isn’t something that can easily be measured, and so it is important to take a step back and analyze accordingly. Diving into the traits and differences can help to understand what might cause these types to be misdiagnosed, or what might make them potentially more prone to certain conditions. It is important to understand each individual on a deeper level before making assumptions, since there is far more complex details than simply pegging a personality type as something without learning more.

While INFJs do lack inspiration in certain subjects, they rarely struggle with being able to focus. As children though INFJs do have a tendency to daydream which can sometimes be misunderstood. They can spend so much time alone and this isn’t always something which others relate to or fully comprehend. While they might have this tendency to spend time inside of their own minds, they often do well in school and can get their work done accordingly. They don’t struggle to focus on getting things done when the time really comes to do so. It is important to understand the INFJ better and on a deeper level before making assumptions.

INFJs are often calmer and more reserved, even as children. They keep to themselves and do their best to avoid too much trouble. They have a lot going on inside of their minds, and have vivid imaginations which can keep them distracted sometimes. While INFJs would often prefer to daydream and spend hours inside of their thoughts, they are also very aware of the emotions and behaviors of those around them. The INFJ can tell when they are being observed and often knows when they need to remain focused to avoid being misunderstood. Most INFJs pick this up at a young age, and do their best to remain focused on their work and the things they need to do when they have to. They are also naturally intelligent people, and can often excel in schooling and intellectual work without much effort. They can keep up in school most of the time without having to really focus 100%. This can help the INFJ to avoid being seen as someone who has ADHD or ADD when they actually don’t.

While INFJs are dreamers, they are also good at focusing on one task when they have to. They might be somewhere else inside of their minds, but it appears as if they are intently focused on what they are doing. INFJs often enjoy things like this because it gives them a chance to let their minds wander, while they are dealing with whatever is in front of them at the time. INFJs know how to multitask in this way, so that they can give themselves the space from interacting with others. While INFJs are often warm people who like connecting with others, but that doesn’t mean they want to do this constantly. Being that they are introverts they need time to themselves, but when they are young the INFJ might realize that they need to hide this from most people. They battle with their desire to please others and their need to have plenty of time to themselves. These struggles can make it challenging for the INFJ when they are younger, as they try to figure out their own needs and boundaries. They can often portray themselves however they want others to see them, since INFJs are in tune with the emotions and expectations of others. While they are capable of this, it can become rather draining and overwhelming after only a short time of doing it. It is important for the INFJ to learn how to be themselves as they develop, even if people misunderstand this.

The INFJ who truly does deal with ADHD symptoms, can be even more misunderstood. The struggle is that INFJs are rare as it is, but being an INFJ who has ADHD is even more uncommon. This puts them in the position of being highly misunderstood, and having people label them as things which are incorrect. INFJs with ADHD can be seen as extroverts (even though they are not), because of their occasionally outward expressions and the way they appear more on edge and even energized. Sometimes their hyperactivity can express itself as OCD, since the INFJ can become obsessive over one thing and find themselves latched onto this. While this is a common INFJ quality, it becomes amplified when they are dealing with ADHD. They become unable to focus on others things and want to continue to analyze this one subject or situation. Their attention span is a bit of a struggle, as they find themselves unable to sit still or focus on something even when they want to. This can be more challenging for the INFJ than for others types, especially since their inner need to please is important to them. For the INFJ dealing with these ADHD symptoms, it can be a constant struggle of feeling misunderstood by those around them. It is important for them to find people who are similar to them, and who won’t judge their behaviors and see them inaccurately.

While being misunderstood is a common theme for the INFJ, that doesn’t mean they shouldn’t search for people who are willing to put forth the effort to connect with them and actually understand them on a more personal level. ADHD might not be common for INFJs, but like anything it is not impossible. It is important to analyze the situation and learn more about the INFJ on a personal level in order to really know what is going on inside of their complex minds and souls.