How Each Myers-Briggs Type Handles Criticism 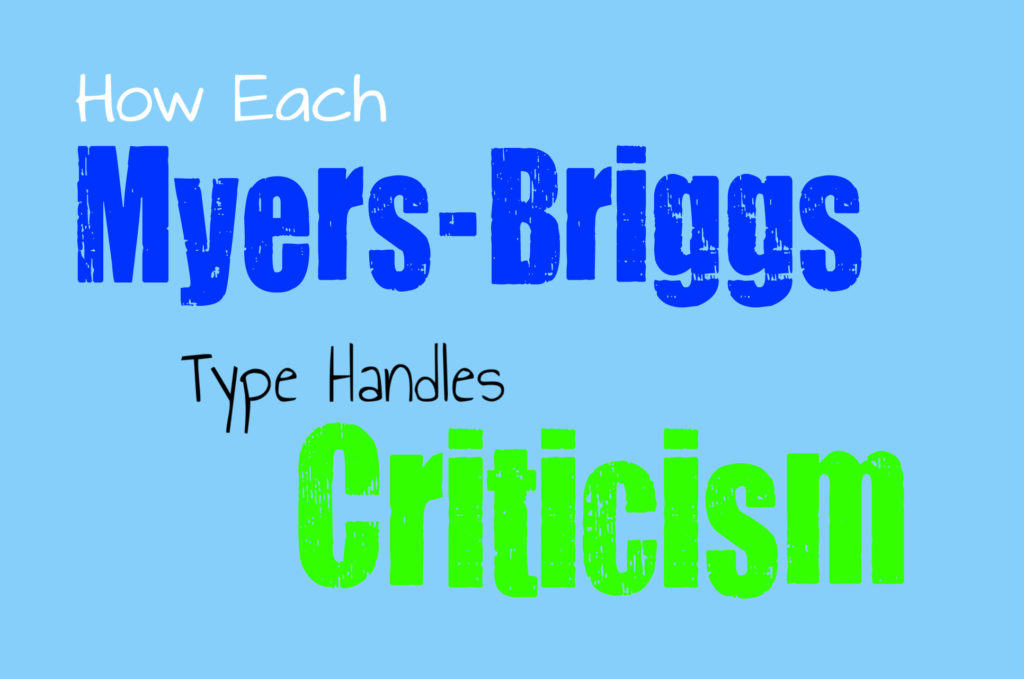 How Each Myers-Briggs Type Handles Criticism

Criticism can be hard to swallow for anyone, but some people take it harsher than others. It can certainly be difficult to process negative comments about yourself and because of this some Myers-Briggs types are extremely sensitive to criticism.

INFJs are very warm, but also intelligent individuals. They are strong-willed people, who stand by what they believe in. When it comes to being criticized, the INFJ will respond differently depending on who is dishing out the remarks. If someone they do not know finds the need to criticize the INFJ, they will often scoff at this. They will certainly not be bothered by someone they do not care for, having an opinion about them or their choices. If the comments are constructive though, the INFJ might take them into consideration without being upset by it. When it comes to their loved ones, INFJs are much more sensitive. They will not intend to be, but they are easily hurt by those lucky few people who they allow into their lives. INFJs are picky about the people they trust, this is simply because they love very deeply. Someone close to the INFJ, can often hurt them without even meaning to. The INFJ will respond much better by words of encouragement, and might find criticism to be too much to handle.

ENFJs are hardworking people, who strive to provide for those around them. They do not respond well to criticism, but actually react much better to positive reinforcement. ENFJs are not weak people by any means, but they work very hard for their loved ones. If the people they care about are constantly criticizing them, ENFJs will become extremely overwhelmed and upset by this. They need to feel like their efforts are being recognized, and because of this they require positive feedback. The negative words of the people they love, can truly affect ENFJs in a negative way. They can often take criticism from their boss, or people they do not feel close to. They don’t mind hearing feedback from these people, since they expect to hear it from them.

INFPs are rather sensitive individuals, and because of this they truly dislike criticism. In most cases, they are their own worst critic- so they really do not need to hear it from their loved ones. INFPs try to be aware of their own actions, especially when it comes to the things that matter. They strive to be good people, and when they hear criticism against themselves, it can be difficult for them to swallow. INFPs might take these comments into consideration if they feel they are warranted, but it will still bother them very much. They often do not care what strangers think of them, and will be able to ignore those remarks. When it comes to the people that they trust though- INFPs are very sensitive to their words. They try to be sensitive to the feelings of others, and because of this they become bothered when people do not consider their feelings.

ENFPs aren’t really fans of criticism, especially from the people they love. They are often very strong people, but regardless- they dislike feeling criticized. They know who they are, and they are conscious of their efforts to be a good person. Since the ENFP realizes that they are likely good, they might find any negative criticism to be pointless. They might even feel like changing those qualities is unlikely to happen- so why would they want to focus on the bad? ENFPs are positive individuals, with a true zest for life. When it comes to hearing disapproval from others- it can be truly upsetting for them. They might even disregard the criticism entirely, in an effort to bury those negative feelings.

INTJs are actually one of the types most likely to handle criticism well. If the INTJ feels like someone is delivering the criticism in a constructive and logical manner, they will certainly appreciate it and listen. INTJs enjoy growing and progressing, and are constantly looking for ways to improve themselves. If someone they trust is willing to point them in the right direction, the INTJ will definitely take the time to listen. They are not likely to become hurt by the comments, especially if they are delivered in an intelligent way. INTJs might become frustrated if they feel like the criticism is not delivered with a helpful intent. They will appreciate criticism even more, if they person also gives them helpful ways to improve.

ENTJs are very driven individuals, and are often aggressive when it comes to accomplishing their goals. They will often take criticism from their boss, as a challenge to improve. They enjoy being challenged, and truly thrive when they can prove someone else wrong. ENTJs are not afraid of criticism, and might even enjoy the opportunity to improve. If they believe someone is giving them helpful tips to grow and become better, the ENTJ will certainly take those comments into consideration. But if someone is being rude and trying to tear them down, the ENTJ will not be afraid to challenge that person with logic.

INTPs are often very hard on themselves, and because of this they might dislike criticism. They are their own worst critic, and have likely already considered all of the possible angles. If something is not going right, there is a large chance that the INTP already sees what they are doing wrong. If someone they care about approaches them with negative comments, it will likely upset the INTP, but they will brush it off like nothing happened. INTPs need to be approached in a logical and understanding way, especially if someone is trying to deliver helpful criticism. They also prefer if these comments come with helpful and pragmatic ways to improve their errors.

ENTPs might be unusually sensitive to their loved ones comments, but they will probably respond with a joke or witty remark. They do not want to seem like they are upset by criticism, and because of this they will likely internalize these comments. When it comes to people they do not care deeply for, the ENTP is often fine with criticism. If the comments are constructive, they might even see it as an opening for a healthy debate. ENTPs love to play the devil’s advocate, and will often argue on the side of a point they don’t even agree with. They do this because it can often bring them to exciting new conclusions and realizations.

ISTJs are often great at handling criticism, as long as it is constructive. If their boss lets them know that something can be done better, the ISTJ will rise to the occasion. They are constantly pushing themselves to improve, and want to be seen as the hardworking people that they are. ISTJs might find themselves upset if their loved ones criticize them though, especially if it is not delivered in a way that seems helpful. The best way to critique the ISTJ, is to also provide them with pragmatic solutions in order to improve.

ESTJs strive to be accomplished and because of this, they work hard to avoid criticism. The ESTJ will push themselves to be the best they can at whatever they are doing. To the ESTJ, if they are being criticized, it means they didn’t do it right the first time. This will often frustrate them, but the ESTJ will push forward and work to improve themselves. ESTJs will take criticism much better from strangers, or from their bosses- than they will from their loved ones. They work hard to provide for their family, and simply want to feel encouraged and appreciated by them.

ISFJs are loving and giving people, constantly striving to provide for their loved ones needs. ISFJs are often bothered by criticism, even if they do not want to admit it. They will likely bury their feelings, and attempt to feel okay with the negative comments. If they receive this criticism at work, the ISFJ will attempt to fix the problem as best they can. If they feel put down by their loved ones though, the ISFJ might find themselves struggling to find a solution.

ESFJs often dislike criticism, especially if it is coming from their loves ones. They rarely care if someone they do not know or trust critiques them, and will often laugh those comments off. They are likely to completely neglect criticism delivered by strangers, even if it is delivered in an attempt to be helpful. They do however, care very deeply about the comments that come from those closest to them. ESFJs might struggle deeply with any negative comments from loved ones, and will become deeply hurt by their criticism. The ESFJ will often take the criticism as a serious failure, making It hard for them to respond.

ISTPs often do not mind criticism, since they are not the most emotionally sensitive people. They are often comfortable with themselves and who they are- which makes it easy for them to receive criticism. They will take the time to consider the comments, and decide whether or not they are warranted. If the person delivering the critique is being logical and precise, the ISTP will certainly take it into consideration. They are logical individuals, and enjoy thinking things through, as well as finding solutions to their problems.

ESTPs often dislike criticism from their loved ones, and might even struggle to handle it. They work very hard to impress the people they care about, because of this any negative comments can truly affect them. ESTPs can handle the critique in a work environment and might even see it as a challenge to improve and do better. When it comes to their loved ones though, ESTPs dislike feeling like they aren’t living up to their expectations.

ISFPs enjoy being by themselves most of the time, but on occasion they enjoy being around the people who are very special to them. Their sensitive souls make them rather averse to criticism, and they might be very hurt by it at first. Over time though, the ISFP can become truly concerned about the comments their loved ones make to them. They can be rather hard on themselves to begin with, and negative comments can easily bring them down. They need people to express their critiques in a loving and warm way, in order for the ISFP to feel comfortable with it.

ESFPs are fun-loving people, who enjoy focusing on the positive. This desire to remain happy and entertaining, might make the ESFP averse to criticism. They simply want to enjoy life, and soak in all of the good things around them. The ESFP might feel like any criticism is simply a way to bring people down and make them feel bad about themselves. Because of this feeling, ESFPs won’t want to hear negative comments from their loved ones, or the people around them.