Something That Each Myers-Briggs Type Struggles With

Something That Each Myers-Briggs Type Struggles With 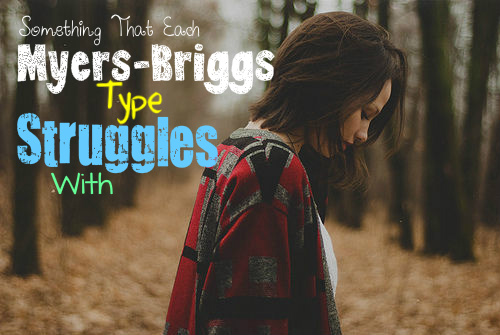 Everyone has something that they are just naturally bad at. Even the most skilled individuals face certain struggle and set-backs with their abilities. Here is something that each personality type is most likely to struggle.

INFJs are often very intelligent and intuitive and because of this they often find themselves getting lost in their own inner world. They have a strong sense of others emotions, and can very easily navigate most situations. They have a sense of intuition which helps them predict possible future outcomes very well. The fact is that many INFJs have a weakness when it comes to the physical world. They often do not have a strong sense of their physical surroundings, and aren’t the most agile or coordinated individuals. This is mostly because they are inside their minds too much to be bothered with their physical surroundings. They may not be the most active in sports and don’t really enjoy things that pull them down to the physical world.

ENFJ- Letting Others Care for Them

ENFJs are often very headstrong and dislike feeling incapable. They want to be able to provide for their loved ones and they work hard to do so. They strive to be excellent at everything no matter how hard the challenges they face are. They often succeed at juggling many things and once, along with caring for their loved ones needs. Because of this the ENFJ often struggle with allowing others to care for them. They don’t want to be a burden and if they need tending to, it often makes them feel like one. ENFJs will often avoid allowing others to even know that they need their care.

INFPs have a hard time with meaningless small talk. They enjoy being around people, but only if the connections are deep and inspiring. They don’t want to discuss something with a shallow nature, and will quickly become exhausted with such topics. The INFP wants to discuss something real and meaningful, like your deepest hopes and dreams. They don’t mind discussing topics that are sad or upsetting, as long as it isn’t shallow. Because of this the INFP often dislike social gatherings where they are forced to listen to others ramble on about pointless things. They would much rather stay at home alone with a good book, or a friend that they truly connect with.

ENFPs enjoy exploring new possibilities and allowing their minds to wander. They have an excitable and passionate nature, and that often causes them trouble when it comes time to remain focused. They become bored if they are forced to stay stuck on one topic, and will often lose track of what they were doing. They want to be free to explore new and inspiring things in the world. Who has time to sit still and work when there are so many new wonders to learn about?

INTJ- Talking to People They Dislike

INTJs are often very intelligent and intuitive individuals. They have a powerful focus towards their goals and are very good at willing them into being. Because of their drive and intelligence, INTJs often struggle with putting on a face for people they dislike. If they feel like someone is senseless or obnoxious, they really don’t have patience to deal with it. They often will avoid being around people that they dislike and avoid any kind of draining small talk with them. They can be somewhat impatient with people who are foolish or flighty.

ENTJ- Consoling Someone When They Are Sad

ENTJs are very passionate and driven individuals. They are outgoing and enjoy being in social situations. They often know how to navigate in the social world, and are good at making people like them. They do however, struggle with other people’s emotions. If someone is upset or emotional, the ENTJ may not know how to console them. They aren’t exactly comfortable with emotional people or their expression of hurt or sadness. Although they are skilled in many things, dealing with others feelings is not one of those skills.

INTPs are often very intelligent individuals, who enjoy spending time exploring new possibilities. They thrive on knowledge, but are often very caring towards others. Even though they feel strong compassion, they have a very hard time expressing these emotions. They do not outwardly express emotions easily, and prefer to keep them to themselves. They may appear critical of others because they enjoy being precise and often fail to give compliments or words of affirmation. Just because this is not a natural skill of theirs, doesn’t mean they do not make efforts towards it. Sometimes their attempts at compliments can come across as awkward, and hard to decipher.

ENTPs enjoy exploring new possibilities and being free to do so. They are often very intelligent and intuitive, and enjoy absorbing as much knowledge as possible. A possible failing of ENTPs is that they often dislike following rules or preconceived traditions. They often feel like rules are meant to be bent, or else they won’t be able to discover potentially better options. They dislike being told that they cannot accomplish something, and that often makes them want to fight to do it even more. They enjoy their freedom and authority figures often stand in the way of that. This makes the ENTP struggle with following strict rules or guidelines.

ISTJ- Going with the Flow

ISTJs are often extremely organized and enjoy planning things ahead of time. They are very good at making things happen and taking care of other people’s needs. They often struggle with letting go of life’s issues and just going with the flow. They feel uneasy if things are not planned, and struggle with relaxing. They often fear things will go very wrong if they do not make sure every angle is covered. ISTJs can have a hard time being spontaneous and experiencing new things.

ESTJs have a natural ability to take charge of any situation. They want to make sure things are getting done efficiently and often do not have patience for others incompetence. They usually believe that they are the one who can get the job done the best way possible. Because of their natural leadership skills, ESTJs struggle with allowing others to take control. The loss of control might stress the ESTJ out, and they will want to overpower the other person.

ISFJs are very caring and capable individuals. Although they are often good at many things, they can struggle with being the center of attention. If they are left to figure things out on their own, they can often solve the problem without much struggle. Once the ISFJ is forced to perform these physical tasks while other people are watching them, they will probably have a hard time. An example of this is playing team sports, since many people are watching them attempt this.

ESFJ- Taking Care of Themselves

ESFJs often spend their energy caring for their loved ones. They strive to make the people around them as happy as they possibly can. Because they are so focused on caring for others, ESFJs might fail to tend to their own needs. They struggle with dealing with problems of their own that might begin to build up. They might even forget to eat or care for their own health because they are so busy tending to others. The problem is that as they allow their own problems to pile up, the ESFJ may become too overwhelmed to care for their loved ones. So it is important that they have people around them to remind them of this.

ISTPs are often very laid-back and spontaneous individuals. They enjoy having their space and freedom, and can make for very fun friends. One thing the ISTP might struggle with, is their ability to be sensitive towards others. They are not entirely in touch with other people’s emotions, which occasionally makes them say insensitive or hurtful things. They are rarely intending to offend people, and often do not mean these comments to be harmful at all.  This mostly happens because ISTPs aren’t easily offended, so they expect others won’t be offended either.

ESTP- Being Alone For Too Long

ESTPs enjoy being able to be spontaneous and have fun with others. They dislike staying stagnant for too long and become bored very quickly. They often dislike spending long periods of time alone and just want to go out and experience new and fun things. This makes them struggle with being alone or sitting still, even if it is necessary. This can be a draw back when it is time to get serious work done.

ISFPs dislike making too many long-term commitments, and aren’t the world’s best planners. They want to be able to make choices without being held down. They enjoy their space and freedom, and this often makes them unpredictable. They may change their minds at a very short notice, making it hard to stick them to a schedule. Their desire for self-expression makes them appear fickle and sometimes hard to understand.

ESFP- Discussing a Topic They Aren’t Excited By

ESFPs are fun-loving and enjoy being around other people. They are often very caring and capable of understanding others well. Although they appreciate others, they often have a hard time discussing topics that they find uninteresting. If the topic is not something that they enjoy they will often try to divert the subject back to them and something they hold personally important.