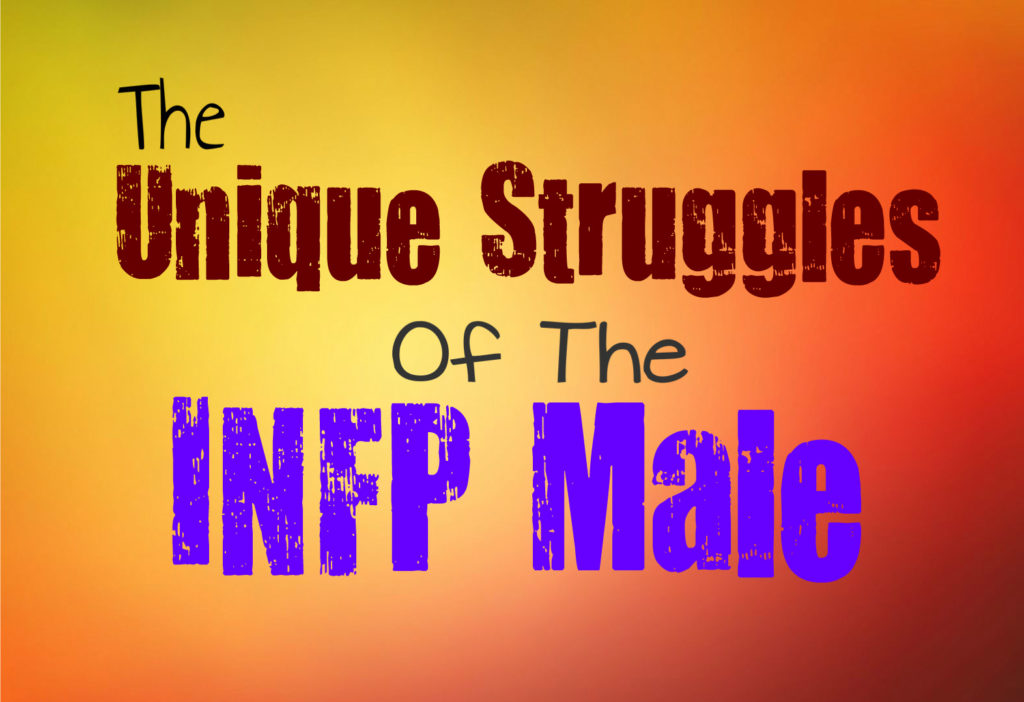 INFPs males are a rather unique and rare personality, one that has it’s own struggles. INFPs are kind and caring people, with rich inner minds and a dislike for anything shallow. Their natural sensitivity is a big part of what makes them so special, but is is also something that can make their lives rather difficult. Here are a few of the more unique struggles that the INFP male often endures.

INFPs are naturally very compassionate individuals, constantly trying to understand others. They become sad when they see pain in the world around them. INFPs dislike seeing any person hurting, and especially hate injustices. When people are cruel, they become personally hurt by this. INFP makes are naturally warm and sensitive people, who care about the world around them. They are not cold or distant, and will often appear much more caring than other people. They are very open people, who cannot seem to avoid caring for others. If they see someone in pain, INFPs will often come to their aid as quickly as they can. They are warm individuals, who are extremely connected to those around them.

This innate desire to help and care for others emotionally, can sometimes be difficult for INFPs. This is especially challenging for INFP males, since they go against some of the typical stereotypes of men. They will often become very upset with bullying, and might even step in to defend someone. INFPs often walk their own path, and dislike being shoved into a box. This can often cause them trouble, especially at a younger age. Being an INFP male means connecting with others, and being compassionate even when people judge them for it. This can sometimes cause the INFP male to feel emasculated, causing other people to see them as a doormat. They certainly are not pushovers, they simply are caring and compassionate individuals. Their sensitivity to others is not weakness, but rather a strength. They have a natural ability to connect with others, and a deep sense of emotional understanding.

They Are In Touch With Their Emotions

INFPs are extremely aware of their own emotions, because they spend plenty of time trying to understand what they are feeling. The fact that they are such sensitive souls, makes them more aware of their own emotions. When they speak about how they feel, they are often very certain of themselves. Many people do not understand this, and it can cause others to look down on INFPs. This can be especially difficult for INFP males, since they do not fit into the stereotypical idea of the emotional stunted male. They understand their own emotions, and are completely sensitive to the emotions of others. The INFP may struggle to convince others of their feelings, and may not receive the respect that they deserve. They will often become frustrated when people doubt their emotions, and might have outbursts from time to time. They simply want people to trust that they understand their emotions, and dislike when others attempt to challenge this fact.

INFPs feel things very deeply, which can be a rather challenging trait for them. It is what makes them so wonderful, but it is also difficult for them at times. INFPs cannot hide from their emotions, and are often impacted by the bad things that happen in their world around them. An INFP can often see something on television, or hear about something bad happening- and this will cause them to feel upset for a long time after. They are not simply caught up in their own world, and will often be bothered by the sadness of others. This is a constant struggle for them, but it is also what makes them such warm and incredible individuals. They often struggle to find their place in the world, and will struggle to feel understand. This depth of emotions makes the INFP male extremely rare, and often misunderstood. They will struggle to feel masculine, since they are not aggressive or insincere people. They strive to be honest, and simply want people to accept them for who they are.

INFPs often dislike conflict, and will avoid getting into arguments with people. They dislike when people become overly aggressive, and simply prefer to keep the peace. They will always stand up for their beliefs, and will not back down when they think it is important. In most cases though, INFPs would prefer to get along with others. They are not overly angry people, even though they can sometimes be stubborn. This can sometimes be a struggle for INFP males, especially since the stereotype of men is to be aggressive and forward. INFPs would prefer to give people space, and often won’t push people in order to get what they want. Instead of forcefully taking what they want, INFPs prefer to find a more peaceful way to accomplish things. If they have to step on others to get somewhere, they would prefer to hold themselves back. INFPs sincerely want to find their place in the world, but they don’t believe that they have to hurt others in order to do this.

Their way of thinking and of connecting to the world around them is what makes INFPs such unique and incredible people. They are certainly a rare breed, especially the open and sensitive INFP male. Their ability to connect with their emotions is often what makes INFPs amazing artists and musicians. This talent for self-expression is truly something to be admired, not judged. It can be challenging to be different, but the INFP male who learns to accept themselves for who they are- is definitely a force to be reckoned with.

4 Insights Into an INFPs True Fire

Here’s Why INFPs Make the Most Amazing Best Friends