Here’s How Important Transparency is To You, Based on Your Personality Type 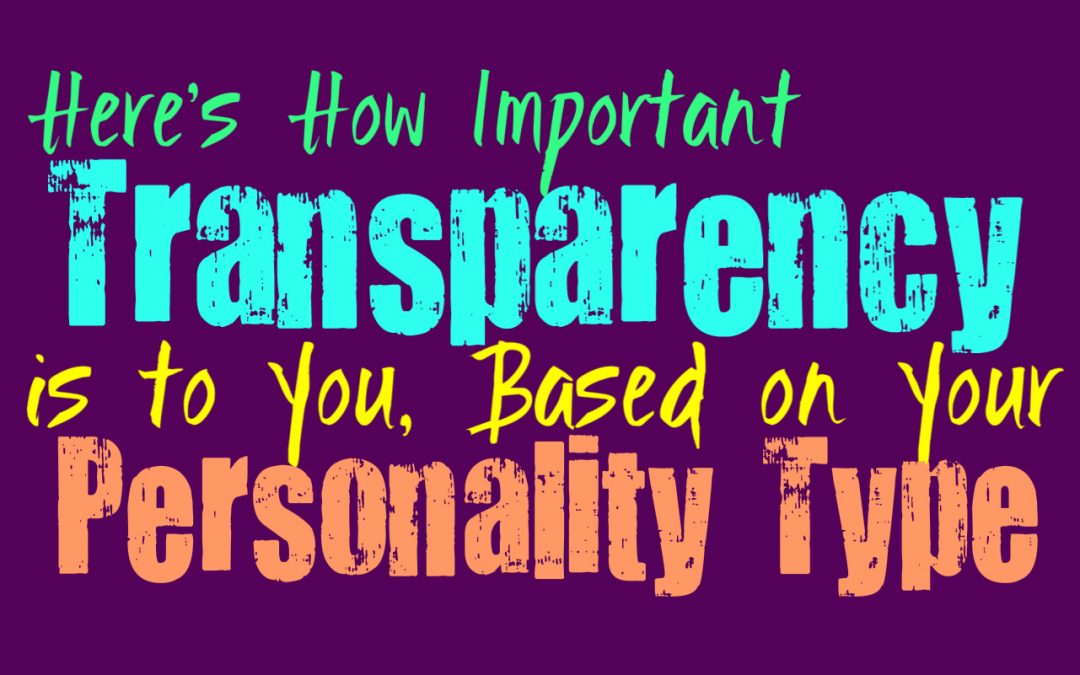 Here’s How Important Transparency is To You, Based on Your Personality Type

INFJs don’t feel like transparency is important in every situation, but they do value this in their closest relationships. They understand that not all friendships include completely open and clear communication, even though they still believe that honesty is important. While INFJs don’t require complete transparency in all of their relationships, they are often searching for it deep down. They want to find someone who they can feel completely themselves with, and will treasure this judgment free transparency when they finally do discover it.

ENFJs do believe in honesty but they can have a hard time with complete transparency. ENFJs like to have some things to themselves and can become uncomfortable having to open up completely. While they do value honesty and sincerity, the openness part can sometimes be a bit difficult. ENFJs do secretly desire the opportunity to find someone they can connect with and share a completely transparent relationship with, but it can be a bit frightening for them. ENFJs do hope to find someone who will not judge them and will accept their flaws with complete openness, even though they might struggle with the process.

INFPs absolutely value complete transparency with the people they trust and feel close to. They want to have an open connection where they can talk about anything without fear of judgement. INFPs don’t like keeping secrets, especially when they are in a romantic relationship. They want this love to be completely honest and transparent, and dislike feeling as if they cannot be completely themselves. So while INFPs realize that transparency might not be good with strangers, they do want this from their close relationships.

ENFPs do believe that being honest and open is important, but being 100% transparent can be a little bit much for them. They do strive to be honest and dislike keeping secrets or being untrustworthy. While ENFPs do believe in honesty, completely transparency seems a bit too much most of the time. They realize that strangers don’t necessary deserve to know every detail about who they are, and this often seems like something that could get them hurt. ENFPs do value when people are honest and open with them, and to an extent they are fairly transparent people.

INTJs do believe in being honest and sincere, but complete transparency is not often for them. This means being completely open and exposed in a way that doesn’t really make sense to the INTJ. They are also skeptical people who have a hard time trusting others, and being utterly transparent requires having complete trust. They are rarely comfortable enough with someone to expose themselves in this way, and will likely want to veer away from this level of transparency.

For the ENTJ too much transparency can simply be a way to get into trouble. They do believe in being sincere and honest people, since they do have a lot of personal integrity. While they believe in honesty, transparency means an entirely different level of openness which the ENTJ is likely not comfortable with. They are happy to be transparent with someone they have been in a committed and romantic relationship with for a long time, but with most other people it seems a bit foolish.

For the INTP transparency is not an easy thing to work towards, since they keep to themselves most of the time. Even when the INTP cares deeply for someone and wants to get closer to them, being transparent often seems a bit overwhelming. It is challenging for INTPs to open up to others most of the time and so being transparent is definitely a challenge. They don’t want to be fake or insincere, but being open with others is something that takes a lot of work for them.

ENTPs are open and real people, but people completely transparent isn’t natural for them. They strive to be honest and be themselves with others, especially with the ones they truly love. ENTPs simply struggle to express their emotions and their inner thoughts in a way that is completely transparent. While they believe in being sincere, exposing these inner feelings is just something that doesn’t come naturally for the ENTP. When they feel something that is a bit overwhelming they often struggle to really process it and expose it in a way that is transparent to others.

ISTJs do believe in being honest, but complete transparency is rarely their thing. They keep their emotions inside and can be somewhat private people. Their personal feelings and thoughts are often kept inside, and so they struggle to be transparent with others. ISTJs do strive for honest with their loved ones and truly close relationships, but might struggle to reach that level of transparency that some people might desire from them. ISTJs can seem a bit closed off at times, even though they are loyal and caring people.

ESTJs do value honesty but transparency can be a bit much for them. They try to be open with most things and don’t like feeling a need to hide from others. While they do want to be this way, ESTJs also have a rather private side to their personality. They can sometimes struggle to trust others completely and so this makes them fearful that people might have ill intentions. This can make it difficult for them to be transparent, since they don’t really trust that people will use this the right way.

ISFJs don’t like hiding things, but they are often very private people. They don’t like complete transparency since it can often feel like they are far too exposed. ISFJs often believe that certain things should be kept private and don’t exposed to everyone who will listen. They might not believe in completely transparency, but they do believe in honesty where their loved ones are concerned. ISFJs will be as honest as they can be, but that doesn’t mean they feel the need to openly share information that people don’t have a right to know.

ESFJs do believe in honesty, especially with their loved ones. They want to be completely open with the people in their lives and often have a hard time being dishonest. ESFJs can sometimes be nervous about the idea of complete transparency, since that being vulnerable in a way that can leave them feeling exposed. ESFJs can be perfectionists and often want others to see them in a positive light, which makes transparency a much less ideal notion.

ISTPs definitely don’t believe in complete transparency, especially since they are rather internal people. They sometimes have a hard time processing and understanding their own thoughts and feelings, so the last thing they want is to leave themselves entirely vulnerable. Even if the ISTP did want to be completely transparent, it would be challenging to express those inner emotions in a way that would make sense. Privacy is important for the ISTP, and they prefer to have some sort of space and independence from their relationships.

While ESTPs do believe in having completely honest relationships, transparency can feel like a bit too much. They don’t like having to expose all of their inner thoughts and feelings in such a completely naked way. ESTPs believe that some things are best kept to themselves, and they also believe that this should be the same with the people they love. They don’t need their loved ones to share every single thought of feeling and sometimes prefer that they keep certain details to themselves.

ISFPs often do value transparency, since they wear their heart on their sleeve most of the time. They actually struggle more with holding back and keeping parts of themselves hidden. ISFPs don’t like pretending or keeping parts of themselves hidden, and so transparency is often something they believe is important. While ISFPs can be somewhat quiet and internal sometimes, that is simply because they are introverts who require time to themselves to process things. When the ISFP is around their loved ones there nothing they enjoy more than being completely transparent.

ESFPs can definitely be transparent people, since they believe in being themselves no matter what. They often wear their heart on their sleeve, exposing their emotions in a way that is scary to most people. ESFPs don’t want to hide from others and they dislike doing things in a way that feels insincere. ESFPs definitely value transparency, since this is something that can come rather naturally for them. There may be times when they feel more like hiding things, but most of the time they do value transparency.