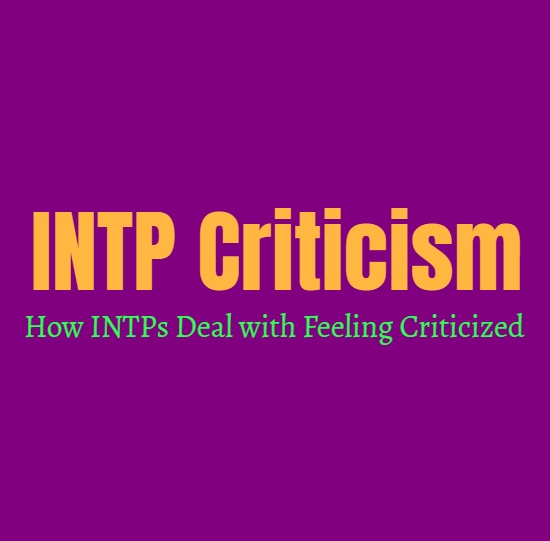 When it comes to criticism INTPs often want to be focused on what is logical and reasonable, but that isn’t always the case. While they do have a tendency to try and ignore their feelings in favor of what is logical, those emotions can sometimes find their way to the surface. INTPs will certainly look at things from a view of what could be helpful or useful to them, but it isn’t always an easy process. They prefer to focus on things which they can understand on a deeper level, rather than allowing emotions to cloud their judgment and behavior. The mature INTP is going to be much better at processing criticism, whereas a less developed individual is definitely going to struggle with handling this from certain people. It is also something which depends on the specific situation, rather than just how criticism affects the INTP as a whole.

If criticism is delivered with the desire to be helpful and informative, then INTPs can often handle this much better. They appreciate when someone is trying to help them to improve, especially if they are capable of expressing this in a factual manner. They really value being able to analyze a situation or information in order to improve and gain a better understanding. They care about absorbing information and learning as much as they can about the world around them, sometimes this means being willing to hear other sides of something. INTPs are often open-minded people, capable of approaching things from many different angles. This helps them when it comes to accepting certain types of criticism, especially when they realize that it is coming from an intelligent mind. If someone they respect gives them criticism and delivers it with useful tools to help them improve, the INTP will often take this seriously and value it immensely. They enjoy having someone around who can help them see different angles or perspectives, especially if it helps them to grow. They want to be capable of taking this criticism and improving themselves or the situation at hand, especially if they can readily see the potential in it. INTPs don’t simply become offended because someone gives them constructive criticism, especially the more mature INTP who can see where it is being delivered in a useful manner. They do prefer when someone can give them helpful solutions or ideas though, and will be rather receptive to this. Having someone give them criticism without some sort of solutions or means of getting to a solution, can actually be a bit frustrating. Where some people prefer to have emotional words of comfort, INTPs actually enjoy problem solving and having a means of getting to the results they want.

INTPs can become rather frustrated with people who attempt to criticize in a means which is not useful or helpful. When they can tell someone is simply trying to be harmful or set them back, they don’t have patience for this. They can actually find themselves wanting to challenge this type of person, especially if that criticism is presented in public in hopes of shaming the INTP. When this happens they are likely to seek out ways of bringing this person down a peg, and want to try and show them a taste of their own medicine. They might not do this frequently but INTPs can become annoyed with people who try to call them out instead of being helpful. They can sense when someone is being dishonest and when the intentions of this criticism is to be harmful towards them or their reputation in some way.

INTPs also become annoyed with criticism which is meaningless to them, or the person is commenting on things like social standing. They don’t appreciate someone attempting to criticize based on their own moral beliefs and standards, as this is something entirely subjective. It certainly won’t appear useful to the INTP, and they might feel the need to push that person away and avoid being around them entirely. Someone who wants to place their own values on the INTP leaves them feeling distant and often misunderstood.

Where INTPs might become sensitive to certain criticism, is simply in areas where they are already hard on themselves. They do try to be logical about things instead of allowing emotions to control their behaviors, but they can certainly have moments of weakness. When the INTP is feeling overwhelmed by a project and already insecure about what they have accomplished, they can find themselves being a bit passive aggressive towards any criticism they might receive. This isn’t something which they do intentionally but it does often mean they need some sort of break and time to reflect on why they are feeling this way. Ignoring their own emotions in favor of logic and reason is something which can actually cause them to process criticism poorly at times. The best way to improve upon this is by taking some time to understand their feelings and why they might be sensitive about certain subjects or accomplishments.