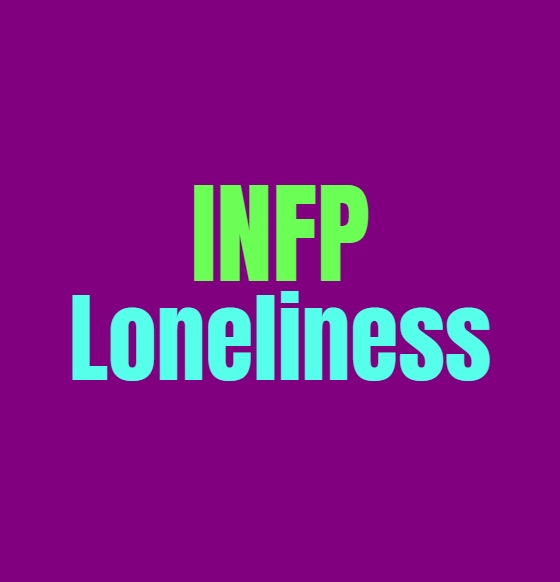 INFPs can be friendly and lovable people, but they often struggle with loneliness. INFPs feel alone sometimes even when they are surrounded by people, and this can be something they battle with and don’t fully understand themselves. They might even feel like something is wrong with them, especially when they don’t understand themselves or have tools like knowing their personality types. For the INFP it is important to feel connected with someone, and to feel like they have made a lasting bond which makes them feel understood and appreciated.

INFPs are a rare personality type, this alone makes them feel misunderstood. Feeling like no one really understands them or gets who they are, makes the INFP feel disconnected from others. They experience this loneliness even when they are around people who love them, because they still don’t feel like they are unconditionally appreciated and cared for. They might love these people, but they don’t really feel understood when they express themselves. This can cause the INFP to distance themselves even more, not feeling safe to share who they are and what they are feeling. For the INFP this makes their loneliness even more painful, as they start to alienate themselves out of fear. They don’t want to do this, but when they have felt rejected so many times they start to feel like it is their only option. Being so different and unique is sometimes a burden for the INFP, and if they don’t know why they are different it can be truly painful. They might blame themselves or feel like there is something wrong with them, which is not the case at all. This is something which overwhelms the INFPs thoughts when they are younger, which is why understanding themselves is so important for the INFP to grow and become confident.

They Need Space, But Want Love

INFPs really need space and time alone, but that doesn’t mean they want to feel distant from people. They want to be able to build connections which are meaningful even when they aren’t physically together. The INFP does not feel lonely simply because they are alone, this is something which stems from not feeling appreciated or understood. INFPs don’t need constant interaction to feel close to someone, they just need to feel a deeper connection than the surface. INFPs need a lot of time to themselves which can be something which alienates them from people who don’t understand this. For some people introverts aren’t something they fully comprehend and so they don’t know why the INFP wants to be alone. They might misunderstand this need and feel like the INFP just doesn’t want to be near them. This is something which can be a struggle throughout their lives, especially when the INFP is younger and doesn’t fully understand this need themselves. It is important for them to find people who appreciate their need for space and alone time, but also realize that the INFP still wants to feel close to others. Being someone who craves closeness and connection but also requires alone time, can be a something which is confusing for the INFP and those around them.

INFPs can sometimes find it difficult to connect with people and don’t just want to jump into friendships which don’t feel meaningful for them. This is a constant challenge for the INFP, especially when they feel like they need to find connections which make them feel passionate and excited. They don’t want to just make friends and jump into relationships which don’t hold a serious value, and so it isn’t easy for them to find people they feel sincerely close to. This doesn’t mean INFPs don’t like people easily, they just don’t feel a closeness or a spark quite as naturally. It can be hard for them to find people they relate to, and so they easily feel misunderstood or like it is impossible for them to really sate this loneliness.

The most important tool for the INFP to escape their loneliness is to understand themselves better. Learning who they are and what makes them unique is really a major step for them. INFPs need to understand why they feel so different and why this loneliness can be so challenging to get rid of. Once they realize this isn’t something they are doing wrong and it isn’t their fault, it can help them find ways to overcome it. It isn’t that the INFP needs to change or that they are doing something wrong, they simply need to become more open to understanding themselves so that they can search for their true tribe and family. The INFP can certainly find people who appreciate them for who they are, this just sometimes requires a bit more effort and openness. The internet can actually be a great tool for the INFP, since they can find people who might not live close but who actually share the same interests and personal struggles. People who are like-minded and unique will enjoy the INFPs presence, even if this isn’t someone they meet in person right away. This doesn’t mean they are incapable of making connections close by, it is just something which can help them gain confidence and start to realize that there are people out there who won’t make them feel lonely. The INFP just needs to accept their differences, and learn that there is nothing wrong with them, so that they can open up to people who do want to understand them on a deeper level.