Here’s How Theatrical You Can Be, Based on Your Personality Type 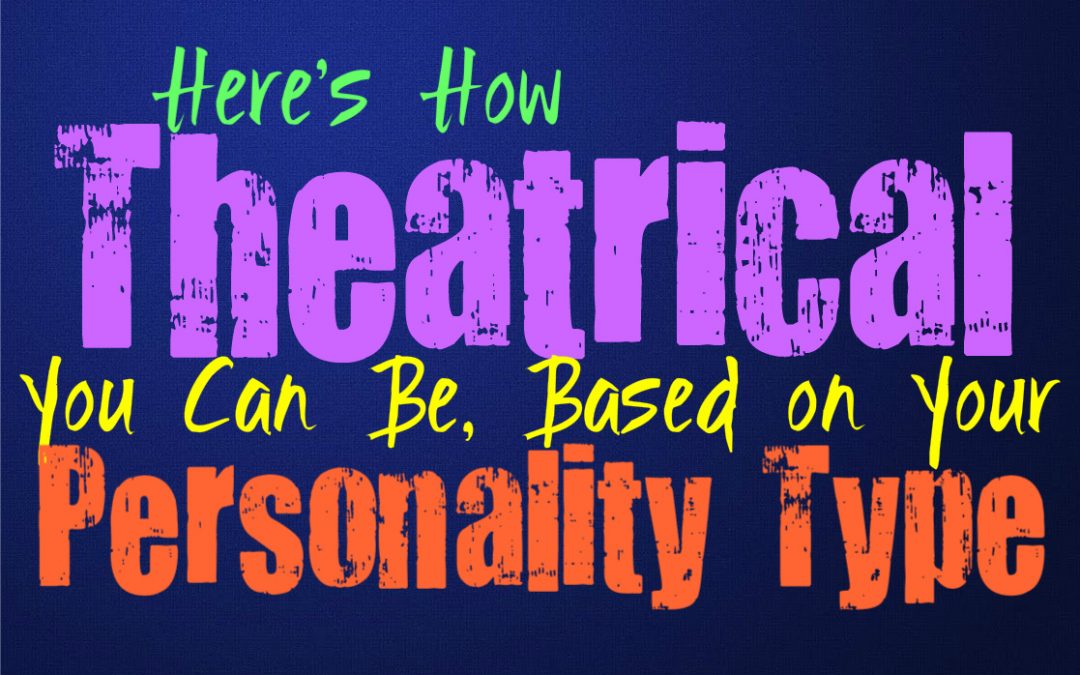 Here’s How Theatrical You Can Be, Based on Your Personality Type

Some people are more interested in laying low, while others can be rather theatrical. Being over the top can actually be a great thing, and helps people create excitement. Here is how theatrical you can, based on your personality type.

INFJs aren’t often seen as theatrical people, since they prefer to keep themselves a bit more reserved. While INFJs don’t appear to be all that theatrical, they can be entirely different around their loved ones. When they are comfortable with someone their more over the top side can come out, and INFJs sense of humor can actually be a bit zany. They enjoy being able to express themselves and can get caught up in this when they are around the right person who makes them feel more at ease being who they are.

ENFJs can be a bit theatrical at times, since they are a bit larger than life. ENFJs care about helping others but they also want to be impressive to their loved ones. Sometimes they can become theatrical when they are trying to impress the people close to them, or when they simply want to make someone like them. ENFJs don’t try to do this in a negative way, but they definitely have a theatrical side to their personality at times.

INFPs can seem a bit quiet and reserved but they have other sides to their personality. When they are around the people they trust and love INFPs can be extremely different. INFPs can become a bit goofy and even seem theatrical when they are around those who make them comfortable. They can become intentionally theatrical in order to entertain the people around them, INFPs in this mood are truly entertaining and fun to be around. They know how to keep people’s eyes on them, and often have great senses of humor.

ENFPs can definitely be theatrical at times, and enjoy being able to entertain others. They sometimes act overdramatic intentionally, just to be amusing. They will often admit to being theatrical eventually, and only do this to be playful and fun. The more dramatic and over the top qualities of the ENFP are actually what causes them to be so whimsical and lovable. They know how to make things fun instead of having every second be overly serious and stressful.

INTJs really aren’t theatrical people, and prefer to keep things low-key most of the time. When they express something important to them, they often do this in a precise and factual manner. INTJs prefer to express things in a way that is calm and collected, instead of becoming overly dramatic about it. They aren’t usually theatrical people, since they are happiest when they can learn and grow, instead of simply entertain those around them.

ENTJs can sometimes be theatrical people, especially if it gets their point across. They aren’t afraid to be a bit dramatic when they need to get something done. For the ENTJ the most important thing is being efficient and driven, which is why they aren’t afraid of being a bit theatrical. They are intense people and sometimes they need to be a bit theatrical in order to get people motivated in the direction that they want. ENTJs are larger than life people who can certainly be captivating and entertaining when they want to be.

INTPs really aren’t theatrical people most of the time, and prefer to keep their thoughts and feelings inside. Their inner minds are often more entertaining than the outside world, and they don’t feel the need to be overly dramatic. They can often seem much more low-key, especially when they are around new people. INTPs might have moments of being theatrical, but only when they are around someone who inspires them and brings out this more over the top side of their personality.

ENTPs can definitely be theatrical people, oftentimes this is intentional. They enjoy living their lives with passion and can sometimes go over the top when they are trying to make a point. ENTPs don’t like being subtle, since they don’t like restraining themselves in this way. Sometimes ENTPs can be a bit theatrical in order to test their limits and the limits of those around them. They are also very entertaining people who enjoy being able to amuse those around them.

ISTJs really aren’t theatrical people and are often more reserved around others. While they do have a humorous and playful side, they still aren’t dramatic about it. ISTJs really don’t like being theatrical and often believe this is pointless and even dramatic. When they see people who are over the top it leaves the ISTJ feeling annoyed, and like that person is likely insincere.

ESTJs can sometimes be theatrical, especially when they are expressing themselves. They are often intense people who can go over the top trying to make a point known. They also enjoy being center of attention sometimes, and will be theatrical when they are recalling story or trying to connect with the people around them. ESTJs are expressive when it comes to motivating others and trying to be as efficient as possible in order to get something done.

ISFJs aren’t often theatrical people and prefer to be more reserved. They are more focused on taking care of their loved ones than they are in being over the top. ISFJs are respectful people who are very conscious of the feelings of others. They don’t want to do anything that might upset people, and this is why they often avoid theatrics or loud expressions.

ESFJs aren’t usually theatrical people but they do have their moments. They are passionate about certain things, especially when their loved ones are connected to something, and this can sometimes cause them to seem a bit theatrical. ESFJs do prefer to keep control of everything though, and want to be sure that being over the top doesn’t affect anyone in a negative manner. Their main focus is tending to the needs of their loved ones, and this is what matters most to them.

ISTPs really aren’t theatrical people, and prefer to keep low-key most of the time. ISTPs often think things through before speaking outwardly, which makes them appear much less dramatic. They are problem solvers who enjoy being able to handle things themselves. They really aren’t interested in foolish theatrics and often feel like people who are theatrical are a bit obnoxious.

ESTPs do have theatrical moments, especially when they are passionate about something. They can become a bit over the top, since they live their lives to the fullest. There are times when the ESTP can seem dramatic, but they simply enjoy being able to go after what they want. When they are feeling excited or upset, they can definitely pull out some theatrics in order to make their feelings clear.

ISFPs try not to be theatrical, but they can be this way around their loved ones. They don’t like being too expressive around strangers but when the ISFP trusts someone they often feel free to be themselves. They can become theatrical when they are passionate and will enjoy expressing themselves openly around the people who make them feel at ease.

ESFPs can definitely be theatrical people, especially when they feel like expressing themselves. They enjoy being able to be over the top at times, since they are so passionate. ESFPs also enjoy entertaining others and sometimes this requires theatrics. They enjoy being this way since being the center of attention often makes the ESFP feel appreciated and happy in the moment.