How Do You Feel About Receiving Special Treatment, Based on Your Personality Type 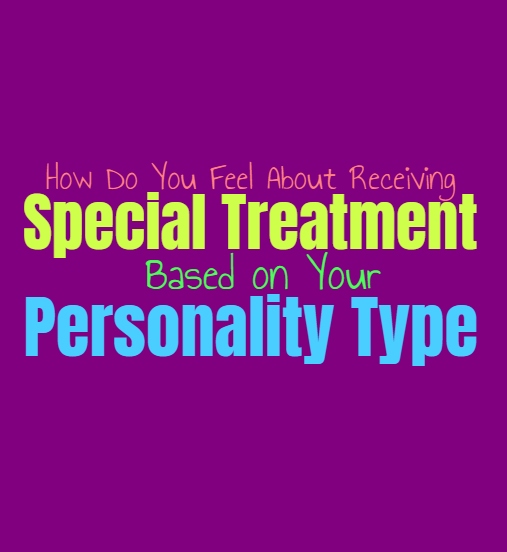 How Do You Feel About Receiving Special Treatment, Based on Your Personality Type

While some people will accept special treatment and privileges, others feel this is unfair. They likely feel guilty in these situations and don’t want to accept anything they don’t deserve. Here is how you feel about special treatment, based on your personality type.

INFJs don’t mind receiving special treatment when it is from people very close to them. While this isn’t something they expect, they do enjoy feeling special to the people they love. INFJs don’t want to feel like they are demanding this time of treatment, but they do enjoy receiving it on occasion. INFJs don’t think that special treatment should be given on a large scale or for more important things though, since a sense of fairness is also very vital to them. They just want to be sure that they find that balance and can be a bit more objective with certain details.

INFPs really don’t enjoy when things are done unfairly and often feel like special treatment is wrong. They might have a hard time turning it down when they receive special treatment for something they truly want. INFPs will struggle internally with this most of the time, because they really don’t want to accept anything which seems unjust. They care about doing what is right, and want to follow their sense of inner morals. When it comes to special or preferential treatment, the INFP really doesn’t want to be someone who puts themselves into this position.

ENFPs really don’t like accepting some sort of special treatment when it feels like it is being done unfairly. They don’t believe in doing things in an unjust manner, but at the same time they can get caught up in the excitement. If they are really wanting something it might be difficult for them to turn it down because they are receiving some sort of special treatment. When it comes to things which aren’t vital, then they are more comfortable accepting this treatment. When it comes to very serious things in life they don’t want to push others out.

INTJs don’t mind special treatment, especially when it helps them advance. This doesn’t mean they’ll take advantage of people who don’t deserve it, but they do see how things cannot always be fair. When they witness others receiving special treatment, it might make them realize that they need to accept this in order to advance in certain situations. While some INTJs might want to fight against this, they also know when to pick their battles and try to do things the smartest way possible.

ENTJs believe in assessing each situations with a sense of logic and reason, and so they might be able to accept special treatment in certain circumstances. ENTJs want to be capable of using their minds instead of allowing emotions to cloud their judgment with things. When it comes to accepting some sort of special treatment, they want to assess the pros and cons of this before deciding whether or not they are okay with this idea.

INTPs don’t really like special treatment and might feel like someone is pitying them. They don’t want to feel like they are someone that others underestimate or try to hover over, and so sometimes special treatment can actually frustrate the INTP. They would rather find their own means of getting things done, rather than constantly go to others for help or for some sort of handouts. While INTPs are willing to accept certain advantages, most of the time this can be difficult for them.

ENTPs don’t really care for special treatment if it makes them feel as if someone is trying to pity them. They don’t like the idea of owing others and would rather handle things on their own terms. For the ENTP being in a situation where they feel obligated to someone else can really weight them down. When it comes to special treatment they often prefer to avoid it, and handle their choices in a more independent manner.

ISTJs don’t really focus much on special treatment, but that doesn’t mean they are incapable of accepting it. Most of the time though ISTJs focus on getting things done on their own terms and don’t like the idea of owing someone else. They would rather be capable of doing things efficiently without feeling like they are obligated. ISTJs are supportive of their loved ones and want to do whatever it takes to provide for them and so their might be times when they are willing to change their minds about special treatment if it can help.

ESTJs are often independent people who want to get things done on their own terms. While they do often prefer to approach things from a logical standpoint, there are times when they are willing to accept preferential treatment in hopes of advancement. ESTJs believe in doing whatever it takes to advance and be able to accomplish their goals and so they aren’t necessarily against the idea of accepting special treatment if it seems like the smart choice to make.

ISFJs do have their own set of strong inner morals, and so they believe in doing the right things. While they care about doing what is right and can be bothered by certain special treatment, they will accept it from their loved ones. They do enjoy feeling like their loved ones with give them this preferential treatment, since they want to be seen as a priority. ISFJs also can have a hard time turning things down, since they really don’t want to offend those around them.

ESFJs do often have a belief that special treatment is unfair, and so they sometimes struggle to accept it themselves. They do sometimes feel awkward in these situations, because they don’t want to turn this down when someone is showing a sense of caring towards them. For the ESFJ it can be a confusing situation to be placed in, since they want to be capable of accepting this kindness but might not feel like it is entirely fair.

ISTPs don’t mind accepting special treatment, it often depends on the situation. They prefer to live in the moment and observe things from a more factual point of view. Because of this the ISTPs can sometimes accept special treatment, especially if it will help them get the things they want in life. They just want to be free to enjoy themselves, but sometimes special treatment might come with too many obligations.

ESTPs don’t mind accepting special treatment, since they don’t really focus on whether or not it seems fair. If someone wants to provide them with some sort of special treatment, they want to accept this graciously. ESTPs care about living in the present and doing whatever they enjoy most in life. They want to follow whatever inspires them, and do what brings them a sense of joy and excitement.

ISFPs care about doing the right thing but at the same time they want people around them who care enough to treat them as a priority. If someone they are close to is willing to provide them with something special then they are often open to this. ISFPs live in the present and seek what brings them joy, and so sometimes special treatment is something they are open to accepting from someone they love.

ESFPs don’t mind special treatment, actually they are often more open to this. ESFPs really want to be able to soak up the opportunities around them, and enjoy living in the present moment. When they have loved ones who are willing to give them special treatment then they are often comfortable with this. They enjoy feeling special, and want to feel like their family sees them as special.