What Does Hope Mean to You, Based on Your Personality Type 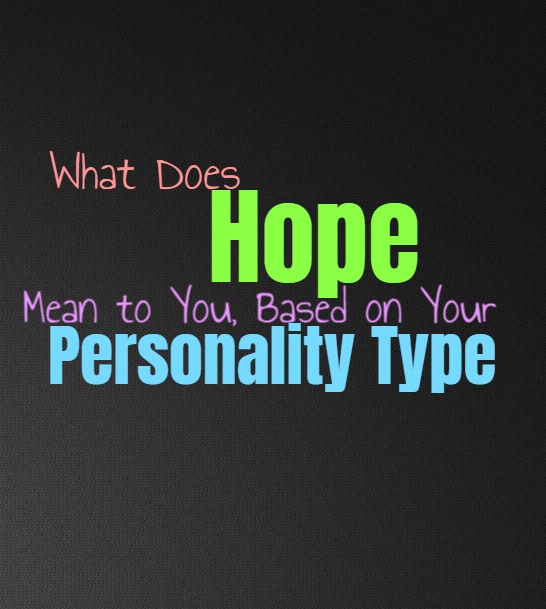 What Does Hope Mean to You, Based on Your Personality Type

For some people having a feeling of hope is vital, and it means being able to truly carry on. While a sense of hope is important to everyone, it often holds different meanings for people. Here is what hope means to you, based on your personality type.

For the INFJ it can be challenging to grasp onto hope if they have been hurt. Hope can be something which they are afraid of, not wanting to let it carry them away. INFJs don’t want to allow themselves to hope for something if they are afraid that it will actually happen. Part of them definitely has immense hope deep inside, but expressing this outwardly for the INFJ is not easy. To them hope can be something they fear can lead to disappointment, especially when they have been hurt by these feelings. While INFJs might be compassionate and inspiring people, they also have another side to them which can be a bit cynical.

ENFJs do believe in holding onto hope, which is often what propels them forward. Even when they are struggling to get something done, they want to be capable of always pushing through this. ENFJs don’t like feeling like quitters, and so they hold onto a feeling of hope when they are falling behind. For them having hope helps them believe that they are capable of overcoming anything they strive to, and so this is something which helps them dig deep and accomplish their important goals in life.

Since INFPs are natural dreamers, hope is actually deeply important to them. They need to be capable of holding onto this sense of hope so that they can believe that anything is possible. INFPs don’t want to let go of these dreams and beliefs, and this is why hope becomes so vital for them. INFPs care about remaining true to themselves and to their hearts, wanting to always strive for making a difference and being themselves no matter what. For them holding out a sense of hope that things can be better, is vital to their survival.

While ENFPs might bounce around from one thing to the next, this is because they are curious people. They are naturally dreamers who need to hold out hope that the world can become a better place. They also need to hold onto a sense of hope that they can achieve their goals and really reach for their dreams. For the ENFP this hope is vital, and keeps them moving forward and helps them remain positive even when things seem too challenging. This hope helps the ENFP keep going and helps them to never quit when it comes to the things that matter to them.

INTJs often focus on facts and creating a sense of structure and sureness in their lives. Before walking into something they want to have more than just a hope that they will succeed. This doesn’t mean INTJs live without hope for their future and the world around them, since it is actually the opposite. They just don’t want to have a mindless sense of faith towards things, and believe in using this hope to create that future they want. For the INTJ hope is about believing that as long as they use their minds they will achieve these goals.

ENTJs really do hold onto hope as an important part of their lives, even if this isn’t something people notice about them. Without this strong sense of hope the ENTJ would likely give up when things become too challenging. While they use their minds and strong wills to push through things, they also retrain a sense of hope that they can do whatever they set their minds to. The ENTJ might not believe in this in a more romantic and over the top manner, since they believe that in order to accomplish these goals they must work hard and always continue growing and learning.

INTPs might struggle with a sense of hope, but at the same time they need to feel this in order to keep moving forward. INTPs can be afraid of hoping that things will turn out a certain way, since they can be rather suspicious people. They might question their own feelings and have a hard time allowing themselves to really believe in hope. For the INTP this can be a back and forth and ongoing battle, since they are also naturally curious and imaginative people.

ENTPs need to hold onto a sense of hope that they can achieve the things they want and actually make a difference. ENTPs are curious people who bounce around in different directions because they want to learn and continue growing. For them stagnancy is miserable because they want to be capable of experiencing things. Hope is something which is important to them because it allows them to believe that they don’t have or need limits in their lives.

ISTJs are strong-willed and determined people, but they do hold onto hope and it is important to them. They need to always believe that things will improve if they simply work hard and use their minds. ISTJs do believe in being efficient and making things happen for themselves, but this is where the idea of hope comes in for them. They continue hoping even when things are challenging, that as long as they push hard they can make things happen.

ESTJs are very hardworking people who hold efficiency as one of their highest values. ESTJs also care deeply about a sense of loyalty, and this does make hope important for them. Even when things are challenging the ESTJ needs to be able to continue hoping that there are people out there who will stand by them. They don’t want to let people in their lives who are not worth their time, but this hope helps them continue moving forward and waiting for the right connections.

ISFJs do hold onto hope as something deeply important, since they need to always believe that things can work out. ISFJs work hard to care for their loved ones and want to be supportive of everything they do. Even when things are difficult the ISFJ needs to be able to hold that things will get better if they just keep moving forward. ISFJs can find themselves juggling so many things at once, and so for them hope that this is worth their efforts is something important.

ESFJs need hope in their lives for many reasons and they use this sense of hope to keep them moving forward. ESFJs invest a lot of their energy in tending to those around them and trying to achieve their goals in life. They don’t believe in giving up even when things are difficult, and because of this hope is truly vital for the ESFJ. Without this sense of hope they would likely feel like giving up, which would be something awful to the ESFJ.

ISTPs might not seem like the most hopeful people since they can sometimes have a more mysterious or even cynical outer shell. This doesn’t mean that the ISTP lives without a sense of hope, since they do hold onto these hopeful thoughts. ISTPs care about information and for them it is important to continue hoping that humanity will feel this way as well. While they see people who might appear ignorant, the ISTP needs to continue hoping that there are people out there who are not this way.

ESTPs can appear rather cynical but that doesn’t mean that hope is not important to them. For the ESTP hope is something which should be combined with facts and useful information. While they believe in hoping for a better future, they also believe in using that hope to really learn how to achieve those goals. ESTPs don’t believe in just sitting back, instead they want to dive in and really experience their lives.

Hope is deeply important for the ISFP, since they are naturally dreamers. Without a sense of hope they will lose their inner strength and will to continue pushing forward. ISFPs hope for so many things, but mostly they hope to make a difference and make real connections. For the ISFP hope is quite possible the most important thing in their lives, and is something they need to maintain and protect without allowing others to make them doubt.

ESFPs do need to hold onto hope, as without it they really aren’t themselves. ESFPs require hope to keep moving forward, since they need to always believe that life can be better and they can achieve their dreams and goals in life. Without this sense of hope the ESFP often becomes unhappy and no longer seems like their bubbly and vibrant selves. They are dreamers at heart, and so holding onto hope is what causes the ESFP to truly thrive.