Which Traits Can Become Your Crutch, According to Your Personality Type 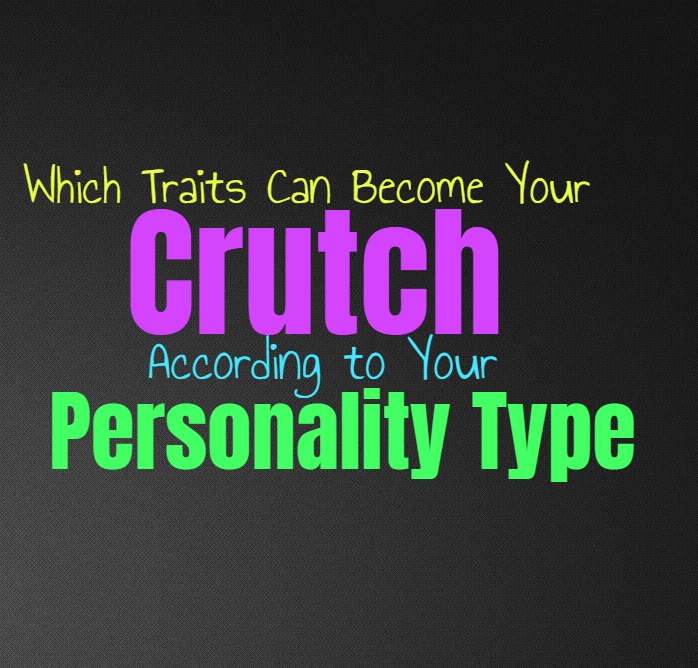 Which Traits Can Become Your Crutch, According to Your Personality Type

We all have certain natural behaviors and traits which sometimes become a crutch. While these things are often strengths, they can also keep us from growing or expanding in different directions of our lives. Here are the qualities and traits which can sometimes provide a crutch for you, based on your personality type.

INFJs are intuitive people who believe in being prepared for things, and don’t like to do anything which might harm someone else. Sometimes their desire to be considerate of those around them, is exactly what they use as a crutch in life. They find themselves held back and incapable of really moving forward or taking risks, because those risks might harm someone they care for. Instead of stepping out of their comfort zone, the INFJ often uses these excuses as a crutch, and this can cause them to avoid making choices which might lead to failure.

ENFJs often use their perfectionism as a crutch in life, even though it might not be obvious. They don’t like making mistakes and work hard to provide for the people they love. ENFJs strive to be everything to everyone, and this is something that actually limits them in some ways. ENFJs can be much more guarded than people realizing, not wanting to accept any flaws they might have or mistakes they might have made. This causes them to lack self-reflection in life, and sometimes this can be the crutch that prevents them from growing and becoming an even stronger person.

One of the greatest crutches for the INFP is isolation, and the fact that they are such unique people. There are times when they use their unique personalities as a way to shield them from ever really letting someone understand them. While INFPs strive to be open and wear their heart on their sleeves, they don’t always accept when someone does understand their sometimes unusual nature. This can be a defense mechanism to prevent them from getting hurt, but simply ends up hurting them in different ways and prevents them from being seen how they want to be.

ENFPs often use their curios nature as a bit of a crutch, without ever recognizing that they are doing this. ENFPs enjoy exploring new things and dislike any sense of stagnancy in their lives. Instead of committing to just one thing, the ENFP wants to be free to explore many different paths and options. This can actually be a crutch for the ENFP, since they are afraid of making the wrong choice and setting down in a way that causes them to miss out on something different. Instead of choosing one thing they choose many, and sometimes this holds them back from stability in a way that they would actually enjoy.

INTJs use their minds and their intelligence as a crutch sometimes, resorting to their sense of knowledge. They are intellectual people who strive to learn and continue amassing as much knowledge as possible. They truly despise ignorance and want to find a way to rid the world of it whenever they can. While INTJs are often intelligent people, they can use this as a crutch when it comes to really opening up to people. INTJs resort to the mind to answer things in life, and this can prevent them from listening to their hearts when they care for someone. INTJs neglect their own emotions, and this can certainly be something which backfires down the line.

ENTJs can use their strength as a bit of a crutch sometimes, since they don’t easily let their guard down. ENTJs want to be seen as efficient people who do not possess many weaknesses. This can cause them to put up too many walls around others, even the people they care for deeply. The reason this becomes a crutch, is because ENTJs fear being rejected and do not want to get hurt when they expose their inner emotions. Instead of expressing those emotions they want to appear strong, and this is certainly something they use as a crutch.

INTPs often use their unique minds as a bit of a crutch, not wanting to really let people in. They often feel misunderstood throughout their lives, but this can lead to them becoming more withdrawn and defensive. While the INTP can enjoy solitude for long periods of time, this can result in them isolating themselves and avoiding opening up about their feelings. INTPs use the fact that they feel misunderstood as a crutch, because they become too guarded to ever let anyone really understand them in the way they profess to want.

ENTPs can often use their sense of wit and charm as a bit of a crutch in life. When the ENTP feels uneasy or exposed in some way, they can easily resort to humor and sarcasm as a way of deflecting. For ENTPs this becomes a crutch, since they find ways to protect themselves from feeling exposed or vulnerable around others. ENTPs don’t like expressing their emotions and often feel uneasy when they are forced to do so. Instead of willingly opening up, the ENTP often resorts to humor as a way to express themselves.

ISTJs often use their practicality as a bit of a crutch, especially when it comes to avoiding emotions. They show their affections to others by being practical and tending to their real life needs. ISTJs work hard to protect those around them, but sometimes this can be what holds them back from expressing their emotions. ISTJs can be uncomfortable opening up or being vulnerable, and do struggle to really understand emotions. This is something they often avoid, simply by focusing on their work ethic and focus.

ESTJs can sometimes use their sense of drive as a bit of a crutch in their lives. They focus on getting things done and want to find a way to reach all of their goals. They push themselves to overcome challenges and to get things done as efficiently as possible. This focus on progressing and always being practical, is sometimes what they use as a crutch. ESTJs protect themselves from vulnerability by working hard to avoid failure and always focusing on moving forward. They are often afraid of expressing their emotions, and so they use their sense of focus and efficiency as a crutch.

ISFJs often use their care taking behavior as a bit of crutch, since they focus all of their energy on others. The fact that ISFJ focus on taking care of their loved ones, sometimes prevents them from focusing on themselves. Instead of stepping out and taking risks, the ISFJ focuses on doing what is best for those around them. This also prevents the ISFJ from figuring out what they want, and so they don’t often step outside of their comfort zone. Their love for others can sometimes be their crutch in life, preventing them from looking inward.

ESFJs do sometimes use their empathy and love for others as their crutch in life. They find themselves so focused on taking care of others, and so they sometimes forget to take care of themselves. Instead of self-reflecting and figuring out what they want, the ESFJ puts their energy into helping their loved ones figure out the answer to this question. For the ESFJ this prevents them from stepping out of their comfort zone, and also helps them feel a bit safer without realizing they are doing this.

ISTPs often use their desire for isolation as a crutch, without really noticing they are doing this. They find themselves so focused on their sense of independence, that they don’t actually reflect on their emotions or the emotions of others. ISTPs can sometimes be afraid of really expressing themselves and diving into their emotions, and so they simply avoid this. They can isolate themselves from others since they don’t want to really deal with people or the questions they might ask, but this can on occasion become a crutch which prevents them from true self-reflection.

ESTPs often use their sense of excitement and adventure as a crutch in life. They seek out what is thrilling in the moment, and sometimes fail to really look ahead towards the future. ESTPs seek out joy and experiences and can struggle to really settle down. While this can be what makes them strong-willed and unique people, it also can hold them back from planting roots and really uncovering their strengths and ability to succeed in their endeavors.

ISFPs can actually use their emotions as a crutch sometimes, always seeking out what inspires them in the moment. Instead of building something steady, the ISFP seeks out new things and new experiences. They sometimes find themselves jumping from one thing to the next, and this can prevent them from planting roots somewhere which might be rewarding for them. They may be afraid of really  risking that their choice is the right way, and so they seek out many different options.

ESFPs often use their sense of adventure and their desire to live in the present as a bit of a crutch in life. They live in the moment and do whatever brings them joy and excitement, but that doesn’t causes them to avoid solving problems. ESFPs can forgot getting things done and don’t always want to deal with the more stressful things in life. If they have a serious problem which is upsetting them, the ESFP might ignore this problem and focus on something which makes them happy.