How You Handle Feelings of Resentment, Based on Your Personality Type 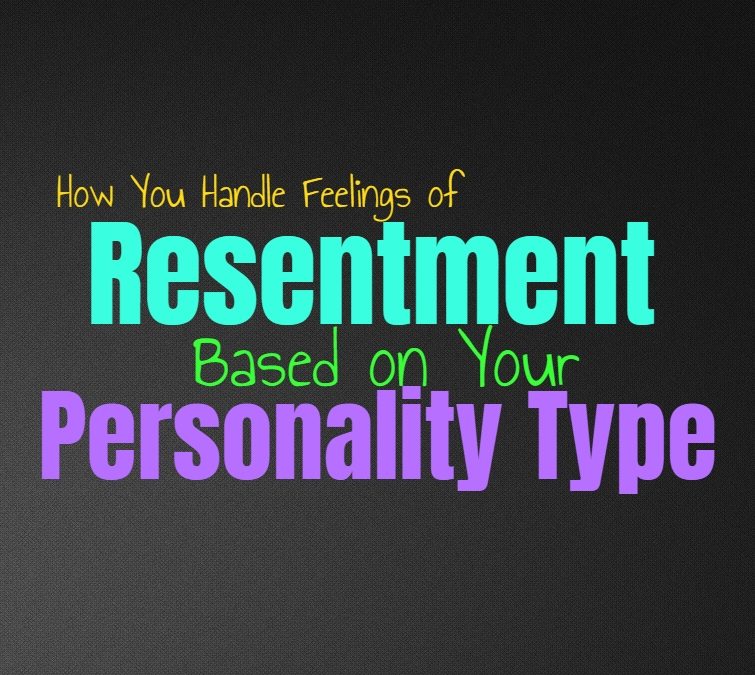 How You Handle Feelings of Resentment, Based on Your Personality Type

For some people it can be a bit overwhelming to experience resentment and they don’t find it easy to move past this. Others do their best to move past any resentment or grudges, and want to find a way to let go of these feelings. Here is how you handle feelings of resentment, based on your personality type.

INFJs don’t like being someone who holds grudges, but this happens nonetheless. When the INFJ feels sincerely slighted by someone they can certainly hold onto these feelings for a long time. Sometimes when they spend so much of their time and energy giving to someone else, this can turn into a bit of resentment. This happens when the INFJ gives and continues to feel used by the same person, and leaves them feeling frustrated and angry that they have spent so much energy caring for this person.

ENFJs spend so much time and energy caring for others, but sometimes this can lead to feelings of resentment. When the ENFJ expends so much of their energy trying to make someone happy and just working hard to build this connection, they simply want to feel something in return. If the ENFJ continues to fight for someone who only uses them, it does often lead to resentment. They find themselves giving so much to others and when they feel like they are being taken advantage of for too long, it definitely causes them to resent this person.

INFPs don’t like harboring feelings of resentment and so they try their best to remain positive. While they would rather let things go and move forward, there are times when the INFP can experience resentment towards someone. When people try to make the INFP feel small, or deny their moral beliefs, then they can start to build a grudge against this person. It isn’t intentional and sometimes the INFP doesn’t fully recognize it is happening, but the more someone tries to destroy their beliefs that harder it becomes for them to let go of those negative emotions.

ENFPs don’t usually like to hold grudges or feelings of resentment, but they do have a tendency to hold onto things. ENFPs will try to move on and let go of anything negative, not wanting to let it bring them down. In truth they often bury these feelings, and without realizing it the emotions are festering. ENFPs do experience resentment towards people who have wronged them, and can have a hard time really letting go of these things. When the ENFPs feelings are hurt they try to move on, but it really isn’t easy if that person deeply hurt them.

INTJs do experience feelings of resentment, especially towards people who have wronged them. INTJs can often hold grudges when people continue to take advantage of their help, mostly because they aren’t going to let this happen again in the future. When the INTJ loses trust in someone this becomes more than just resentment. When they are feeling this way towards someone it is something they take seriously, since INTJs believe in trusting their intuition about people.

When the ENTJ starts to resent someone it can be a difficult thing to deal with. They become frustrated with this individual, but at the same time it can be hard for them to let go of this person. When the ENTJ is committed to someone they don’t believe in just giving up on their relationship. They will often continue to try and make things work, even as the resentment grows. When the ENTJ resents someone they love, this will manifest by making them short-tempered and hard to deal with.

INTPs don’t like holding onto grudges, but it can really be hard for them to overcome feelings of resentment towards someone. INTPs don’t really talk about their emotions or open up about things, and so this can be the cause of their resentment most of the time. Instead of discussing what is bothering them, the INTP can often try to ignore this and focus on something more  logical to them. The fact that they neglect these feelings can cause the resentment to build, until they are unsure why they are so angry with someone.

ENTPs do sometimes hold grudges, but this isn’t necessarily something they do on purpose. They honestly try to let go of things and don’t like allowing their negativity to hold them back. The reason the ENTP might experience resentment towards someone, is often because they have continued to neglect their own emotions. When they are upset with someone they might not want to discuss it or try to work through these uncomfortable feelings, and so it just continues to build.

ISTJs try to let focus on practical things, but sometimes neglecting their emotions can lead to feelings of resentment. ISTJs focus so much of being the provider and work hard to get things done, and sometimes this does cause them to resent those around them. If the ISTJ feels like they are the only one putting in the effort, this can become draining and certainly causes them to resent their loved ones who aren’t really giving them the help and support they need.

ESTJs are hardworking people who strive to be the provider of their household. They want to take care of the needs of those around them and really value their commitments. While ESTJs definitely feel it is vital to uphold these responsibilities, it can become draining to them after a while. If they are the only ones doing the work it leaves the ESTJ feeling resentment towards those who aren’t working hard enough to help.

ISFJs care about those around them and so they work hard to tend to their needs. ISFJs will push themselves in order to make sure everyone is happy and their environment is harmonious. While they care about others and will invest a lot into them, this can actually lead to resentment without the ISFJ realizing it. When they do so much for others and feel like no one really noticed this, it can be deeply upsetting for the ISFJ and cause them to internally resent that person.

ESFJs often try to bury their feelings of resentment, but this can only make things worse. They often invest so much into their loved ones, and this causes them to feel overwhelmed after a while. They try to make others happy and work hard to care for them. If the ESFJ doesn’t feel like they are appreciated for what they do and are only being used, this definitely leads to resentment towards that person. They will try to move past this and subtly let this person know they need more from them, but if things don’t change it only becomes worse.

ISTPs try not to hold onto feelings of resentment, and do their best to let go. ISTPs live very much in the present and this can help them when it comes to removing resentment from their lives. When they do resent someone the ISTP simply tries to understand where this is coming from, and if this means they should disconnect from this person or if they should simply let go of those negative feelings.

ESTPs don’t like resenting people and often try to let go of these negative feelings. If someone has hurt them deeply for a long time and taken a lot from the ESTP, then they will certainly resent them. Only when the ESTP feels like someone has truly altered their lives in a negative way, will they hold onto this resentment. Most of the time ESTPs prefer to focus on the present moment and enjoy living their lives for now.

ISFPs really don’t like resenting people and so they try their best to let go of these emotions. ISFPs live in the moment and follow their hearts, and because of this they don’t like holding grudges. Resentment only makes the ISFP feel unhappy, and so they try to let go of this and move forward. They believe in living their lives with a sense of freedom and resentment only holds them back.

ESFPs don’t like resentment and do their best to move forward from these negative emotions. ESFPs live their lives in the present moment and want to soak up all of the experiences they can. Resentment can only hold them back from living their lives, and this isn’t something they want to allow. ESFPs try to let go of anything negative and for them resentment can only bring them down.