Does Having Options Overwhelm You, According to Your Personality Type 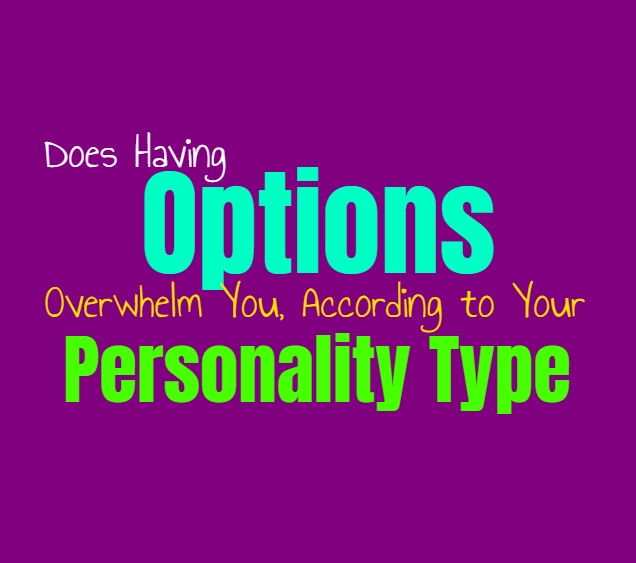 Does Having Options Overwhelm You, According to Your Personality Type

For some people too many options can actually be stressful, while others really enjoy having their options left more open to them. Here is how you feel about having plenty of options, based on your personality type.

INFJs don’t often like having an overwhelming amount of options, mostly because they know what they want. INFJs do sometimes stick to what they know and are comfortable with and don’t like feeling like they have to decide between too many new things. They don’t like feeling like someone else is forcing them to make one choice, but too many options just feels overwhelming for them. INFJs often do better when they go with their intuition on things, instead of needing to weigh every single options they have available to them.

ENFJs don’t really like having too many options, and would prefer to have just a few. For them having constant options can be overwhelming and leave them feeling stressed. ENFJs often prefer to do things the way they feel comfortable and follow a more organized way of living. Constantly being bombarded with new options and choices only makes it more difficult for the ENFJ to assess the situation and make the right choice. They do best when they can simply follow their intuition and go with what feels right for them.

INFPs actually enjoy having plenty of options, but this can cause them to analyze for a long time. They will sit there thinking through all of their potential choices and where they might lead. INFPs do enjoy analyzing and sifting through things, but this can leave them stuck for a while before they actually make that next move. For the INFP having a lot of options can be something they truly prefer and enjoy, but it can sometimes push them into a loop of just analyzing and never actually making a move forward.

ENFPs often love having their options and don’t like feeling forced to make one specific choice. They want to feel like the world is open to them, and like they can explore many different paths. For the ENFP having these different options is often exciting, but it can cause them to overthink for a long time before making a choice. They don’t want to miss out on things and so they might want to analyze for a while to figure out which choice makes the most sense for them.

INTJs don’t mind having plenty of options, but for them it is more about figuring out which path is the smartest. INTJs want to uncover the truth and so having plenty of options can be useful in this endeavor. They use their minds to analyze and figure out the wisest and most efficient path towards figuring out the truth. INTJs follow facts and evidence, rather than just spontaneously wanting to venture down some path which won’t provide them with the answers they are seeking. INTJs also don’t do things haphazardly, and prefer to make choices which are backed by reason.

ENTJs don’t like having an over abundance of options, since it only leaves them with extra things they need to weed through. ENTJs prefer to follow proven methods and choices they know will have the right results. They are very focused people who believe in being efficient, and don’t really support bouncing around from one thing to the next. For them it is more rewarding to have the right options, rather than a bunch of different fruitless choices.

INTPs do enjoy having plenty of options, but they can get caught up in analyzing them a bit too much. They will spend so much time considering all of these different potential paths, and this can cause them to avoid actually making that next step forward. INTPs do their best to analyze and figure out which choice is the best one for them, but they can see so many different paths and potential outcomes. For the INTPs it is exciting to thinks all of this through and imagine how it might go, but they do become a bit caught up in this.

ENTPs most certainly enjoy having their options open, and don’t like feeling stuck making the same mundane choices. They become excited when their choices are limitless and they can explore so many different potential paths. For the ENTP this means analyzing their options and feeling out which ones makes the most sense for them to explore. They do sometimes do this in a more spontaneous manner, wanting to simply step into something new in order to see what the reward might be.

ISTJs don’t really like having an overwhelming amount of options, since they prefer to follow the path they know and understand. ISTJs go for proven methods because this helps them prevent failure and mistakes. They would rather get things right the first time and often have a lot of responsibility on their shoulders. Because of this ISTJs don’t like taking too many chances which could result in things going wrong.

ESTJs are often more focused on proven methods rather than exploring different options. Having too many options just leaves them feeling frustrated and a bit stressed. This means the ESTJ needs to consider each choice in order to figure out which one is the most practical and efficient. They believe in following their goals and put in a lot of effort to get things done right instead of making mistakes along the way.

ISFJs can become overwhelmed with too many options in front of them, since they prefer to fall the path they know and understand. For them it is more rewarding to go down a path which has been proven and won’t leave to failure. ISFJs put a lot of pressure on themselves to succeed and take care of their loved ones and so they don’t want to take risks which might lead to them jeopardizing the happiness of those around them.

For the ESFJ too many options means to many chances to make a mistake. They don’t want to fail and work hard to be able to take care of and provide for their loved ones. Having a lot of options is going to stress the ESFJ out because they want to make sure they follow the best path. This isn’t because ESFJ are afraid of taking risks personally, they just don’t like doing this when it could jeopardize the well-being of their loved ones.

ISTPs do enjoy having their options open and don’t like feeling stuck making the same boring choices all of the time. Having too many options doesn’t usually overwhelm the ISTP, since they follow whatever feels right in that moment. They don’t need everything to be perfect, they simply want to experience some excitement and learn from whatever mistakes they might make along the way. For the ISTP it is more rewarding to have options, than it is to get everything perfect in their lives.

ESTPs do enjoy having options, but they aren’t always the most decisive people when it comes to certain things. They enjoy being able to experience new things though, and don’t like the more mundane things in life. For the ESTP it is thrilling to have choices and be able to dive into something new and exciting. They want their lives to be filled with passion and so having these options open to them, helps the ESTP feel like they have some freedoms.

ISFPs do enjoy having plenty of choices and options completely open to them. They hate feeling stuck in the same position without an opportunity to explore. For the ISFP not having enough options leaves them feeling trapped and this can cause them to become unhappy with their lives. Having plenty of options gives the ISFP a sense of freedom and openness in their lives, which is something they deeply desire. They are free-spirits who need to be able to change their minds without feeling like they are being forced in one direction.

ESFPs definitely enjoy having plenty of new options, and dislike feeling stagnant or stuck. Without enough choices the ESFP feels like they are trapped and this type of mundane lifestyle can become truly boring for them. While some people become afraid of too many options, ESFPs simply go with whatever feels right in that moment. They follow their hearts and go for whatever inspires them most, and so having options is rewarding for them.