What You Should Know About the ENTP Female 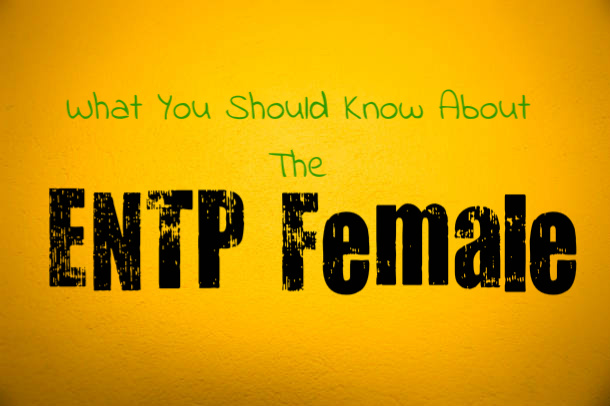 What You Should Know About the ENTP Female

ENTP women certainly possess a special combination of traits, ones that make them stand out from others. They aren’t always the most “average” of females, but this is actually something that can gain them a lot of positive attention (negative as well). Being an ENTP female certainly has its struggles, but it also has its advantages. Here are a few things that you should know about the ENTP female.

Rules Are Their Enemy

ENTPs generally dislike following rules, sometimes they will even push the limit just to see how far they can go. They enjoy testing situations and crossing various lines, just to figure out what the result will be. They are logic minded people, who also enjoy exploring new ideas and potential. ENTPs are often seen as rule benders, and will put themselves in situations that most people are too afraid to attempt. ENTP females are certainly no different, and enjoy taking risks in life. They will often be misunderstood because of this desire to break rules, but it is not done in an attempt to get attention. ENTPs simply desire to explore the potential that is out there, and find the best way to learn about something is to try it yourself. They are intelligent individuals, with a desire to keep their constantly working mind as satisfied as possible.

ENTPs can sometimes get into trouble because of their desire to test the limits, and will often get themselves into tricky situations. Thankfully, they are also rather charming individuals, which helps them slip out of the same trouble that they crawled into. This is a great skill for ENTPs, especially for the charming ENTP woman. She might not constantly lay on the charm for others, but she certainly has it hiding up her sleeve, ready to be used. ENTPs can be rather tricky people if they want to be, with an ability to manipulate many situations to their will. This does not mean that they will utilize their abilities, sometimes just knowing that they can is enough for them.

ENTP women will constantly surprise people with their “unusual” ways. They stretch the limits, which often causes them to take action that people do not expect. They aren’t afraid of getting their hands dirty, and will be the woman to take on the job that even the men around them are afraid to do. This certainly makes them stand out in a crowd, getting them noticed in many different social circles. ENTPs often evoke a strong reaction from their peers, this either results in them being misunderstood and avoided, or completely admired. They will always have people who are drawn to their intense personalities, and who enjoy their charismatic ways. ENTP women might not behave like the average female, but this is something that often intrigues others, especially when they utilize their charm.

Something that often surprises others about ENTPs (especially female ENTPs) is their interests. They might be seen taking martial arts classes, riding motorcycles, or simply mastering a video game. They enjoy trying new things, which often means that the possibilities are endless. ENTP will often be seen trying out hobbies that seem extremely strange, and this can be even more “odd” for an ENTP female. They simply do not care what people think about their interests, and would much rather continue to learn and grow as a person. They will often jump from one idea or interest to another one rather quickly. They want to constantly be learning and growing, and might become bored quickly with what they are doing.

ENTP women often favor male dominated careers, which can be both a good and a bad thing. It certainly comes with challenges when a woman is working in a career that is usually run by men. ENTP women often see this challenge as an exciting opportunity to push themselves. They aren’t afraid to grow in their career and climb the ladder by whatever means they can attain. They will often be seen as the boss in these various industries, and are certainly good at creating an environment that gives them respect. Being around men isn’t usually something that intimidates the ENTP woman, especially in a career that she feels comfortable in. The ability to push past boundaries and find the best solution possible, is a skill that ENTPs possess in abundance.

They Have A Nurturing Side

As an ENTP woman matures, she often begins to develop a more nurturing side to her personality. This isn’t something that always comes out in the most emotional of ways, but it is certainly there. The ENTP will often find ways to take care of her loved ones, and to show them that they matter. This makes for a great combination of strong and independent, but also caring and considerate. ENTPs who have developed their personality, actually become rather well rounded individuals. They can become very good at expressing compassion towards the ones that they love- combined with plenty of teasing and playfulness of course. Ultimately, they gain this nurturing side which can often surprise people who do not fully understand the personality types. They want to be sure that their loved ones are happy, and will actually do whatever they can to ensure that this happens.

This makes for a great combination in ENTP women, with both their masculine and feminine sides playing a role in their personality. It helps to create a strong woman, who knows what she wants, but who also has a great capacity for caring. The ENTP woman who has matured in this way, is certainly a force to be reckoned with.

The Struggles of Having an XNTP Personality