Are You Good at Making Mental Connections, According to Your Personality Type 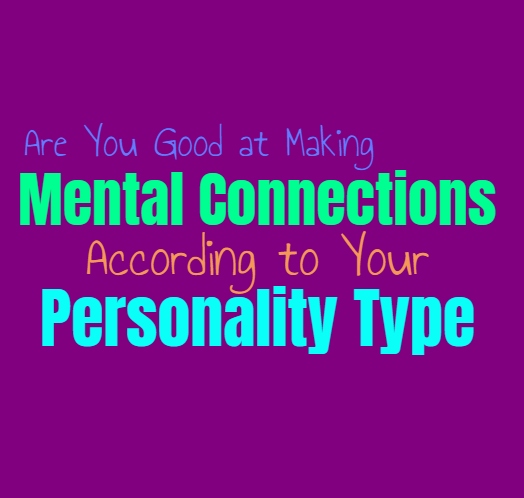 Are You Good at Making Mental Connections, According to Your Personality Type

Some people have minds which readily make connections between different things, sometimes in ways that are hard for others to follow. This isn’t the way everyone solves problems or comes to conclusions, but for those who possess this ability it is certainly useful. Here is how good you are at making mental connections, based on your personality type.

INFJs are often more focused on coming to conclusions about things, and seeing the deeper meaning in a more empathetic manner. They are certainly capable of making various connections, but there minds don’t often stray too far from their designated path. For the INFJ it is more natural to pick up on the details around them subconsciously, and add all of this together to figure out the most likely outcomes. They don’t like having to make constant connections to outside things, since this can feel unnecessary and oddly stressful. INFJs enjoy when things are clear and concise, and feel much more comfort in this way of thinking.

ENFJs are often focused on figuring out the most likely end result, so that they can create a clear path to where they want to be. Making tons of mental connections isn’t really how the ENFJ operates when it comes to problem solving. This can feel like a waste of energy, having to find all of these unnecessary connections in places where it won’t actually affect them. ENFJs use their intuition and sense of empathy to figure out there next step, they simply want to find a way to care for their loved ones and find the most concise direction to take.

INFPs definitely have a way of making tons of mental connections, and this often comes from their extraverted intuition. The INFPs mind will find many different patterns from the world around them, and find various connections which can readily be made. These connections helps the INFP to see all of the potential outcomes and various paths they can take. This is part of what makes INFPs so creative, as well as so open-minded about things. They recognize that there is not just one direction, but many different paths and connections to be made.

ENFPs are definitely good at making mental connections, and this is often something they do naturally. Their minds can see all of the various patterns and unusual connections in places that most people won’t even notice. This helps make the ENFP very perceptive, since they can pick up on details most people will overlook. Their minds can see so many different connections and potential outcomes, which makes them naturally creative and open-minded people.

INTJs prefer to focus on the end result and want to find the most efficient path to take. For them making too many mental connections and finding patterns is something that could go on for too long, and prevent them from actually finding the most logical results. INTJs believe in looking at the facts of a situation, and while they enjoy uncovering truths they don’t like wasting time on finding patterns which won’t actually lead anything useful for them. INTJs are capable of making useful connections, but not to a degree that it prevents them from focusing on the solutions.

ENTJs don’t prefer to make various connection and find patterns, when they prefer to find solutions. ENTJs are often searching for the end result and want to find the most efficient way to get there. They don’t like wasting time on too many potential outcomes, since all they need is to find the right one. For them it is important to work on finding the facts of a situation, not wasting time on all of the various connections which won’t actually be useful to their goals.

INTPs have minds which naturally make connections and find various patterns. Often this is something that can be difficult for others to follow, since the INTPs often finds themselves stumbling down the rabbit hole of ideas. Their minds naturally find these various connections and this is something that can go on for a long time before they actually come to conclusions about which path to take. The INTP sees all of the various potential outcomes, and this can be both a blessing and a curse.

The ENTPs inner mind is often filled with various patterns and mental connections. They can readily find so many different potential paths and their many outcomes. They find themselves spending a lot of time making these connections and following them down unusual roads. For the ENTP this ability to find these connections is part of what makes them so very creative, as well as eager to experience new things rather than remain stagnant going down one path.

ISTJs don’t really like having to make various connections, when all they really need is to find the right one. Their minds are capable of making mental connections though, they simply prefer to focus on simple and obvious facts. ISTJs do this because they are very focused on efficiency and believe in doing their best to get things done. They don’t like wasting time or energy on things that don’t actually provide them with progress or value. They work hard to get things done, and so ISTJs only use connections which can help them.

ESTJs are capable of making mental connections and seeing various patterns, but they prefer to focus on the ones which will be of use to them. ESTJs are more drawn to proven methods and don’t like wasting their time or energy on things which won’t quite help them move forward. ESTJs want to use information which is practical, instead of wasting time overthinking things which won’t get them to where they want to be in life.

ISFJs don’t often spend time making mental connections in ways which cause then to overanalyze, since they are more focused on taking care of others. ISFJs are practical people who believe in following a steady and dependable path. For them it is best to avoid focusing on making connections when this doesn’t really help them follow the path which will create harmony and happiness in their environment.

ESFJs are often capable of making mental connections and can analyze things more than people realize. They simply decide to put these thoughts aside most of the time, in order to provide for their loved ones. ESFJs are practical people who strive to care for those around them and ensure that they are happy. This often causes the ESFJ to avoid over-analyzing things, and they don’t want to spend too much time of energy on useless connections which cannot help them come to one simple conclusion.

ISTPs don’t really like making unnecessary connections, instead they focus on cold hard facts. They approach things from a logica and matter of fact place, instead of needing to spend time finding connections which are of no use to them. ISTPs focus on things which are tangible, instead of fanciful ideas which cannot really be proven. They are reasonable people and so for them making constant connections and finding patterns in places that aren’t immediately helpful, just seems silly.

ESTPs aren’t as focused on making connections or finding patterns, instead they focus on things which are tangible. They want to look at the facts of the situation, and decide to follow them as a means of making their choices. For the ESTP spending too much time thinking about various outcomes and potential connections between them, can seem a bit pointless. They focus on the here and now, and want to look towards things which are immediately useful.

ISFPs don’t really like wasting their mental energy making pointless connections. Instead they focus on living in the moment and enjoying the present. For the ISFP it is better to focus on tangible things, rather than looking towards some mental patterns and connections which won’t bring them any sense of joy or comfort.

ESFPs aren’t really much for making pointless connections, instead they want to soak up the moment and really enjoy themselves. They don’t focus much on the past, instead they live for the here and now. For the ESFP spending too much time over analyzing things can be a waste and really sucks up the enjoyment that they get from life.