Most Likely First Impressions of Each Personality Type 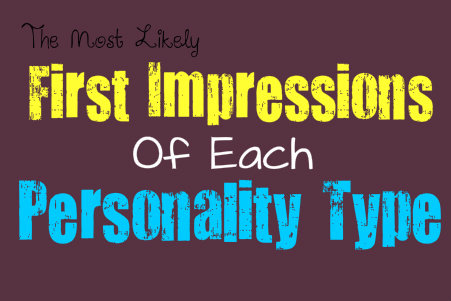 Most Likely First Impressions of Each Personality Type

Even though first impressions can often be incorrect, they still end up affecting how people view one another. First impressions may not be the best way to figure someone out, but they are certainly important. Here is the most likely first impressions that people will have for each personality type.

At first INFJs might appear kind and polite, but they usually will keep most of their personality hidden away. They don’t often come across negatively to people, since the INFJ is good at keeping much of themselves quiet. They don’t feel like being open with most individuals, and might even struggle to express themselves to those closest to them. Even though INFJs are introverted and prefer being alone most of the time- they can be very good at giving a positive first impression. They might appear slightly odd to some people, but in most cases they simple seem friendly and appropriate.

ENFJs often make great first impressions, since they are naturally social creatures. They have a knack for reading the emotions of others, which truly helps them establish a great introduction. ENFJs often know how to communicate well with people, and are not afraid to let their personality shine through. They are often keeping much of themselves secret, and only share these parts with those closest to them. Even though they are keeping parts of themselves hidden from people they meet, ENFJs will appear very open and friendly.

INFPs are often quiet when first meeting people, which might cause those people to project their own opinions onto them. This can create a rather inaccurate first impression- since people expect far too much from the INFP after meeting them. They will likely keep to themselves, and allow the other person to lead in the conversation. INFPs can be somewhat awkward in new situations, and in some cases their silly side could show a bit. If this occurs, people might find them a bit odd at first- but it is often in an endearing way.

ENFPs often make great first impressions, especially since they are outgoing and fun individuals. They let their bubbly side shine when they encounter new people. ENFPs are usually viewed as warm and likable, especially when they first meet someone. They often enjoy new opportunities, so they might even like meeting new people and making friends. People will likely view the ENFP as a bit silly, but they are naturally charismatic people.

INTJs are often great at figuring out how to appropriately behave in front of new people- it just entirely depends if they feel like doing this. If the INTJ does want to make a positive first impression, they can often force themselves to appear more outgoing and friendly. They will however, find this extremely exhausting and will feel drained afterwards. If the INTJ does not feel like putting on a show, then they will likely appear aloof to new people. They will seem much more serious than they actually are, and might intimidate some people. Instead of attempting to close off their internal thoughts, the INTJ will likely get lost inside their minds and leave the other person feeling like they INTJ simply is not interested in talking with them.

ENTJs often make good first impressions for most people- although they might seem a bit intimidating. They are great at making people laugh, and are very social individuals. ENTJs will often use their wit and sense of humor to break the ice when they meet new people. They are driven and hardworking people- but they also know how to have a good time. This helps people perceive the ENTJ as a fun person when they first meet them. They know how to express just the right parts of their personality, in order to make a good first impression.

INTPs will likely spend some time quietly observing people before they officially allow themselves to interact with them. This helps them to gauge how to properly conduct themselves, which can be helpful for them as far as first impressions go. They are excellent observers, and will attempt to figure out how to gain the best response from people. The truth is, INTPs may be able to find a way to make people like them- but in most cases they do not desire to execute this. Unless they believe that their efforts will be worth it, the INTP might find themselves keeping quiet through most of the conversation. If the other person sparks something that interests them though, the INTP will be capable of bringing out a first impression that causes people to notice their intelligence.

ENTPs are extremely charismatic, and often witty individuals- and this easily shines through on first impressions. The ENTP will likely be comfortable allowing their funny side to show in front of new people. They might even use their sense of humor as a way to break the ice, and keep people from getting too personal. ENTPs aren’t afraid of being upfront with people, but that doesn’t mean they find it necessary to express too much of their personal information. ENTPs are great at making people feel entertained, without divulging too much. In most cases, ENTPs are very skilled at making great first impressions.

ISTJs are often perceived as polite and intelligent upon first meeting them. They are not the most outgoing people, but at the same time they know how to behave around others. They are naturally good communicators, and will do their best to appear more extroverted in front of new people. ISTJs often know the right things to say, and will make a pleasant first impression for most people. They will often seem more reserved at first, since they are attempting to be appropriate. Of course, when people get to know the ISTJ better, they will see a much more complex individual.

ESTJs can be a bit abrasive for some people, but their outgoing personalities often make good first impressions. They know how to operate around people, and are not at all uncomfortable. ESTJs are usually capable of walking up to even the most intimidating person, and will not be afraid to make their presence known. ESTJs are rarely nervous to get to know others, and this often makes them great at making positive first impressions. They might even make a joke or two, in order to break the ice and help people feel more at ease.

ISFJs often make great first impressions, and are naturally good at interacting with people. They do prefer to keep to themselves, and can be a bit shy sometimes. Ultimately, ISFJs appear kind and friendly upon first meeting them. They may seem a bit quiet in front of some people, especially if they find those individuals to be judgmental or intimidating in some way. Most of the time, ISFJs make great first impressions, and are perceived as harmless but pleasant people.

ESFJs are often great at first impressions, and will be able to read the emotions of the room. Their ability to read people, helps the ESFJ figure out the best way to conduct themselves upon meeting someone new. They are excellent at appearing warm and open with people, even though they likely keep much of their personal information to themselves. ESFJs may be a bit awkward if they are nervous about making a great impression, and might appear more quiet than usual. They are simply observing and figuring out how to properly behave in front of this new person.

Most people’s first impressions of ISTPs, is that they are aloof and extremely cool. They are often comfortable in their own skin, and do not pretend to be anything other than themselves. ISTPs are down to earth individuals, and this often shows itself immediately. Some people might be put off by their relaxed and cool demeanor though, and might view this as them being somewhat rude and distracted.

ESTPs often make decent first impressions- but are usually seen as fun and maybe a bit wild. They enjoy making new friends, but will often attempt to impress others. ESTPs enjoy being liked, and because of this they will attempt to behave in a way that amuses other people. This can sometimes cause others to assume that the ESTP is a bit over the top, but in many cases people enjoy their charismatic personality.

ISFPs can sometimes be seen as flighty when people first meet them. They have a rather carefree demeanor, and might even appear easily distracted. ISFPs do not like to put on an act in order to make people like them, so they will usually be themselves upon first meeting new people. They may be a bit shyer and quiet though- since they can sometimes be nervous around new people. ISFPs will usually be viewed as sweet and playful people- especially when people first meet them.

ESFPs often make great first impressions- especially since they have a fun and outgoing personality. Their ability to entertain others, often comes across very well when people first meet them. They enjoy making people smile, and will do whatever they can to bring a positive energy to their surroundings. Most people truly enjoy ESFPs when they first meet them, and will feel welcomed in their presence.