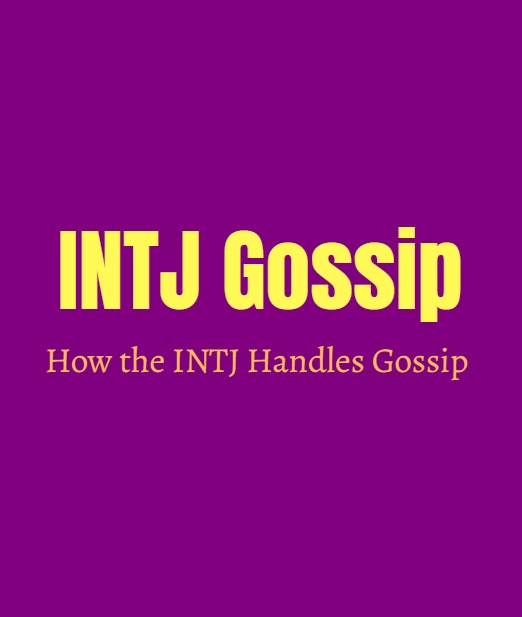 For the INTJ just hearing the word gossip so close to their personality type probably makes them cringe. They aren’t interested in things which are meaningless or shallow, and find that they are a vapid waste of time. INTJs also find themselves drained by too much social interaction, and the type of socializing connected to gossiping is likely to drain them almost immediately. They might even find it hard to keep it to themselves just how annoying they find gossips. For the INTJ anything relating to small-talk is something they try to avoid, even around the people they like and are friends with.

For the INTJ there isn’t much appeal or value in gossip and so they avoid it quite vehemently. They don’t really care about the lives of strangers or other people, unless those lives directly affect them. This isn’t because they don’t care, they just don’t see the point in sticking their nose into people’s private lives. The INTJ is certainly curious about those close to them, especially someone they are romantically interested in. They might even spend a lot of time researching that person and trying to learn as much as they can about them before pursuing them. For the INTJ this isn’t about gossiping, it is about trying to uncover more about this person and what makes them tick. They become curious because the INTJ wants to understand the connection they feel and figure out if they should get to know this person better in a romantic sense. This is really the only time the INTJ finds themselves curious about the personal lives of others, except for friendships.

With their friends the INTJ does see the need to pry into their personal business, they would rather allow those people to share when they are ready. This is why they are really don’t enjoy gossip, since for the INTJ this feels like a lack of respect for the boundaries of others. They don’t want people to disrespect their boundaries and try and sneak into their private lives, and so they aren’t likely to do this to those around them. They also just don’t find it all that interesting to gossip about trivial subjects and waste their energy chattering to people who they don’t trust all that well. If someone is a constant gossip the INTJ definitely won’t trust them, and likely keeps them at a distance because of it. They find this type of behavior exhausting and would rather be around people who can keep their mouths shut when the time calls for it. There are some scenarios where the INTJ might listen to gossip, but only if it could be useful to them for some reason. If it helps them understand how to behave around someone in a work setting, then they might be more open to it. For the INTJ these things have to serve some sort of logical purpose or else they become completely disinterested. If there is a more practical reason why the gossip might actually be helpful, then they will take it into consideration. INTJs are also aware that not all gossip is accurate or truthful, and so they prefer to do their own research to figure out what is accurate and what isn’t.

INTJs are not emotionally driven people and so at times they might not know how to read the emotional signs of those around them. This is why there are instances when listening in on gossip can be useful, since it can help them navigate how to behave around certain people. INTJs want to be able to be efficient in the workplace and this does mean being able to network with the right people. At times they will do their best to deal with the gossip if it can appear useful to them in some ways. For the INTJ it is more about being practical than it is about caring to hear the latest gossip about a person. They just aren’t naturally drawn to things unless it will directly affect them or someone close to them, other than that it becomes pointless for them. INTJs are personal and private people, who keep to themselves most of the time. They aren’t people-focused like some other types, and so it just isn’t all that important to learn about what drama other people have gotten themselves into.

INTJs are actually good at finding the right boundaries and setting them rather clearly. They know what they are comfortable with and what they don’t want in their lives. This helps the INTJ to draw the line when it comes to things like gossip as well. For them it is more about when this information is not helpful or useful to them at all, which is simple enough. When the gossip is simply vapid conversation about other people, the INTJ has not purpose for this and this is clearly where they draw that line. They try to avoid people who would gossip about these types of things, and are often good at ducking out of conversations and making their feelings about it rather clear.