ENFJs Jobs & Career Matches: How to Find the Best Job for the ENFJ 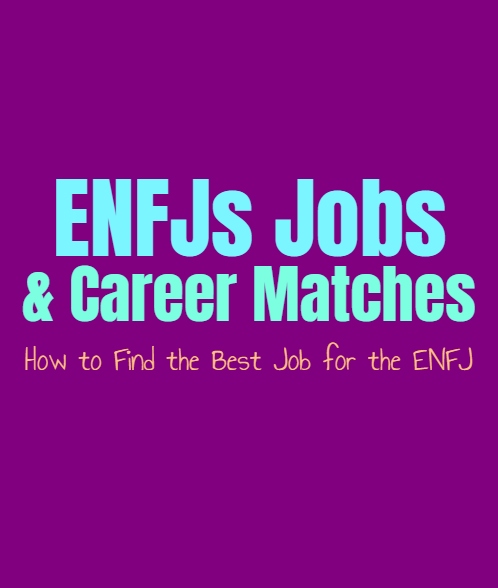 ENFJs Jobs & Career Matches: How to Find the Best Job for the ENFJ

ENFJs are very focused and often hardworking people, who are capable of adapting to many situations and career choices. The fact that they can find themselves adapting to most jobs, often makes it even more challenging for them to find the right one for them. They can easily find the best way to adjust their behavior and excel in most jobs. ENFJs will push themselves and be rather determined when it comes to improving and fitting in when needed. They don’t like failure in any way, and so they do their best to prevent this from happening. Since they focus so much on making others happy, sometimes finding the right career can be a challenge.

Career Choices for the ENFJ

For the ENFJ diving into their own desires and feelings is something they might avoid, in favor of making those around them happier. This can make it challenging for them to truly know which job is right for them, since they often consider everyone else too much in the decision making process. The ENFJ is likely to consider the more financially stable options, in hopes of ensuring that their loved ones will be properly cared for. While stability is definitely an important factor for the ENFJ, they should also consider which jobs inspire and reward them the most.

ENFJs are naturally when it comes to most medical care fields, since they enjoy anything which requires a certain level of empathy. Being able to help people and ease their pain in some way, is definitely rewarding for the ENFJ. They are great at showing a sense of compassion and understanding towards those in need. ENFJs don’t patronize or ignore people, instead they actually care about pleasing them and making them happy. This strong sense of empathy makes the ENFJ great in the medical field, especially when they have to work closely with their patients and show a sense of gentleness and caring.

ENFJs might struggle with letting go when certain things don’t go as planned or when a patient’s pain is out of their control. Not being able to really help is one of the biggest struggles and downsides for working in the medical field for the ENFJ. At the same time, they do get a lot of rewarding experiences from this type of career. ENFJs want to know that they are actually making a difference, and so they should work in some sort of career which helps them feel like they are really helping people. A stagnant job which doesn’t have this type of positive impact, is not going to make the ENFJ quite as happy.

ENFJs often make for some of the best teachers out there, since they enjoy being someone who others can turn to. As a teacher they are often the favorites, the ones who their students feel a sense of connection to. ENFJs don’t want to make their teaching process boring or strict, instead they want to bring out the passions inside of each one of their students. They enjoy seeing people thrive and watching them uncover deeper parts of themselves. The ENFJ teacher wants learning to be exciting and thrilling, and want to help guide their students on this path.

For the ENFJ being in a position where they can help inspire their students to learn and uncover who they truly are, is honestly a remarkable feelings. ENFJs care about making a difference and deeply want to be someone who can make an impact on the world in a positive way. Being a teacher may not be the job their family wants for them, but for the ENFJ it can be a truly rewarding and meaningful career choice.

Being that ENFJs are often naturals when it comes to speaking and even speaking for others, being a spokesperson is relatively easy for them. They often know the right words to say, especially when they have to smooth something over. ENFJs can also do damage control rather well, especially if someone has spoken for their brand in a way they want to defend. They can win people over with their charm and their empathy, knowing the right words to say and the right way to convey those words so that people trust and rely on them.

ENFJs are outgoing and charming people, which makes them excellent motivational speakers. They are good at speaking in front of people most of the time, even if it makes them nervous. ENFJs have a way of altering the mood of a room, and really know how to get people excited about something. The way they convey emotions and can naturally connect with the people around them, makes the ENFJ an amazing motivational speaker. They can get people excited and hopeful about something, and help them to really find this motivation inside of themselves. As long as the ENFJ believes in what they are saying and feels like the message is sincere and positive, then they will really benefit from this type of career. For them it simply has to be something real, and not feel like they are deceiving people. When they do believe in this message and feel they can help people because of it, then the ENFJ will really enjoy being a motivational speaker.

ENFJs natural sense of empathy does often cause them to lean towards any type of caretaker field. They are often interested in being counselors or some sort of therapist, since they thrive when they can help others. For the ENFJ being able to be there for people and really listen to their problems, is something they can do naturally. Being a counselor can sometimes be a difficult career path for the ENFJ but it often one which can also be rewarding and meaningful for them. The important thing is for them to remember not to take their work home with them, or else they may spend most of their nights worried about their patients and wanting to help them even when they can’t do so.

While it is important to remember that every personality type is different, there are still certain careers which will likely be less rewarding for each type. Any person can find themselves drawn to something different, and so the options for one person might not always fit into what is expected of them. That being said, most ENFJs find themselves less fulfilled in careers which deal with constant numbers and feeling cooped up in some sort of office. Something like accounting might be easy for some ENFJs, but that doesn’t mean they will feel a sense of fulfillment from this career. They often feel drained when they have to deal with constant numbers or facts, instead they need something more connected to people and helping them in some way.

For the ENFJ any career which has too many strict rules, often like the military or law enforcement, has the potential to be draining for them. Having to constantly follow certain orders which may not always make sense to them, isn’t really easy for the ENFJ. They know how to do this of course, but inside it can leave them feeling a bit exhausted and drained. ENFJs are actually better at being in leadership roles themselves, rather than having to follow the instructions of someone else who they may not entirely trust or want to rely on. This doesn’t mean they don’t possess a great deal of respect for these careers, ENFJs just don’t always fit happily into them.

When it comes to career strengths the ENFJ is blessed with many skills and abilities. They are outgoing people who can connect with others naturally, often being able to make useful connections and smooth things over in any situation. Their social abilities makes them naturals in most careers, since they can find a way to connect with people and improve things. ENFJs are also efficient people who can see around the corner of things, and use their intuition to come up with useful solutions and smart paths to follow. Their ability to see beyond just the current situation is a useful skill, and this helps them advance in most careers they chose.

One of the struggles for the ENFJ is their desire to follow their own path, and while this is a strength it can be a weakness in certain careers. They don’t like feeling like someone is demanding something of them, and can have a hard time with a more strict surrounding. ENFJs are also a bit stubborn when they know they are right about something, and don’t naturally back down when someone is trying to force this upon them.