Here’s How Much You Enjoy Solving Mysteries, Based on Your Personality Type 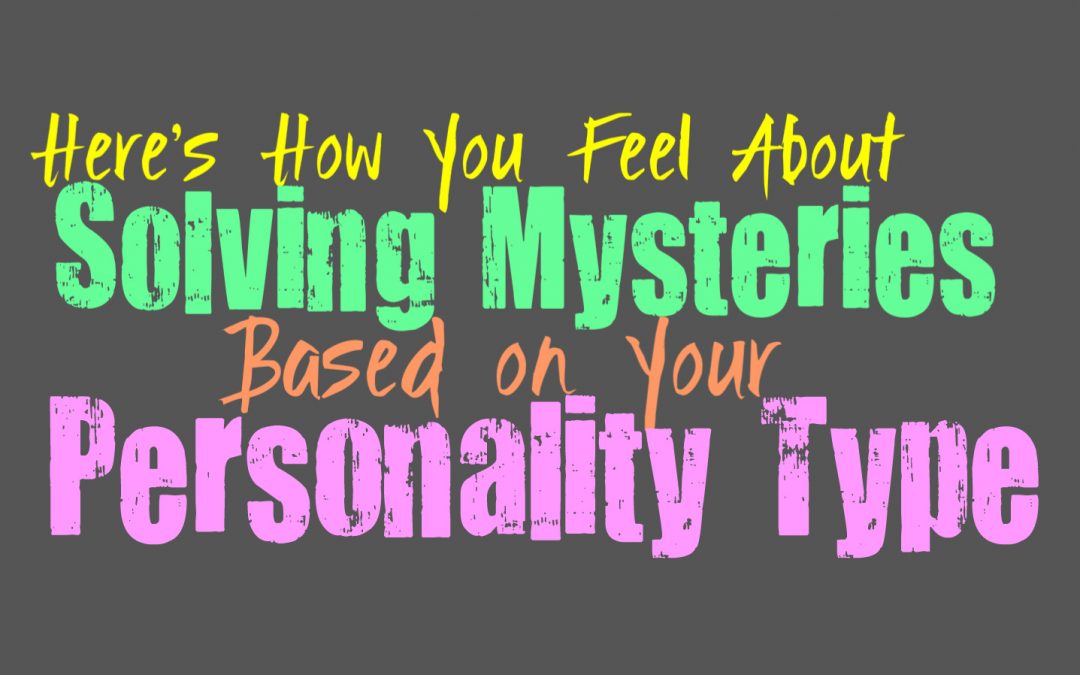 Here’s How Much You Enjoy Solving Mysteries, Based on Your Personality Type

While some people prefer to have everything laid out in front of them, others enjoy a good mystery. Sometimes the excitement of having to solve the mystery can be very rewarding, especially for those with good intuitive abilities. Here is how much you enjoy solving mysteries, based on your personality type.

INFJs are intuitive people, who are often naturally aware of things that others might miss. They usually see a mystery in different terms, since they can uncover most pretty naturally. There are times when something is hidden a bit too much and the INFJ can become annoyed by this. They prefer to understand things and be able to predict their outcome and when this becomes a struggle they can get a bit frustrated. INFJs don’t like being left in the dark, but when it comes to people they might enjoy a small amount of mystery.

ENFJs don’t mind a little mystery in their lives, since their intuition often makes understanding come naturally for them. People around people who can be a bit closed off, is sometimes a challenge the ENFJ enjoys. Being able to help this person open up so that they can understand them better and connect with them, is very valuable to the ENFJ. They enjoy these types of connections and strive to be able to understand the people around them better.

INFPs do enjoy a little bit of mystery in their lives, since it helps them feel challenged in a good way. They like being able to problem solve and uncover the details of something, especially if it requires plenty of internal thought. INFPs are intuitive people and being able to explore the different possibilities definitely excites them. INFPs simply don’t like having to solve the mystery of their loved ones, and prefer to have an open and honest relationship with these people.

ENFPs do enjoy a bit of a mystery, and are often very good at solving them. They like being able to take apart the information and figure out the most likely outcome. They are very in tune with the details around them, even the smallest things that most people will miss. ENFPs are actually surprisingly good at solving mysteries, since they are a bit of a mystery themselves. They enjoy the challenge since ENFPs can become bored fairly easily. Having something they keep them entertained is definitely a plus for the ENFP.

INTJs are often seeking out the truth, and because of this they don’t mind putting forth the effort to solve a little mystery. It really isn’t much different for them, since solving mysteries requires learning and intuitive abilities. INTJs are naturally good at uncovering the truth wherever they can, and are capable of figuring out the smallest details that others might miss. They enjoy being able to be the first to discover the truth, and like being ahead of the crowd when it comes to their awareness.

ENTJs do like a good mystery now and again, but in most situations they simply prefer to uncover the truth readily. ENTJs value efficiency so they dislike when anything might stand in the way of that. They work hard to get things done and for them anything that can jeopardize that is a serious problem. ENTJs are goal-oriented people, who value having people around them they can trust. Where ENTJs might enjoy a good mystery to be solved, is when it comes in a more competitive form. Where the ENTJ can utilize their intuitive abilities to show just how capable they are.

INTPs do enjoy a good mystery, since they are often good at being able to solve them. They like taking on new challenges and sometimes a mystery can be an excellent way to push themselves. INTPs are good at being able to pick up on the smaller details that most people end up missing. They enjoy being able to challenge themselves to uncover the truth, and even enjoy solving the mystery of certain people. For the INTP it is nice to have a challenge like this, since they can often become bored fairly easily.

ENTPs do enjoy uncovering mysteries, especially the ones that others find challenging. They like being able to push themselves and stretch their minds in this way. Mysteries help the ENTP to challenge themselves and they will often be capable of perceiving certain details that others miss. This can make ENTPs definitely skilled at solving mysteries, and this can sometimes annoy others when they are watching a movie together. The ENTP often knows what is likely going to happen well before anyone else does.

ISTJs aren’t often fans of having to solve mysterious, and would rather things that are apparent and understandable. They don’t like having to waste their energy solving some mystery when they could be focusing on something that feels more valuable to them. ISTJs value being able to get things done and be as efficient as possible, and having to work to solve some mystery feels a bit exhausting. They are practical people, who believe in doing their best at everything they do.

ESTJs are often good at figuring out certain mysteries, but sometimes it feels pointless to them. They are practical people who believe in doing what they can to improve their lives and the lives of their loved ones. ESTJs aren’t often interested in things that waste their time, especially when it gets in the way of their goals. When the ESTJ is enjoying some downtime they might like movies and TV shows with mysteries in them, and like being able to be the ones who solve them.

ISFJs aren’t usually fans of solving mysteries and often prefer to focus on things that are open and upfront. ISFJs simply don’t enjoy anything that stands in the way of their goals and hinders them from taking care of their loved ones. They enjoy openness and honesty, especially when it comes to their relationships. ISFJs prefer to get things done efficiently and can be perfectionists when it comes to taking care of others. For ISFJs mysteries can sometimes be more of a struggle than they are worth, and can end up causing them stress.

ESFJs don’t mind a little mystery in their lives, and often find it easy to uncover mysteries that connect with people. They are people focused and are naturally good at picking up on the little behaviors and changes in those around them. This can sometimes help ESFJs uncover certain mysteries, and they might even enjoy this. For the ESFJ too many deep mysteries can be exhausting though, especially when they are trying to get things done or take care of their loved ones.

ISTPs are natural problem solvers, which isn’t far from enjoying solving mysteries. They like being able to uncover the truth and can often pay attention the small details that add up to a conclusion. ISTPs enjoy a bit of a challenge and also like being able to push themselves to uncover certain things that others cannot. For ISTPs solving mysteries often comes naturally, since they can be a bit of a mystery themselves.

ESTPs don’t mind solving the occasional mystery, but it can become exhausting after a while. They prefer to focus on living in the present and enjoying the things that are built on facts. Having to get caught up on solving mysteries is something that the ESTP can definitely lose interest in, especially if it takes too much time away from something they would rather be doing.

ISFPs aren’t really fans of solving mysteries most of the time, and might find it a bit pointless. They would rather let things uncover themselves as time goes on, and enjoy watching it unfold. For the ISFP mysteries can be intriguing but that doesn’t mean they want to solve them. Sometimes it is enjoyable enough to simply allow things to happen and to watch as the mystery reveals itself.

ESFPs aren’t really fans of solving mysteries and can become a bit drained by it. They would rather focus on things that make clear sense to them, even though some things aren’t as mysterious to the ESFP as they are to others. They enjoy being able to soak up their surroundings and don’t want to waste their energy trying to solve some mystery that doesn’t mean all that much to them.