The Importance of Self-Preservation For Each Personality Type 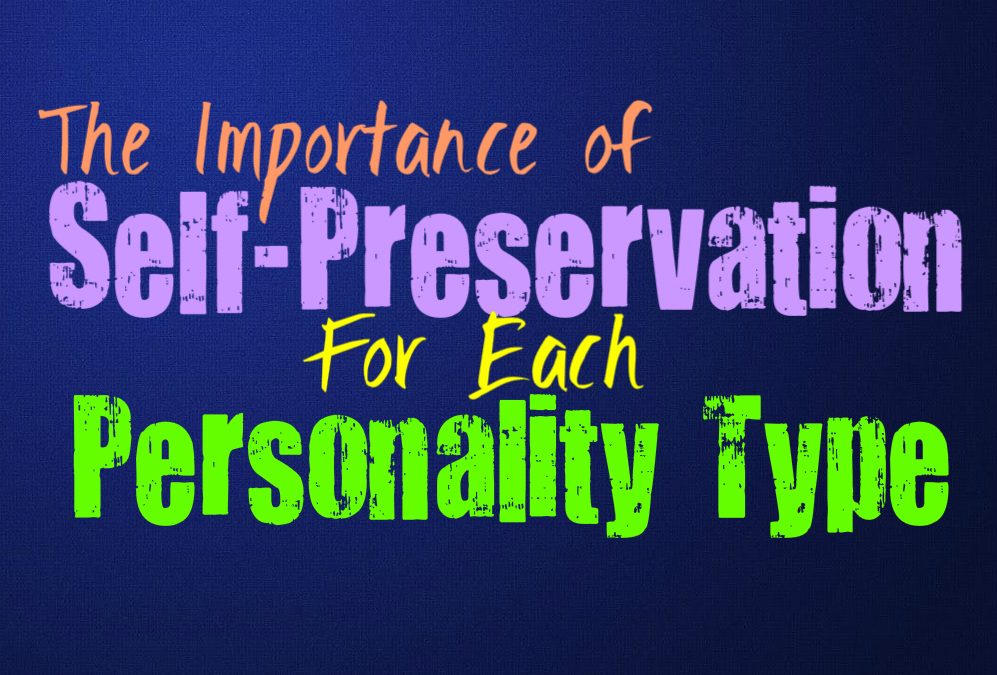 The Importance of Self-Preservation For Each Personality Type

INFJs are more capable of self-preservation when they have been through enough trauma in their lives to want to avoid it in the future. When this occurs they end up wanting to protect themselves from any future harm, and so their self-preservation skills start to really kick in. There are times when the INFJ might fail at their self-preservation attempts when someone they love is in the mix. They do a lot for people they care for and sometimes become a bit more reckless when their heart is involved in the situation.

ENFJs are often fairly good at self-preservation, especially if they have been through a lot in their lives. The more they have struggled the more they will feel the need to protect themselves in the future. While ENFJs in this situation do their best to defend themselves against future failings, they are often different around their loved ones. If someone they care for deeply is in a bad situation, the ENFJ might put themselves in harm’s way to assist them. They sometimes fail to really protect themselves simply because they put others first.

ENFPs aren’t really great when it comes to self-preservation, since they can be rather risk taking people. They sometimes jump into new situations without really paying attention to what might happen later on. ENFPs follow their hearts and sometimes this can lead them down paths which get them hurt. ENFPs don’t like holding themselves back when they are excited or passionate about something, and in these instances they aren’t really great with self-preservation.

INTJs are excellent at self-preservation and are very aware of their actions. They know when something is too risky and might put them in a situation they don’t desire. For the INTJ it is important to follow their own path and to be conscious of where their actions will lead. Self-preservation is important to the INTJ, especially in situations where they need to protect themselves from taking on some sort of damage. They don’t like taking risks and are certainly good at keeping themselves from getting hurt.

INTPs are capable of self-preservation, but it entirely depends on the situation. There are times when their curiosity can get them into situations which might not be great for them, and once they recognize their surroundings their self-preservation skills will certainly kick in. INTPs simply do their best to analyze the information in front of them and only want to take calculated risks. They strive to really uncover information and learn about new things, and sometimes this gets them into some messier situations.

ENTPs can sometimes fail at self-preservation when their curiosity gets the most of them. They are truly interested in learning new things and sometimes this gets them into some stick situations. ENTPs enjoy taking on new experiences and will often dive in without really being afraid of what might go wrong. They do analyze and consider all of the angles, but they realize that sometimes they need to really learn by being surrounded by something. There are times when they really don’t focus enough on self-preservation, but they can often utilize these skills when it comes to protecting their hearts.

ISTJs are definitely great at self-preservation and believe this is truly important. They work hard to get things done and don’t like when people stand in their way. While ISTJs are hardworking and strong-willed people, they don’t want their actions to get them into trouble. They are certainly great at self-preservation, especially with the more important things. They can sometimes be protective of their feelings and their lives, and so this definitely lends to their desire to self-preserve.

ESTJs are often very aware of their self-preservation skills, and often want to protect themselves. ESTJs don’t like taking risks which might hurt themselves or their loved ones. They definitely believe in protecting their own feelings and their lifestyles. For the ESTJ a sense of self-preservation is definitely very important, and they don’t want anything to distract them from this. They work hard and truly want to ensure that their lives are comfortable and protected.

ISFJs do believe that a certain amount of self-preservation is important in life, but they sometimes fail at this when it comes to their loved ones. They do believe in protecting their lifestyles and work hard to make sure everything runs smoothly. While they can be good at self-preservation in most situations, their behavior often changes when it comes to their loved ones. ISFJs might put themselves in harm’s way for the sake of their loved ones and want to do what they can to make them happy.

ESFJs are good at self-preservation in some situations, but they often put themselves in harm’s way for the sake of their loved ones. When someone they love is in need of their help, the ESFJ will do whatever it takes to make them happy. This can cause them to get into situations where they might completely fail to protect their own feelings. ESFJs can be good at self-preservation as long as they aren’t in a situation where they might need to put someone else’s needs first.

ESTPs are surprisingly bad at self-preservation, since they focus so much on living in the moment. They seek out the things that will fulfill them the most and enjoy being able to dive in. ESTPs are passionate people who don’t like feeling held back by a sense of fear or trepidation. They do what they can to go after the things they want in life and sometimes this puts them in riskier situations.

ISFPs aren’t always great when it comes to self-preservation, mostly because they wear their heart on their sleeve. Often the ISFP will expose their feelings and this can be a way of them getting themselves hurt. While they do get into sticky situations sometimes, they aren’t going to walk away from what inspires them just because they are afraid.

ESFPs might not be great when it comes to self-preservation, since they are passionate and adventurous people. They seek out the things which fulfill them in life, and sometimes this means taking risks. They don’t like allowing their fear to hold them back, especially when they are truly excited about something. ESFPs also follow their hearts in life and can often expose their own emotions in a way which risks them getting hurt.