How Well You Handle Jump Scares, Based on Your Personality Type 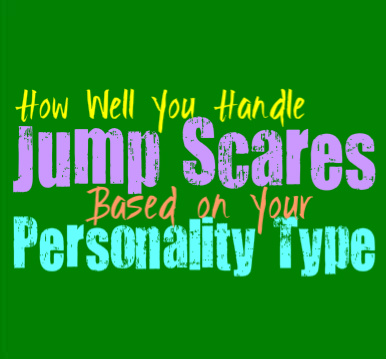 How Well You Handle Jump Scares, Based on Your Personality Type

The time of year for horror movies is approaching, which means jump scares are everywhere! Some people can scare easily, and find themselves becoming a bit jumpy when they are surprised. Here is how well you handle jump scares, based on your personality type.

ENFJs don’t usually get caught off guard by things, unless they are distracted. They are often aware of their surroundings enough to avoid getting shocked by jump scares. If the ENFJ is watching a horror movie they are often prepared for certain shocks and surprises, and can usually handle this fairly well. When they are likely to get caught by a jump scare, is when their minds are somewhere else completely. ENFJs can become distracted by their thoughts which is the only time they are likely to get surprised by a jump scare.

INFPs are daydreamers who are often caught up inside of their own minds, this can cause them to be a little bit jumpy. Since their thoughts are somewhere else most of the time, the physical world around them can be a bit overwhelming. In these situations the INFPs can get a bit caught off guard and find themselves jumping a bit. This rarely upsets them though, and they will do their best to settle down after they experience the jump scare. Even if the INFP is watching some sort of horror movie, they might be thinking about something else at the same time, and this is why the surprises can make them jump a bit.

ENFPs might be daydreamers but that doesn’t make them unaware of their surroundings. They are often rather observant people who are capable of picking up on little things. While they can pick up on certain things, that doesn’t make them impervious to jump scares. ENFPs can get so into something that there are moments when they can be caught up enough to be shocked by the jump scares. ENFPs enjoy getting caught up in things though, and like they want to seek out these types of thrills. If it is just a cheap scare then it won’t do much for them, but something truly unexpected will be fun for them.

INTJs can sometimes get caught by jump scares, but likely people won’t notice it. They are good at keeping their cool even if they are surprised by something. They do get caught up inside of their own minds and aren’t all that connected to the physical world around them. Whenever someone is more active inside of their own minds, it can certainly cause them to be shocked by certain jump scares. When they are paying attention to a horror movie it is usually difficult to shock them, since they can often predict when the cheap scares are going to occur.

ENTJs actually enjoy a good jump scare, especially in their horror films. They like being a bit shocked and surprised, since it at least keeps them feeling entertained. ENTJs often like shocking others, and enjoy being able to push their boundaries. ENTJs can believe that some jump scares are a bit pointless, and don’t always get them. It needs to be something truly surprising and well-crafted for the ENTJs to be truly surprised. They can find a lot of horror movies to be boring because of this, and the cheap scares just aren’t enough to really excite them.

INTPs usually aren’t very jumpy people, and so it takes a lot for horror movies to surprise them. Most jump scares don’t get them all that well, and they usually need a bit more to keep them entertained. INTPs can find themselves bored rather easily by most movies, especially horror films. For them it requires a bit more of a detailed storyline with some added creativity for the INTP to actually be entertained. There are some jump scares that might get them, especially since they can find themselves caught up in their own thoughts, but most of the time they see it coming.

Most jump scares don’t really surprise the ENTP, even though they wouldn’t mind if it did. They enjoy things that are thrilling and a bit shocking for them, ENTPs like to challenge themselves and might actually seek out things that could shock them a bit. Most horror movies can be a bit too predictable for the ENTP, and so they don’t easily find themselves caught off guard by jump scares. They enjoy the intensity of new situations, and so they are used to things that are intentionally thrilling.

ISTJs can sometimes get caught off guard by jump scares, but mostly because they aren’t paying attention. They can become distracted and bored by these sort of things and so it can be jarring sometimes. They usually don’t act all that surprised outwardly, even if something has startled them a bit. ISTJs keep their emotions inside, and actually find it difficult to express themselves in a way that others can easily recognize. So even if they are caught off guard by a jump scare, it is unlikely that people will notice it.

ESTJs aren’t started easily by jump scares, but there are times when they can be caught off guard. They won’t usually jump in a way that others recognize, unless they are being playful and want others to believe they were truly shocked. ESTJs keep their emotions inside most of the time, and so even if they are startled it doesn’t always show outwardly. Most horror jump scares can be a bit predictable for them, so they don’t get surprised all that easily.

ISFJs actually can be a bit jumpy, especially with movies and situations where they are trying to startle someone. They might find themselves thinking about others things and so it leaves them open to being surprised. When it comes to intentional jump scares the ISFJ usually does become caught off guard by them. It doesn’t often bother them all that much, but it can be a bit amusing and even turn into a playful game in some ways.

ESFJs can sometimes startle easily, especially with intentionally jump scares. They are sensitive to the world around them and sometimes this sensitivity causes them to get caught by jump scares. There are situations where the ESFJ might be watching a horror movie and they don’t want to be started by it, so they will pay attention and prepare themselves for when the scare will occur. When it comes to someone jumping up from behind them, ESFJs usually do find themselves startled.

ISTPs are very aware of the world around them, and so jump scares usually don’t get them easily. It takes more than a cheap scare to really startle ISTPs, especially since they have become accustomed to it. They enjoy things that excite and thrill them, so they might actually seek out frightful things. ISTPs might enjoy certain events or movies that are scary, in hopes of finding one that can actually catch them off guard.

ESTPs actually can be easily caught by jump scares, but this is usually because they want to be. They are very aware of their surroundings and in tune with the physical world. They pay attention and observe what is going on, which helps them prepare for any possible scares. The fact that ESTPs are good at paying attention to what is around them, helps them to avoid being easily scared. While it might not be easy to startle them, ESTPs can sometimes intentionally let their guard down for the sake of the thrill.

ISFPs can become distracted easily, but they are very in touch with the physical world around them. They usually don’t startle all that easily, unless their minds are completely caught up in something else. Some horror movies can be a bit surprising for them though, and might leave them feeling a bit sensitive so that the jump scares do actually catch them. ISFPs are usually in tune with the physical world enough to avoid these scares, but there are times when they might want to be a bit shaken up for fun.

ESFPs don’t usually startle easily since they are so in touch with the physical world around them. If they are paying attention then it is truly difficult to catch the ESFP with a jump scare. If they are letting their guard know however, and feel distracted by something else, this is when they can become startled. ESFPs might enjoy a good jump scare, since they like seeking out new thrills and challenges. ESFPs hate being bored, so sometimes they enjoy horror movies and will allow themselves to be a bit startled.