The Way You Feel About Settling, Based on Your Personality Type 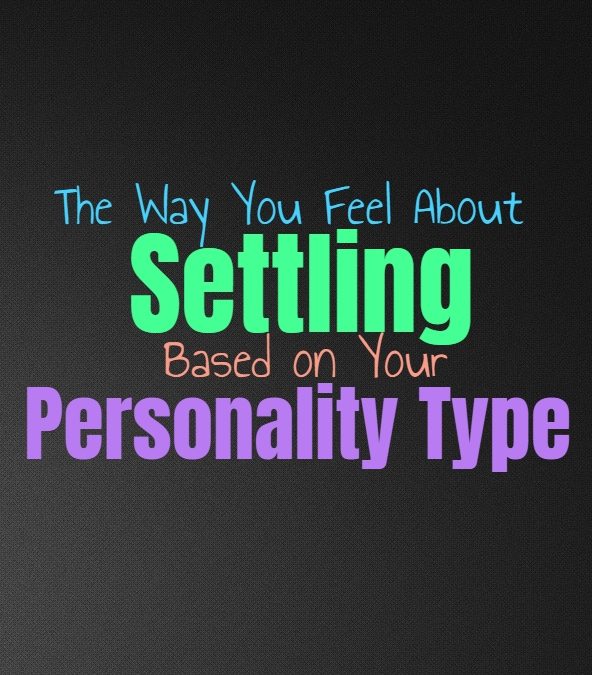 The Way You Feel About Settling, Based on Your Personality Type

For some people the idea of settling means giving up on their dreams and desires, while for others it holds a different meaning. For some people settling simply means accepting something more stable, something which they can be sure of. Here is how you likely feel about settling, based on your personality type.

Initially the idea of settling can seem like a bad thing to the INFJ, and feels like they are giving up on what they truly want. They don’t like the sound of settling, although the actual process might not be horrible for them. INFJs do often have lofty dreams and goals, sometimes bigger than anyone would be capable of handling. Because of this they might actually benefit from finding some sort of middle ground, some sort of balance and means of achieving these goals on a smaller scale. This isn’t settling in a bad way, instead of means learning to be happy with what they have. For INFJs settling isn’t really the worst thing, it is simply something they can be averse to at first.

ENFJs don’t like the thought of settling for less than what they want and deserve. ENFJs work hard to achieve a certain level of perfection, not wanting to accept anything less than this. They focus on being able to please their loved ones and achieve everything they want in life. They can be rather strong-willed and focused people, never really wanting to settle for anything less than these high expectations. If the ENFJ has moments of settling, they want to be sure they are making a smart choice by doing this. For them the times when settling is acceptable is when it is for the sake of someone they love and their happiness.

INFPs really don’t like the idea of settling at all, and can often be rather determined when it comes to the things they want. INFPs have so many dreams and while it might take them time to go after these things, they don’t want to settle. The idea of feeling stuck settling for anything less than their desires and passions, can leave the INFP feeling a bit disillusioned and unhappy. It can be hard for them to settle in just about any situation in life, since they want to be able to have the world opened up to them.

ENFPs don’t like the idea of settling, especially when it comes to their dreams and desires in life. They can become rather unhappy with their life and choices if they feel like they are forced into settling. When the ENFP truly wants something they can be stubborn about achieving this and being able to avoid settling. For the ENFP maintaining these dreams and not simply settling for less, is actually rather important. When they care about someone they also don’t want to settle for less than their goals in a relationship.

INTJs are not likely to settle when it comes to the things they truly want. They are strong-willed and determined people who will do whatever it takes to analyze and problem solve. When they need to overcome some sort of hurdle in order to get what they want, the INTJ simply takes the time to figure out the smartest actions to take. For INTJs settling just means giving up and not using their minds efficiently enough in order to get what they want or need out of a situation. They are capable of intelligent compromise, but for them this isn’t settling and should leave both parties satisfied with the results.

ENTJs aren’t ones to settle, especially when they have goals they want to achieve in life. They will do whatever it takes to get what they want, pushing themselves to figure out ways to problem solve. When it comes to overcoming hurdles the ENTJ is not afraid of taking on these challenges and finding new ways to overcome them. They are not likely to settle in life, wanting to be sure they are obtaining the things they truly want all around.

INTPs don’t like settling on important matters but there are some instances where it doesn’t bother them. When there are matters the INTP knows they are correct on, they don’t like settling and just backing down from the fight. They will continue to stand their ground and won’t settle for anything less than accuracy and precision. When it comes to certain things in their relationships they are often fine with compromising or settling in order to avoid discord, but it does depend on the situation and how important it is.

ENTPs don’t like the idea of settling and in most situations this tends to bother them. They believe in going after what they want and don’t like ending up feeling stagnant. For the ENTP ending up trapped in the same position comes from settling for things, instead of fighting for what they actually want. ENTPs are not likely to settle, especially with the things which are deeply important to them. They have a hard time finding ways to compromise when they are younger, for fear that this might turn into settling. Most ENTPs do find the balance as they mature, and figure out ways to make compromises without settling for less than what they truly need.

ISTJs don’t like settling when it comes to the more important things in life, but they aren’t incapable of compromise. ISTJs often have more simple goals and don’t need things which are foolish or impractical. For them settling just means they have found another path to take, and other means of achieving what they want. When it comes to their more serious goals the ISTJ won’t settle for less and will push themselves to achieve these things no matter what it takes.

ISFJs definitely don’t like the idea of settling when it comes to their goals or what matters to them. They want to be focused on achieving these goals and don’t want to let anything stand in their way. When it comes to their loved ones they are often willing to settle and make compromises in order to make them happy. ISFJs also dislike discord and want to find ways of avoiding any type of struggle in their environment. Because of this they might be more inclined to settle in order to avoid an argument or any trouble around them.

ESFJs really don’t like settling, since they have a perfectionist nature. When it comes to having things a certain way they can be rather particular and don’t like settling for less than what they have for expectations. ESFJs care about impressing their loved ones and want to be able to provide for them, and so they don’t like settling or backing down when things don’t go as expected. They do however, have times when they are willing to settle or compromise for the sake of someone they love and their comfort.

ISTPs don’t really like settling since they believe in living in the moment and going after what they want. For them sometimes changing course in order to explore something new and more reachable is worth it, but to them this isn’t really settling. ISTPs simply want to feel free to live in the moment and soak up the world around them. They are willing to fight for what they want, not afraid to take risks.

ESTPs are not fans of settling, instead they believe in being fierce in their efforts to get what they want. They prefer to live in the present and go after whatever inspires and excites them most. Sometimes this means bouncing around and changing things last minute, but for them it isn’t about settling. Even though the ESTP might decide to try a different path, this doesn’t mean they are settling it just means they want to experience something in the moment rather than wait it out.

ISFPs don’t like settling but they can sometimes become accustomed to the simpler things. They prefer to live in the present and experience life as it comes at them. ISFPs don’t like feeling as if they have to change their minds based on what someone else wants though, and for them this would feel more like settling than anything else. They follow their own sense of inner morals, wanting to achieve the things which fulfill and inspire them.

ESFPs definitely don’t like settling, since they can be rather stubborn when it comes to getting what they want. When the ESFP sets their sights on something they don’t want to feel like they are being held back or asked to settle. They are willing to compromise in order to make their loved ones happy, but settling will leave them feeling smothered and unhappy. ESFPs need freedom and the ability to go after their desires without being restrained.