Do You Experience Buyers Remorse, Based on Your Personality Type 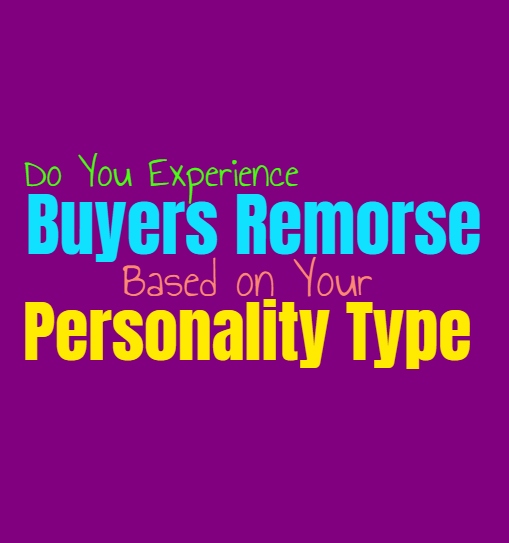 Do You Experience Buyers Remorse, Based on Your Personality Type

Most of us have done it, we get excited about a purchase and then afterwards realize we may have jumped into it without thinking. You regret spending that money and experience something called buyers remorse after it is all over. Some are more inclined to experience this feeling than others are, depending on their personality. Here is your likelihood to experience buyers remorse, based on your personality type.

INFJs do sometimes experience buyers remorse, especially if they purchased something when they were feeling a bit down. They can get excited about certain items and find themselves buying things without fully realizing how much they are spending. When the INFJ goes to pay bills and realizes they have left things very tight, this is when they experience a bit of buyers remorse. They feel a twinge of guilt for spending money on themselves, and this comes from their constant desire to please others and be a good person. INFJs aren’t great at being selfish or considering their own needs, and so they do feel guilty when this happens.

ENFJs do often experience buyers remorse, especially when they have spent money on themselves. When they spend too much money trying to make themselves feel better, they often regret this afterwards. ENFJs often feel a sense of guilt when they do things without considering how it might affect others, and so they might experience buyers remorse fairly often. Sometimes retail therapy can make the ENFJ feel better at first, but later on this can often become something which makes them feel bad about their actions when really it shouldn’t.

INFPs do sometimes experience buyers remorse since they can jump into things without entirely thinking about it first. Most of the time though, INFPs are okay with their purchases and don’t want to let it get to them too much. If they wanted something then they don’t like feeling guilty about buying it. INFPs are independent minded people who would rather be able to make their own choices without people judging them or behaving as if they should be acting differently. When it comes to buyers remorse, INFPs are likely to do this when they have gone overboard and now are struggling to pay bills.

ENFPs don’t often experience buyers remorse, unless they purchase something which doesn’t work out as they had hoped. If they buy something which isn’t working properly or gives them trouble, in these situations they will experience buyers remorse. ENFPs aren’t likely to feel guilty simply for spending money though, since they prefer to be more independent in their lives. ENFPs like making their own choices and s if they want to spend money they don’t like feeling bad about this.

INTJs prefer to make smart choices and don’t want to just jump into things without being sure about their actions. For them buyers remorse is a rare thing to experience, since INTJs like to purchase things they sincerely want or need. They don’t like using retail therapy as a means of feeling better, since this can feel irresponsible. When the INTJs commits to something they don’t usually feel a sense of guilt or regret about this, so for them buyers remorse is certainly a rare thing to experience.

ENTJs don’t often experience buyers remorse, since they like to be sure of their purchases beforehand. When the ENTJ buys something it is often because they need or sincerely want it. They don’t like just jumping into things, they are intelligent and responsible people who want to always be prepared for the future. When the ENTJ purchases something they are not likely to feel a sense of buyers remorse, since they don’t just jump in without thinking.

INTPs do sometimes experience a bit of buyers remorse when it seems like their purchase was wasteful or pointless. They can get caught up in the idea of something without entirely thinking it through. INTPs sometimes become excited about something and might feel like investing in it is a good idea, and when this happens they might feel buyers remorse afterwards. INTPs are usually good at figuring out where to invest their money but they do get excited about ideas sometimes and don’t follow through with making profits from it.

ENTPs don’t like to get hung up on doubts and so they do try not to let buyers remorse get to them. They might get excited about something and spend money which they aren’t too happy about later one, but for the ENTP this can be a learning experience. They just go with it most of the time and try their best to make the most of their purchases. ENTPs don’t like feeling as if they owe someone else an explanation, and so for them buyers remorse is definitely something they try to avoid.

ISTJs try their best to make choices which they won’t regret and so buyers remorse isn’t common for them. Most of the time ISTJs are good at deciding whether or not they should purchase something beforehand, and they don’t like just jumping in without thinking it through. ISTJs are practical people and so they for them buyers remorse really isn’t a common thing for them to go through or experience.

ESTJs aren’t really prone to buyers remorse, since they don’t like making purchases which are impractical or foolish. Even when the ESTJ purchases something for themselves which they want, they make these choices smartly and know it is something they both deserve and will be happy with. They aren’t the type of people to jump into a purchase and regret it later one. So for the ESTJ buyers remorse just isn’t something they are commonly going to experience.

ISFJs are likely to experience buyers remorse when they have spent more on themselves than they usually do. They might go through moments when they feel like they need a little retail therapy, but ISFJs often regret this afterwards. They feel bad if they do anything which might seem selfish or cause their loved ones to miss out on something later on. So for the ISFJ buyers remorse can be strangely common, especially when they spend money on themselves.

ESFJs do sometimes experience buyers remorse, especially when they spend money on themselves. ESFJs can sometimes spend money to make themselves feel better when they are under stress, but then feel bad for this later on. When ESFJs do anything which is a bit selfish in nature, they often feel a strong sense of guilt over this. They don’t like doing anything which might make things harder on their loved ones, and so sometimes they experience a sense of buyers guilt.

ISTPs don’t usually experience buyers remorse, since they prefer to live with more independence than this. If they purchase something they likely shouldn’t have, the ISTP just wants to move on and not become too upset about this. They want to feel free to do their own thing and spend money how they please, without someone making them feel guilty about these choices.

ESTPs do occasionally experience buyers remorse, especially when they have gone through a stage of spending a lot of money. When they go through times of spending recklessly, they can feel a bit of buyers remorse later on when they are struggling to make ends meet. ESTPs try not to let this upset them too much though, since they prefer to live in the moment and enjoy things when they can.

ISFPs do sometimes experience buyers remorse when they have been a bit too reckless. ISFPs try their best to move forward from mistakes though, since they like to live in the present moment and not dwell on the past. When they are struggling a bit because they have spent money without really thinking it through, the ISFP will sometimes experience feelings of buyers remorse and regret.

ESFPs do sometimes get a bit reckless with how they spend their money, since they don’t like feeling held back. When they are excited about something or really want something, they are unlikely to take a step back and process whether or not they should purchase the items. Because of this ESFPs sometimes spend money a little bit recklessly, and so after they can experience a bit of buyers remorse.