ESFP Weaknesses, Flaws and Shortcomings: Where the ESFP Feel Challenged 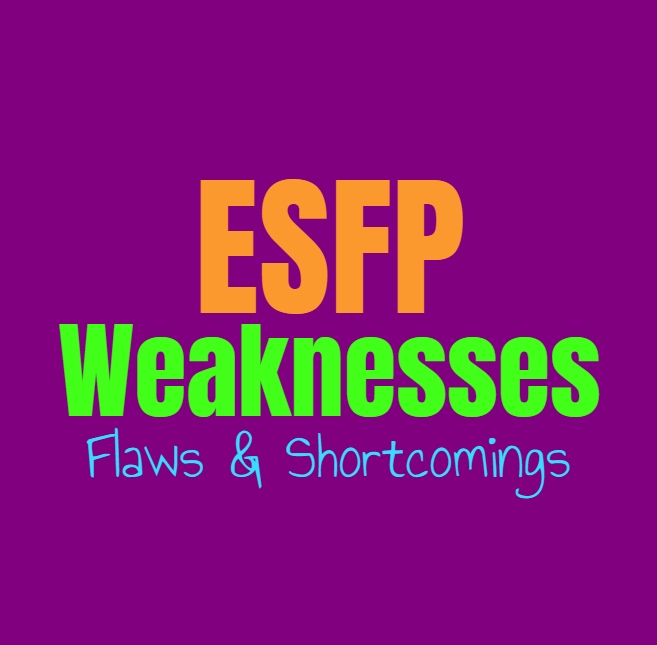 ESFP Weaknesses, Flaws and Shortcomings: Where the ESFP Feel Challenged

While ESFPs have some amazing and positive strengths, they possess certain weaknesses just like everyone else. For the ESFP it can be challenging to deal with certain criticism, and so sometimes accepting and recognizing their flaws is hard for them. They don’t want people they love to see them as weak or flawed, and really want to be seen in the best possible light. ESFPs just care about their loved ones and how they view them, which is why taking notice of these weaknesses or challenge areas can be hard for them. While it might not be easy, recognizing these areas where they could improve or grow, is the first step towards becoming a more well-rounded and self-aware individual.

ESFPs can struggle with planning ahead or really looking towards the future all that much. They prefer to focus on living in the present and want to enjoy things as they come. For the ESFP having to deal with making plans or handling schedules can be a bit of a challenge. They can get really caught up in the moment and want to seek out things which excite and inspire them. While they are passionate and curious people, the ESFP can sometimes be held back in life by this lack of future planning. They might struggle to figure out what they want to do for a career, or how to go about achieving some of those goals. Their desire to enjoy things in the here and now makes it hard to really see around the corner and towards the future. This doesn’t mean ESFPs are completely incapable of having goals, they just don’t always know how to execute them. Sometimes living in the moment causes them to make choices which can hinder these future goals, and keep them from really planning ahead for things. For the ESFP it often takes having sometimes they are deeply passionate about and focused on, for them to stick to a plan and really be capable of looking towards the future for what they want. This is more likely to happen as the ESFP gets older, and strengthens some of their weaker functions.

Can Be Sensitive to Criticism

ESFPs can really struggle when it comes to criticism, especially when it comes from their loved ones. They might even find themselves feeling hurt over some sort of perceived insult or criticism, when the person never intended it that way at all. ESFPs might even become upset by statements which aren’t directed at them, assuming that they are being insulted. They have a hard time when they feel someone is looking down on them or not accepting them fully for who they are. These sensitivities are part of what makes the ESFP more considerate towards others, as they don’t want to hurt people or leave them feeling offended. At the same time they can become so wrapped up in their own emotions that they fail to see what is going on with someone else. ESFPs are connected to their own inner emotions and sense of morals, wanting to follow what they believe is right and sometimes being rather stubborn about this in the process. While their stubborn qualities help them to achieve their present desires, it can also cause them to alienate people in the process. ESFPs follow those inner emotions and sometimes this is exactly what causes them to be so easily hurt by comments or criticism.

ESFPs can be easily bored and find it hard to really sit still for long periods of time. They want to seek out things which are exciting, and can be a bit reckless because of this. When the ESFP feels bored or stagnant, they want to find a way to really shake things up and keep themselves entertained. This causes them to seek out thrills and excitement in the present moment, and can create more reckless situations for them. The ESFP might jump into something without thinking about the consequences, just wanting to enjoy whatever they are being drawn to. They don’t often think about what is around the corner or how they will have to deal with this decision later on. Sometimes this means abandoning plans or errands, other times it can mean spending money lavishly on things they maybe cannot afford. For the ESFP this can certainly get them into trouble, especially when they find themselves bored or stagnant for too long and just want to find ways to shake things up.

ESFPs desire a lot of attention from those around them, and at times this can cause them to feel anxious. They dislike being ignored or feeling like their loved ones are not giving them enough attention. They want to feel close to people and while ESFP are often charming and lovable people, this can become draining at times. Wanting a lot of attention and feeling easily neglected can be a struggle for the ESFP, as well as for their loved ones. They can become bored easily and might seek out the people around them in order to make them feel better in the moment. This can cause them to appear a bit needy at times, or even demanding if they feel like they are being ignored a bit too much.