INTP Under Stress (Shadow Mode): The INTPs Unhealthy Dark Side 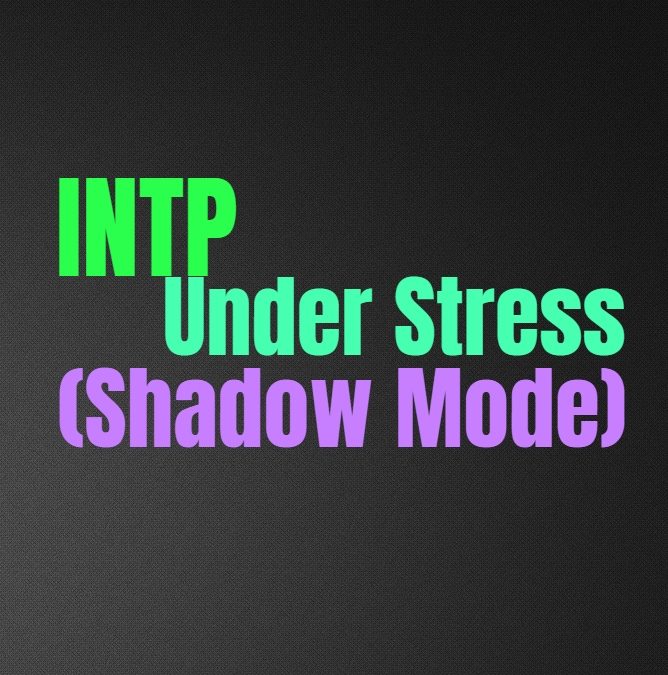 INTP Under Stress (Shadow Mode): The INTPs Unhealthy Dark Side

When it comes to being under times of stress, most times can go into their shadow mode. This can be a way to self-protect, but can also simply be because this person is feeling overwhelmed and no longer trusting in their natural instincts. For the INTP this can be a difficult to state of mind to be in, since they are naturally analytical people who do their best to understand the things which happen to them. If they don’t understand about being in their shadow they are likely to become frustrated with this change, wanting to understand why they feel so out of tune with their natural way of being.

The dominant function for the INTP is their Ti (introverted thinking) which makes them highly analytical and often factual people. They use their inner thoughts and minds to take apart information and dive into it on a much deeper level. This dominant function is the go-to for the INTP when it comes to making decisions and understand the world around them. They process information through their internal way of thinking, which helps them to uncover the truth where others might fall. This also makes the INTP excellent at problem solving, since they use all of the facts and details to help them figure out the smartest path to take. They use this time of thinking to process information and is what makes the INTP rather logical minded people.

Their auxiliary or second placement function is their Ne (extraverted intuition). They use this to see various patterns around them, which helps them explore different information. The INTP combines this with their introverted thinking, and this helps to discover new information and analyze it. Their intuition helps them to see all of these connections from the information, which is truly useful when it comes to making conclusions and uncovering the truth that might be hiding underneath layers of information. This also makes the INTP rather creative when it to their ideas and different theories they put together. This helps the INTP discover things that most people might be hesitant to even explore.

The tertiary or third function for the INTP is their Si (introverted sensing), which isn’t the most prominent for them but it is used. Their introverted sensing often displays itself by using facts from the past to make patterns with more future related information. INTPs also show this function by being nostalgic at times, reminiscing on past situations and events. Their minds can sometimes get caught up thinking about these things, analyzing whether or not they could have done something differently, or whether they should have found a different path.

The inferior function of the INTPs function stack is their Fe (extraverted feeling), which normally connects with the emotions of others. This can be a challenging one for the INTP to really strengthen, since they are more ruled by logic than emotions. They don’t make many decisions based on feelings or the emotions of others, even though they do care about these things. This often displays itself by the INTP second guessing their thoughts and feelings, wanting to know how the other person truly feels. They may replace the emotions with facts, analyzing the little pieces they recieve.

INTP In Their Shadow

The dominant function of the INTP is their Ti, when they are in their shadow they become more focused on Te. When the INTP attempts to dominantly use this function it can cause them to be more direct, and even a bit aggressive in their attempts to get things done. It can also cause the INTP to struggle with trusting people, especially those who possess dominant Te. Those people will seem like they are attempting to control others, especially the INTP. Because of this they want to avoid this type of person, or may even challenge them in some ways. They are likely to be more short-tempered when they are in their shadow, because this Te is presenting itself in confused and unhealthy ways. Attempting to organize everything, even the people around them, in hopes of getting things done and making some sort of real progress around them. They lose patience when it comes to people making mistakes, and appear much less forgiving and understanding than normal. This presents itself as authoritative behavior, the INTP attempting to be the boss and in control of those around them.

The second function of the INTP being their Ne, is replaced with Ni. For the INTP this can cause them to jump to conclusions, trying to come up with future ideas without using their natural means of doing so. They might get a “feeling” about someone or something, and find themselves analyzing this to the point of exhaustion. These feelings are rarely connected to facts or real evidence, but the INTP is following hunches which causes them to become a bit paranoid. In relationships this is often when the INTP starts to have their doubts about this person’s motives and behaviors, making them constantly question things based on “feelings” which they try to rationalize.

Where the INTP normally uses their introverted sensing, they become focused on extraverted sensing. This is an often weak function for the INTP, as they aren’t that connected with the outside world. Instead they may attempt to overcompensate, challenging people in physical ways and attempting to be more reckless. They won’t be using this to connect to the physical world in such a positive way, instead they might become impulsive and find themselves jumping into situations just because it should “feel good”. This definitely isn’t natural behavior for the INTP, and can get them into situations they regret later on.

The final function of the INTP is normally Fe, but in this case they start to use their Fi more strongly. This isn’t done in the most positive of ways, instead it causes the INTP to question themselves and their own inner emotions. They are likely to have doubts about their own behaviors, this inner voice of theirs turning to blaming themselves and others. The INTP starts to question their moral beliefs, and might become constantly on edge about their feelings or the feelings of others.

This often happens when the INTP is under times of extreme stress and self-doubt. When their own beliefs and inner knowledge are challenged or shaken in a serious way, it causes the INTP to feel overwhelmed. This can cause them to retreat into this shadow mode, often searching for new methods to help them solve these problems. Since their natural way of processing things and behaving isn’t quite working for the INTP, they start to resort to these other methods. When they are in their shadow they don’t behave like themselves, often seeming more aggressive and on edge with everyone around them.

For the INTP this shadow mode does often happen under serious stressful times, especially when they don’t see a way out of these struggles. Being unable to remove the stress from their lives creates a sort of shift for the INTP, sending them into their shadow mode and causing them to behave in much more unhealthy methods.