Are You Good at Keeping Your New Year’s Resolutions, Based on Your Personality Type 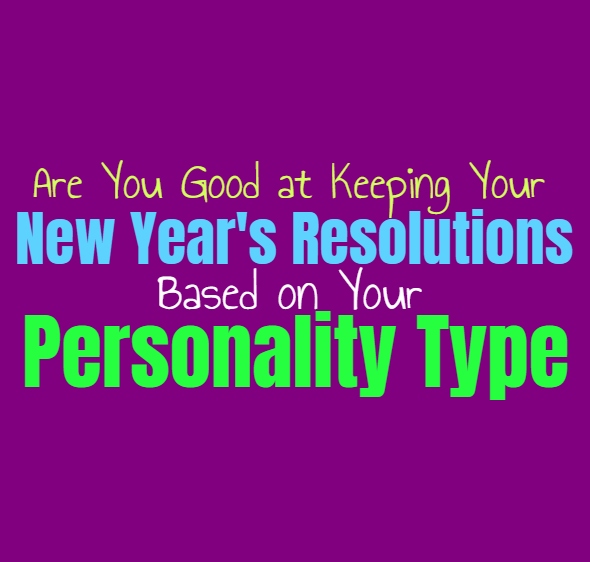 Are You Good at Keeping Your New Year’s Resolutions, Based on Your Personality Type

For some people maintaining their New Year’s resolutions throughout the year, seems a bit challenging. They might lose interested and find themselves moving onto something different before they even realize it. For others it seems much more important to uphold these resolutions, mostly because they feel like failures if they cannot. Here is how good you are at keeping your New Year’s resolutions, based on your personality type.

INFJs might become excited about some of their resolutions at the beginning of the year, and will try to plan out how to maintain these new ideals. They will often do their best to get a good start, but will likely find themselves distracted or feel like they lack motivation as the time passes. INFJs do better maintaining habits if they have someone close to them who can do it along side of them. For the INFJ it can be easy to lose motivation with these things, and sometimes this is because they lack a belief in themselves and their own ability to get things done and improve. While improving is something they always strive for, INFJs can be rather hard on themselves- just another layer to the paradox that is the INFJ.

ENFJs are often good at pushing themselves to get things done, and so they can maintain their resolutions for a while. They likely do their best to keep these things going and work hard to get the job done. When they make resolutions for the new year, the ENFJ wants to do their best to follow them and work hard to improve themselves. They might however lose inspiration in these resolutions, especially as their lives become busier and they have so many other things to take care of. For the ENFJ it is easier to follow resolutions which have to do with their loved ones, since they can sometimes neglect their own personal needs.

INFPs might become excited about their resolutions, wanting to find ways to improve and expand their horizons. They find themselves eager to try these new things and work towards improving themselves and their lives. INFPs definitely find it exciting to start out the new year with plans and ideas, but they have a tendency to lose interest fairly quickly. INFPs become bored easily and will bounce around from one thing to the next without fully realizing that they are leaving these old things behind. For the INFP resolutions can be hard to keep if they are things that the INFP can easily lose interest in.

ENFPs have a tendency to lose interest in things and change their minds fairly often, which makes it difficult for them to really keep up with their own resolutions. If the ENFP makes a few New Year’s resolutions that they are excited about, they will do their best to maintain them but will likely lose interest. Something they are excited about at first isn’t always going to hold up down the line. They do have a tendency to change their minds last minute and this often causes them to struggle when it comes to holding on to these resolutions they were once inspired by.

INTJs might not find the idea of making New Year’s resolutions all that enjoyable in the first place. They believe in going after what they want without having to make some sort of yearly pledge or plan. If the INTJ does decide to make resolutions for the year, it is often something they are sure about and will commit themselves to fully. INTJs don’t make choices without thinking them through and so if they have things they want to accomplish they will do whatever it takes to make it happen. For the INTJ it is important to hold up to their word and push themselves to succeed at everything they plan to do.

ENTJs might not find the idea of making New Year’s resolutions all that appealing, and might even find it to be a bit foolish. If they do make the choice to have resolutions for the year, the ENTJ is likely to think these things through ahead of time. They won’t make a plan for things they want to accomplish, unless they are sure about these things. When the ENTJ does make resolutions they are often good at holding onto them, and will do whatever it takes to accomplish their goals without allowing anything to hold them back.

INTPs can struggle when it comes to resolutions, simply because they find themselves distracted somewhat easily. They might make a plan to do something or follow a certain path, but they lose interest and are drawn in a different direction. This is simply because the INTPs mind is constantly running through so many different thoughts and ideas, and so sometimes they find themselves changing their opinions and wanting to explore a different option. INTPs don’t like being locked down to one certain way of thinking, which is something that causes them to struggle with New Year’s resolutions most of the time.

ENTPs aren’t likely to be all that good at keeping their New Year’s resolutions, mostly because they lose interest fairly easily. ENTPs might be excited about something in the beginning of the year, but that doesn’t mean they will feel this way months or even weeks down the line. They find themselves drawn in many different directions, mostly because they are curious people who can also become bored easily. They like to explore different paths and options and so maintaining resolutions can be a bit difficult for them.

ISTJs are often good at keeping whatever resolutions or promises that they make. They don’t like committing to something unless they are sure they can maintain this commitment. For the ISTJ it is important to stand by their word and not simply give up when things get a bit difficult. If they make resolutions for the new year, the ISTJ will do whatever they need to in order to maintain them. They are likely to only make these resolutions if they are things they sincerely want to follow through with, not just flighty whims.

ESTJs aren’t usually interested in making New Year’s resolutions, simply because they would rather focus on getting things done when they need to. For the ESTJ it is better to just live their lives working hard, instead of simply making resolutions at the start of the year. If they do decide to make resolutions the ESTJ is often good at following through with them. They don’t make commitments or promises unless they are prepared to get them done.

ISFJs might make resolutions for the sake of pushing themselves to get certain things done, but they sometimes find themselves struggling to maintain them. If the ISFJ makes resolutions which are a bit selfish in nature, it can be truly challenging for them to keep up with this. They become so focused on taking care of those around them, that the ISFJ sometimes neglected their own personal needs in the process. They might be excited about these resolutions at the start of the year, but find themselves taking on too many other things as time goes on.

ESFJs are good at resolutions when it comes to their loved ones and taking care of them, but when it comes to themselves they can struggle. They are good at committing to things and work hard to get the job done, they just don’t always tend to their own needs the way they should. For the ESFJ some personal resolutions can become neglected as times goes on, simply because they are tending to the needs of their loved ones and take on too many other tasks and chores to really be capable of maintaining their resolutions.

ISTPs aren’t always good at maintaining New Year’s resolutions, mostly because they live so much in the present. They might make plans for the future, but they often change their minds when things actually happen. ISTPs find themselves wanting to experience new things and don’t like feeling restricted by plans they have made in the past. Because of this the ISTP is likely to lose interest in these resolutions and find themselves exploring something completely new instead.

ESTPs definitely aren’t good at maintaining their New Year’s resolutions, mostly because they become distracted by other things. They live so much in the present moment and so it becomes difficult to really plan ahead with certain smaller details. For the the ESTP New Year’s resolutions might be exciting at first, but they find themselves losing interest in them as time goes on. They likely cannot keep up with them for all that long, since they find themselves wanting to explore other options and ideas.

ISFPs aren’t usually good at keeping up with their New Year’s resolutions, mostly because they become distracted by other things. ISFPs are free-spirits who enjoy taking life one step at a time. For them it become draining to have to keep up with schedules and so resolutions have a tendency to fall behind for them. They might feel a bit bad about this for a while, but ISFPs just don’t like feeling restricted or like they cannot change their minds about something.

ESFPs aren’t good at keeping up with their New Year’s resolutions, mostly because they become bored of them. ESFPs don’t like feeling restricted by anything and want to feel free to change their minds and explore different options in life. They live so much in the present moment and so holding onto past resolutions can be challenging for the ESFP to really keep up with. They find themselves wanting to follow their hearts and go wherever the inspiration is, and so resolutions aren’t usually easy for them.