The Biggest Turn Off For Each Myers-Briggs Type 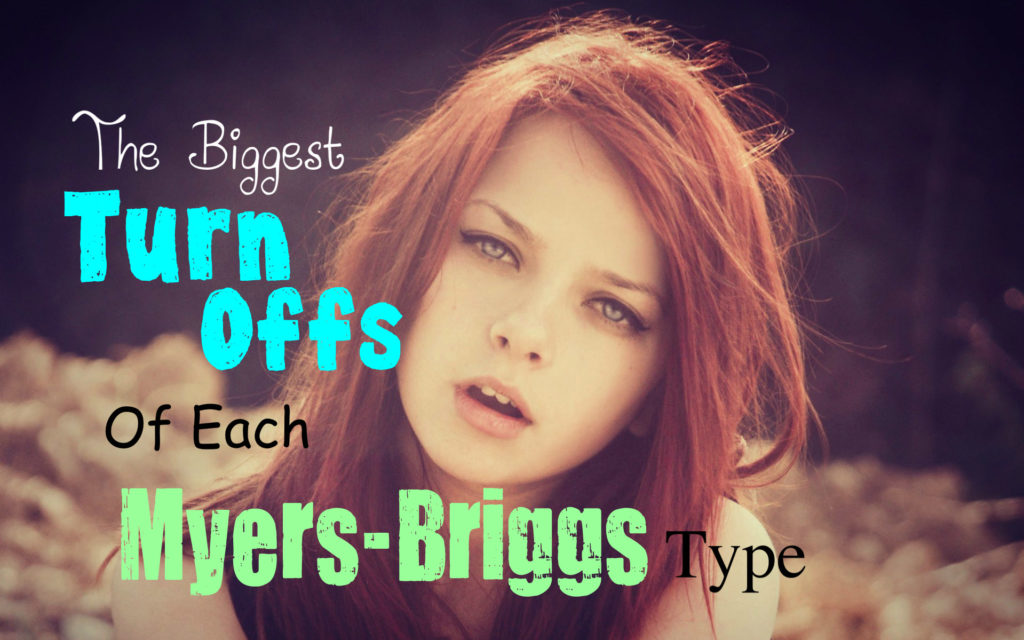 The Biggest Personality Turn Off For Each Myers-Briggs Type

We brought to you The Biggest Personality Turn On For Each Myers-Briggs Type and now it is time for the things that turn each type off. Each person finds themselves turned off by certain personality traits and these reactions can be related to personality types. So here is the quality you are most likely to find unattractive based on your Myers-Briggs type.

Arrogance and insensitivity are the biggest turn offs for an INFJ. When someone treats others poorly and acts as though they are better than them, the INFJ will become disinterested and even disgusted by that person. Few things will anger an INFJ more than seeing someone be mistreated by an individual who acts superior to them. This is an instant personality turn off, and will definitely cause the INFJ to lose interest in a person.

INFPs are strongly turned off by people who are extremely superficial. They will find themselves disgusted by a person who lives only for materialistic things. INFPs enjoy depth and meaning, which makes surface centered people very unattractive to them. If someone is shallow and does not show signs of curiosity, that is definitely a major turn off for the INFP.

ENFPs enjoy their freedom and are extremely turned off by anyone who attempts to control them. Trying to manipulate or force them into something will instantly push the ENFP away. They enjoy moving at their own pace and absolutely despise anyone who tries to force them into anything. Allowing an ENFP to have their freedom is actually very attractive to them. An individual who strives to gain control over the ENFP or anyone else around them, is going to turn them off completely.

INTJs are truly turned off by people who are small-minded and closed off. They dislike when people are incapable of comprehending them and will be disinterested in shallow or clueless people. INTJs are very turned off by individuals who are small-minded and incapable of seeing other people’s points of view. INTJs enjoy people who are intelligent and well-spoken and who thrive to understand the truth about things.

People who are dramatic and whiny are extremely unattractive to ENTJs. Causing foolish drama or blowing things out of proportion are major turn offs for them. ENTJs enjoy people are rational and capable of controlling their emotions. If someone is over the top it appears self-centered and obnoxious to most ENTJs. They do appreciate having fun from time to time, but they dislike when people demand attention by using silly drama.

INTPs are extremely turned off by someone who attempts to manipulate them. An individual who is entirely dishonest is going to be rather unattractive to INTPs. They enjoy people who are self-aware and capable of understanding them without trying to push them too far. INTPs crave understanding on every level and feel completely betrayed by someone who attempts to manipulate a situation. Dishonesty and neediness are extremely big turn offs for INTPs.

ENTPs are turned off by people who express an obvious ignorance in their personality. They crave knowledge and enjoy being able to communicate with open-minded people. If someone is completely ignorant and incapable of opening their mind to new experiences, the ENTP will be very turned off by this. They enjoy pushing buttons and stretching the limits, and the ENTP cannot do this with someone who is willfully ignorant.

ISFJs dislike rude people who lack proper manners. To them acting appropriate in all situations is a way of showing that you respect and care for others. Someone who doesn’t use manners and show respect for others is a huge turn off for ISFJs. They enjoy polite and kind people who actually consider the feelings of others and are capable of communicating properly.

ISTJs enjoy reliability and will often be turned off by someone who is flighty. If a person doesn’t seem aware of their surroundings or what it means to be socially appropriate, the ISTJ will become quickly disinterested. They are turned off by silly or clueless people and enjoy serious intellectually driven individuals.

ESTJs are turned off by clutter and mess, and will often be grossed out by an individual who doesn’t maintain themselves. Someone who is sloppy and all over the place is really unattractive to ESTJs. They are often drawn to people who can be a bit spontaneous and out there, but dislike if someone cannot clean up after themselves.

ISTPs are extremely turned off by clingy behavior and insecurities. They enjoy their freedom and dislike if someone attempts to control them or fawn all over them. They enjoy people who are confident in themselves and know exactly what they want. If someone is clingy and incapable of leaving them be, the ISTP will become very turned off by this behavior.

ESTPs dislike people who are boring and incapable of keeping them entertained. Someone who is too readily available to them all of the time, is going to be very unattractive to an ESTP. They crave excitement and enjoy people who can keep them guessing. If someone is dull and cannot keep the ESTP intrigued they will be instantly turned off by this person.

ISFPs are tender individuals who truly dislike cruelty and dishonesty. If someone is harsh or mean to the ISFP, they will be completely turned off by this behavior. ISFPs will also be disgusted by someone who is mean to other people and especially animals or children. They enjoy people are kind and complex and are displeased by cruelty and hatred.

ESFPs despise being ignored and will often be turned off by someone who attempts to take their spotlight. Being ignored is one of the biggest turn offs of an ESFP and they will quickly become frustrated with this person. ESFPs enjoy excitement and intrigue and will also be turned off by anyone who is too boring or self-centered.